Gutless McInnes Is Done. He Accepted Defeat Before Aberdeen’s Game Kicked Off Yesterday. 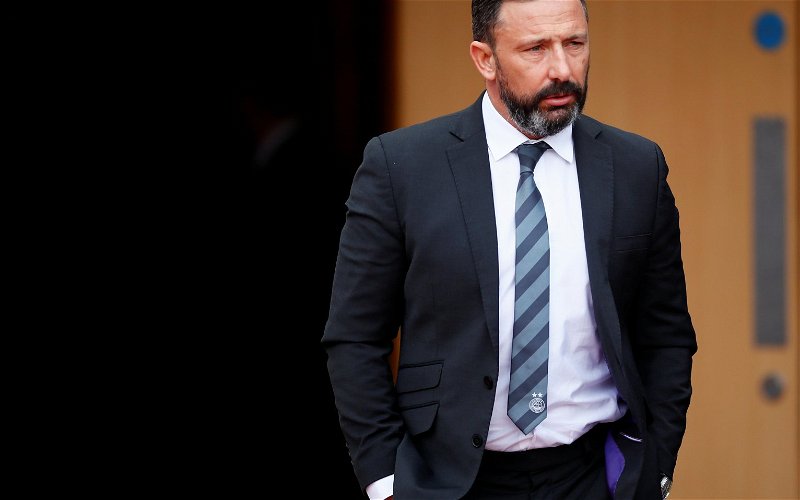 Derek McInnes and his team didn’t stand a chance at Ibrox yesterday, and that had nothing to do with the opposition being brilliant or with their mammoth injury issues. Derek McInnes’ side were doomed because he had no faith whatsoever that it was worth turning up.

How do we know that? He said so last week.

McInnes speaks too effusively about the Glasgow clubs. He should be seeking to overhaul them, but he lacks the ambition to even think that way about it. This is what he said in midweek, where he conceded the league title a half dozen games into the campaign.

“I think when Celtic and Rangers are doing their job in the league and recruiting well – and they’ve obviously got two very good managers in place – with the money they’ve got, it’s difficult for any team to compete with these clubs through the league. So the cups offer us the best chance.”

Those comments were made at the pre-match presser before the Hearts game, which his team lost. Those remarks, when viewed after the match, have rendered their entire season meaningless, because he’s given up challenging for the league.

Players are not going to run through walls for a manager who has chucked it, which he clearly has.

With Aberdeen fans absolutely fuming over yesterday’s result he insulted them further by saying something similar.

“As I have said if Rangers and Celtic are doing their recruitment well and spending their money wisely and have good managers in place, they will be the teams who fight it out at the top of the league. You can see that Rangers are in a good place. They have got a good manager, they have spent enough money again this summer and they seem to have spent it well on their squad. As I said prior to this game I do think that they will be up there challenging Celtic and maybe for a bit longer this season.”

Where did these gushing words of praise get published?

Not, as you might expect, in The Daily Record or in one of the tabloids … no, that was on the Aberdeen official website, that was the reaction he chose to put out through the club’s own media.

Fans don’t want to read that kind of nonsense after a game they’ve lost heavily against a despised rival.

Fans at Aberdeen, who have a realistic expectation of their club being the second biggest club in the country whilst they put in place the infrastructure to challenge Celtic, don’t want to read this kind of rot, where their manager settles for being third.

They’ve had enough of that, and with the death of Rangers they realised their time had come to be more.

But under this guy? Not a chance in Hell.

They have played seven games and won just three in the league. Their League Cup run is already over, before Hampden. A lot of this talk is pure deflection from a hapless manager who has scandalously underachieved and for whom failure has become acceptable.

I have never believed that the challenge – when it does emerge – would emerge from that club.

I always believed we should look east, to Edinburgh, or north for it. It was even possible that with all those watching for “Rangers coming” that it might creep up on us and we’d find ourselves in a fight without even realising it.

But what a state those three clubs are in right now.

There is no prospect of any of them mounting a threat to us under their current management. For Aberdeen, a club who’s fans really do believe that it’s time for a new power in the game here, that’s more than just a disaster, it’s a tragedy.

He’s been there six years.

A League Cup is their sole take from that period.

It’s high time they got shot of this geezer and brought in someone hungry, and who knows they can do better than this.