Here’s What The Hacks Don’t Want To Admit About This Celtic-Sevco FIFA Ratings Nonsense. 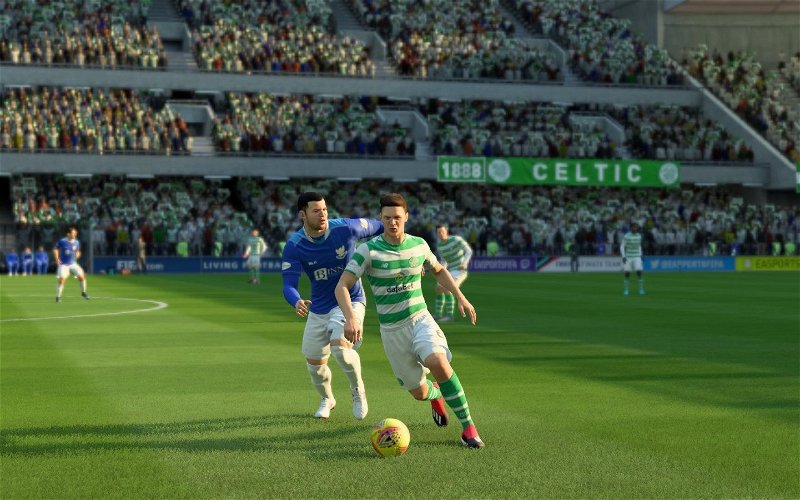 Wow. Have you ever read such dreck in your life?

You know why the media isn’t splashing those facts in the headlines, although there are dozens of articles gleefully reporting them?

It’s because the Celtic sites have turned the mockery dial up to ten these last few weeks and the hacks don’t dare.

This has been the fortnight in which we’ve had headline boasts about a month of YouTube numbers, comparisons between Kent and Eden Hazard, nonsense about shirt sales and film extras making the news for saying that “Rangers” were one of the best things about Scotland. (In the same story another extra was reported to have said “safety” … he’s never been to certain parts of Castlemilk after dark I guess.) Our mockery is well pitched. It is earned.

I like to play video games in my spare time.

They should help me relax, but in truth I’m a fan of genres which don’t allow for that. I’m a management sims fan and a strategy games player, and those aren’t the sort of games you relax with. I do enjoy FIFA for the odd kick-about but I’m not an obsessive player, and can take it or leave it.

My interest in the Football Manager titles goes back years; indeed, I’ve bought every version since it changed from Championship Manager to the current iteration. The number of hours I log in any given year is probably unhealthy and on top of playing I like to check out the forums and the sites for people who make the fan updates and additional graphics, and every year there are arguments about this player and that player or this squad and that squad.

It’s the same with FIFA. I don’t much bother with their fan community, but I read chatter on it from time to time and last year I read a superb Guardian piece on their Long Reads section about the making of the game, and reading that their coders get actual death threats from people unimpressed by the ratings of their favourite players … that’s nuts.

To me, it is very hard to obsess over unless you are the sort of person who obsesses over fluff.

Let’s be honest though, the idea that Defoe is rated more highly in FIFA 2020 than any other player in Scotland but for Forrest is a bit of researcher bias, typical EPL fan-boy guff and that shows you how seriously (or not) you should take this whole thing.

Celtic fans know all this. The media apparently still has to be reminded of it.

There’s a lot this nonsense about out there; Football Manager gets this treatment every year as well.

Last year someone in a press room with way too much time on their hands simulated the SPL and the Ibrox club won it and that somehow became a news story.

Someone else went into the data and reproduced everyone at Ibrox and Celtic Park’s alleged salaries to show their club was paying almost as much in wages as we were … this is beyond pathetic. But it’s also kind of what we’ve come to expect from the press.

This is what no-one in the press apparently wants to say, although you do all know.

None of it matters, because none of it will prevent our march towards nine in a row.

It’s just another Ibrox feel-good thing … but it will not make a blind bit of difference to where the trophies end up.

None of it ever won a single actual, real football match, nor deprived a team of points nor made the slightest bit of difference to a league race.

These things will be won where they always are, on the pitch where all the hype in the world won’t help our rivals.