So Keith Jackson did a piece on Lennon’s relationship with Brown today, and in that piece he decided to open up with an attack on the bloggers.

I am not terribly surprised.

The media views the blogs with as much contempt as the bloggers view them.

For our part, we simply want to see professionalism and objectivity in the newsrooms.

They just want rid of us entirely.

The bloggers are the biggest threat to the cushy existence of people like Jackson that has ever existed.

These “opinion formers” were blown out like a birthday cake candle in 2012 when the fans got their act together and turned the clubs away from a catastrophic mistake which would have routed the very idea of sporting integrity out of the game entirely.

The mainstream media has never recovered its position.

“There was a nasty rumour doing the rounds on the internet just a few weeks ago of some monumental bust-up between Neil Lennon and Scott Brown,” this piece begins.

And I know those rumours were out there, I read them. I didn’t necessarily believe them, but I read them. Where I find this a little hard to stomach is that the media’s stock in trade at the moment is rumour and innuendo. Jackson has written enough of them himself over the years.

This is how the piece went on.

“Like so much of the toxic guff which spews out online – very often placed there with malicious intent by grown men of stunted intellect – this sensationalised split turned out to be no more than a figment of an attention seeker’s imagination.” 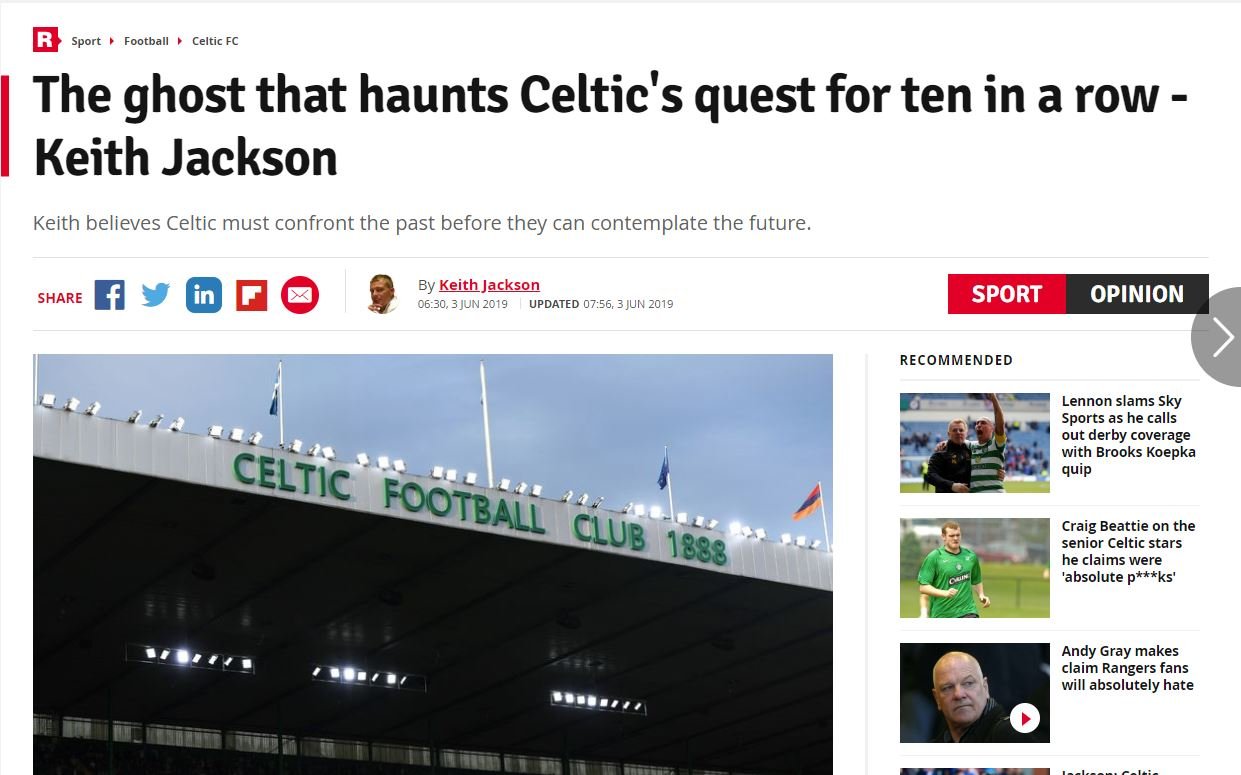 That article was full to the brim with malicious intent and toxic guff. It was loaded down with nasty rumour.

“More curious still, this wilful distortion appeared to emanate from within the bosom of Celtic’s own virtual community along with the cursory ‘donate here’ appeal. It was all very mysterious.”

Here’s the thing; it’s one thing to accuse people of getting their facts wrong.

It is entirely another to accuse them of “wilful distortion”, or to put it in the vernacular most people are used to “telling lies” and the implication is that these lies were designed to destabilise our own club … and make money.

The dig about “donate here” is pretty standard tactics from those who criticise the new media.

There are running costs. Those of us who do it for a living have to actually make a living … and there are only three ways to do it. Donations for those who can and want to support us, advertising on the sites or some form of paywall.

99% of us reject, outright, the idea of a paywall … our stuff is and will always be free and the beauty of the Donate button is that if people want to support us of their own free will then they can do so. Slagging people off for that is a cheap snark, and a demonstration of contempt not only for the blogs but all our readers, and especially those who have supported the sites down through the years.

But if Jackson wants to get on to the subject of “wilful distortion” he might want to look back through his own prior work, and especially this article; 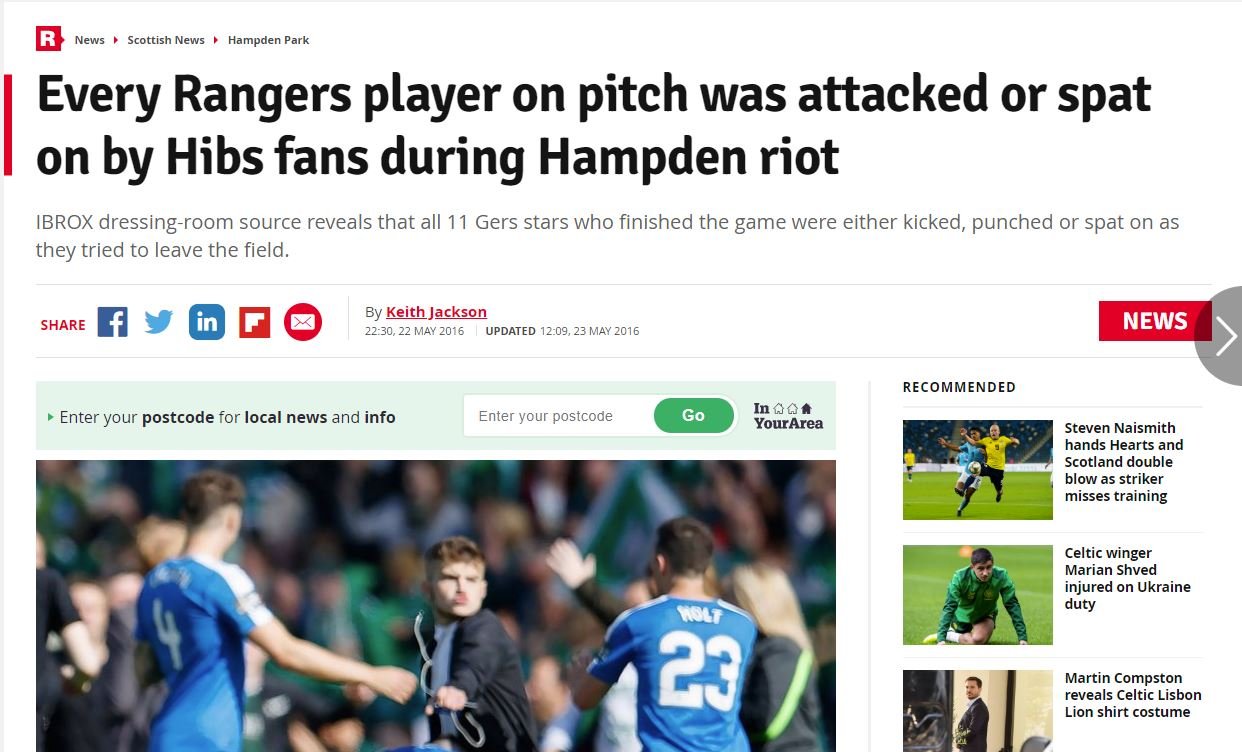 Somebody “wilfully distorted” on that one; was it the dressing room “source” or the writer of the piece? That the writer’s attention was drawn to the lie within hours – from no less an individual than Kenny Miller’s missus – is an incontrovertible fact.

That the initial story has never been withdrawn nor any apology made for it is also a fact. So you tell me.

Here’s the thing; Jackson’s article is supposed to be about the manager praising the contribution of the club captain.

You have to wade through all this muck in order to find even a hint of that in the piece, and what truly astounds me is that aside from a handful of Twitter goons the Celtic support weren’t the ones writing that Brown was past it in the first place … that spiteful commentary was coming from people in the press boxes.

And this is why Jackson has gone on the offensive against the bloggers, because this notion that Brown was “finished” was so prevalent in the mainstream media that even these legendry purveyors of naff opinions and unfiltered bullshit are embarrassed by it.

Brown has shown them up and Lennon was quite right to remind them of that yesterday as well … not that his comments to that effect made it into many of the headlines.

“It is so dangerous to write Broonie off,” Lennon reminded them, and it’s not the first time in recent years that a Celtic manager has had to do that. “There was a moment in the second half when he went on a run at Ibrox and it looked like Scott Brown of 21. It was awesome, absolutely awesome.”

On the criticism itself, he said this; “It’s ageism. Pure and simple ageism.”

What Lennon didn’t say but should have is that it’s funny that this type of criticism and ageism is never deployed at players like Steven Davis and Jermaine Defoe, both older than Brown, and both on the losing side last Sunday.

The media thinks we’re mugs, but this is why nobody believes a word they write anymore.

If the bloggers occasionally get it wrong that’s par for the course considering the output some of us have.

But to be wrong so consistently, every single day … that requires real skill.

Thankfully, we have Scottish sports journalists – people like Keith Jackson – to show us how its done.