Alex Rae’s Comments On The Christie Tackle Are Risible From A Notorious Boot Boy. 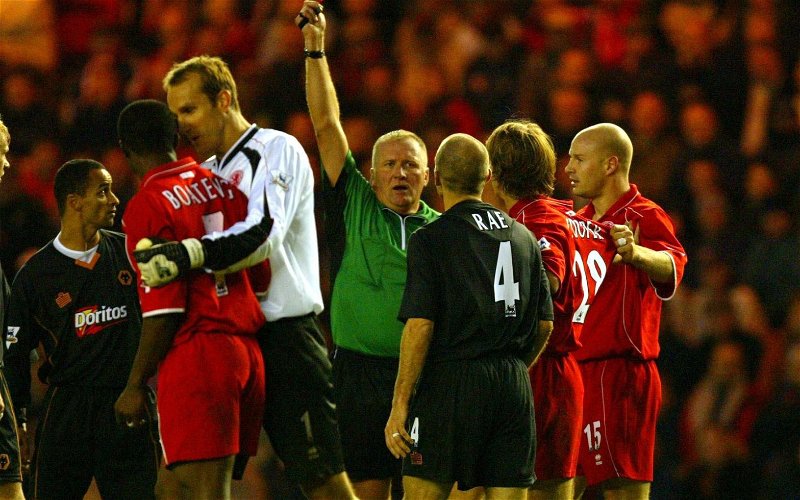 Alex Rae has described Ryan Christie’s tackle at the weekend as “as bad a tackle as you’re going to see,” and suggested that it was a leg-breaker.

Let’s not beat around the bush here, Alex Rae is incapable of giving a balanced, and moderate, judgement on anything relating to Celtic or the Ibrox club.

We know who and what Alex Rae is; apart from looking like something that could have had a nice career haunting houses, he is as staunch a specimen of the Peepul as you’re ever likely to see.

Put bluntly, Alex Rae was a thug on the park, a notorious boot-boy who once served a five match UEFA ban for kicking a player in the head.

Now that was as bad as anything you are ever likely to see on a football pitch.

In addition, he has defended Alfredo Morelos on the basis that he, himself, had a terrible disciplinary record for which he had to see a shrink.

By his own admission, he realised that he had to sort himself out when he elbowed David Ginola and picked up a four match ban on the very day that he had returned to his team after a three match ban.

During an interview last year, he described that elbow on Ginola as “accidental” … but press coverage from the time describes as “blatant” and a “moment of madness.”

Regular readers will know that I’m a big music fan and one of my favourite artists is the late Warren Zevon; he wrote a song about players like Alex Rae, although it’s about hockey.

Entitled Hit Somebody, it’s about a “goon” who’s entire career in the league was about viciously stamping out the opposition.

The song makes it clear he had no redeeming skills at the game “(He) wasn’t that good with a puck … Buddy’s real talent was beating people up.”

“Hit somebody! it rang in his ears,” starts one stanza. “Blood on the ice ran down through the years. The king of the goons with a box for a throne, a thousand stitches and broken bones.”

And to me, that’s Alex Rae … that’s the player who defended Ryan Jack and Mad Dog, but who is getting press coverage as if he was a neutral as he launches a verbal attack on our player? Jesus, this is a great example of how our media doesn’t do irony.

Honestly, you get tired of wading through this kind of stuff after a while.

You have bigots lecturing people on sectarianism, discredited officials explaining the rules of the game to dumb fans and now boot-boys clucking their tongues at indiscipline, but only when these things are about casting Celtic or our players in a negative light.

Who are these Peepul trying to kid here?