Celtic Didn’t Even Show Up Today. We Got What We Deserved From That Disgraceful Display. 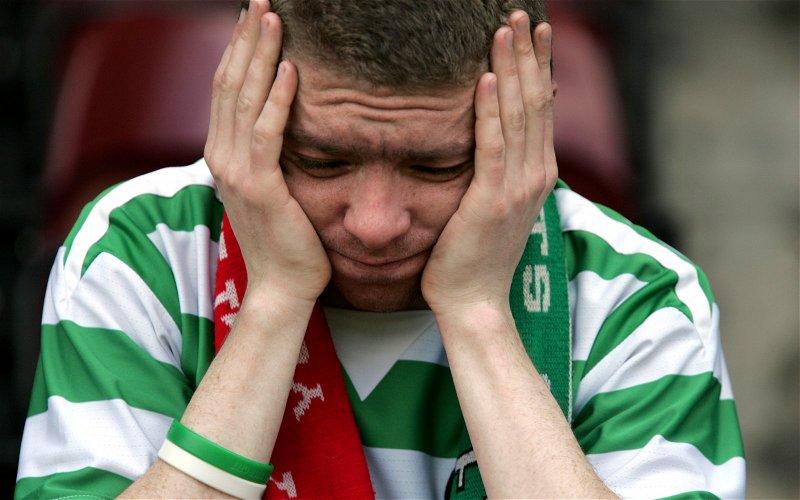 What a disgusting display that was.

Last weekend, we could put down to a bad week at the office.

That was just shocking.

There are no excuses for it.

We simply did not compete.

The team would have been as well staying at home and giving the fans the day off too.

Was there a tactical plan today?

Even at 1-0 down we looked desperate, trying to cross a ball into a packed penalty area time and time again.

How many more times does a Celtic manager have to watch that fail spectacularly before he ditches it as a strategy?

I watched Rodgers team do this time and time again.

If this is what we’re to expect under Lennon then this is not going to be a successful campaign, because how easy is it to figure us out?

Every team in the league is going to set up their games just like this one, and if persist with that system they’ll all have the same result.

By the end of the day we’ll be second in the table; this is just one of the reasons why.

This team has already fallen into a familiar trap; low intensity football at the start of a game leaves us clock-watching as it goes on. Even before they opened the scoring today the stupid, needlessly reckless, tackle from Christie had already confirmed that it was going to be a long afternoon.

Sitting at half-time wondering where the goal was going to come from, the very worst thing that could have happened was losing one early.

So of course we did that.

By the end of that we were reduced to looking exactly like Sevco have in recent weeks; a long ball team.

That is a disgrace for a side with our players on the pitch.

Every time we played the ball on the deck their entire team retreated. Punting the ball high up the park like a glorified pub team was never going to pay the slightest dividends. Even an SPL grade side can defend against that, just as an SPL grade side is capable of packing the penalty box against crosses.

This is the most fundamental, and basic, stuff.

Yet Rodgers and now Lennon have persevered with 1970’s football when it patently does not work for us.

These are the games that lose leagues. Not in October, of course, but there will be plenty of them as the season goes on, games against teams who play counter attacking football and take advantage of our chronic inability to break down a packed defence.

Once teams got wise to Rodgers’ tactical plan – it took one season – we found ourselves in bother in any game where a team pressed us hard and put men behind the ball. Lennon’s insistence on using the exact same formation with a handful of tweaks has already made us look predictable in the SPL.

Two games in a row, teams have simply shut us down and waited for frustration to set in.

When we don’t score early this is what games devolve into.

It’s a joke that we’re going into international week in this position.

We’ve handed the mob across the city the two things that any club needs; morale and momentum.

As I fully expect them to win today and probably by a few we’ve turned a three-point lead into a two-point deficit in the space of seven days.

They will look at us and think we are weak.

Today we looked it.

That was absolutely scandalous.