Celtic’s Plea For Fans To Ditch The Pyro MUST Be Heeded To Prevent A Major Showdown. 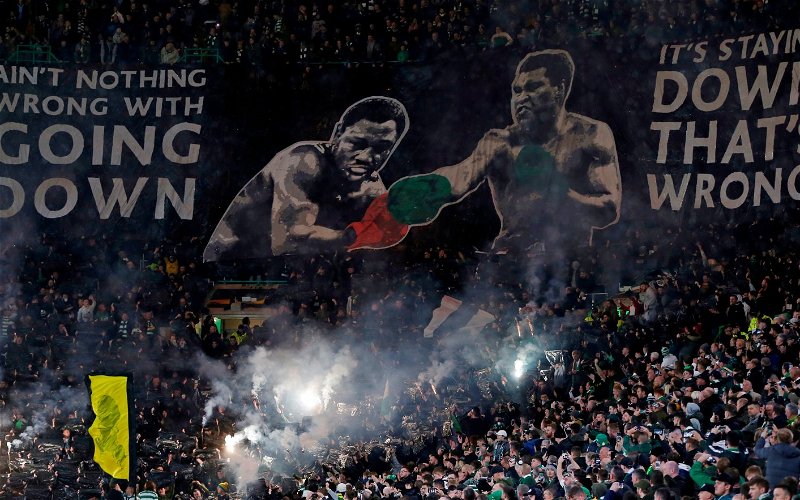 No sooner had I posted my last piece, but someone drew my attention to Celtic’s official statement on the fans who continue to use pyrotechnics in the stadium. And I realised that I’m not going to be able to dodge this issue, as much as I wanted to.

I am not afraid to have this debate.

My views on it are well known enough that I wouldn’t be avoiding it even if I kept my mouth shut. They are on the record; nobody should be bringing this stuff into grounds and the idea that it will ever be “normalised” – something both the Green Brigade and the Unions Bears have said in statements – is deranged.

That is never, ever, ever going to happen and it should not happen.

There is nothing “normal” about letting off a firework or a smoke bomb in a crowded area.

This is illegal, under the 1985 Sporting Events (Control of Alcohol etc.) Act.

Because these things are dangerous.

A recent incident at the Sevco-Livingston game should have offered the proof of this, but I guess if you’re not the one being hurt it’s easy to live in denial.

Why else do people think certain American police forces use pyrotechnics to quell disturbances? Both fireworks and smoke bombs were used in Ferguson, Missouri, in the riots following the fatal shooting of Michael Brown. And not even the military grade ones.

The use of these items has also been banned at music festivals, since 2017, under The Policing And Crime Act 2017 (Possession Of Pyrotechnic Articles At Musical Events) Regulations. One of the MP’s who voted for this was the Tory Nigel Adams who had been trying to get that ban in place since the year before, via a Private Members Bill.

Believe me, as loathe as I am to quote a Tory, this guy knew what he was about.

In his statement to the House he said this;

“Flares can burn at up to 1,600 °C; fireworks can be even hotter, at up to 2,000 °C. There is also the added danger of an unexpected projectile. Smoke bombs are also hot and pose particular risks at indoor venues and also for fellow audience members with asthma or other such breathing difficulties. The surprise throwing of pyrotechnics from within a crowd can also create dangerous and distressing crowd disturbance.”

And he’s right, of course, on all counts.

Celtic has asked fans not to bring pyrotechnics into the ground.

Today it has pleaded with them not to do it.

Those who think our statement today was weak – and a lot of folk certainly do, on both sides of the debate– have grossly misunderstood the mood.

Celtic’s address to the fans today was nothing less than a final appeal for sanity to prevail before a far more serious reaction comes into effect. It’s a movie moment where a guy who’s holding a gun pleads with the person in front of him not to “make (me) use it.”

Our club does not want a confrontation with its own supporters.

No club in its right mind would.

But that doesn’t mean that it will back down from one.

When all else fails, and the reputation and standing of Celtic is at risk, and when ground closures are on the table there is not going to be any option but to enter into that conflict as a last resort.

Anyone who doubts that is a mug.

Anyone who would seek to blame the club for it needs to go and lie down in a dark room until they’ve gotten a grip.

Celtic is not going to wait, either for the inevitable sanction that they can’t ignore, or for the Council’s licensing board to threaten the safety certificate or, God help us, a scenario where somebody does get seriously hurt by one of these things before stomping it out.

I am tired of the argument that the pyromaniacs bring something to the atmosphere in games.

When they bring about a ground closure that’ll be great atmosphere.

I am tired hearing about all the good causes they fight for, as if that gave them license to break the law and put our club in the dock.

The good does not undo the bad nor the bad the good.

The answer is yes.

But the answer is also no, because no club can afford to have an element in its support which constantly brings problems and is not willing to show restraint or listen to reason.

I know there are people in our fan-base who simply aren’t getting this, or just don’t want to hear it … but this can’t continue. This cannot go on. Sooner or later, if the club itself doesn’t get this matter under control then outside agencies are going to do it for us.

I know people don’t believe that, but they ought to take a look around them; our club isn’t exactly popular in its own country. There is more than enough anti-Celtic sentiment out there that they should be convinced some folk would just love the excuse.

When Police Scotland and the licensing board demands that fans turn up two hours before kick-off because everyone is to get searched on the way in, what then?

Yeah, fine, great, let’s add just another hour or two to the day? I think not.

When the alternative is that the standing section gets shut down entirely, what then?

And at that point, it won’t be even Celtic making the call although you better believe that negative elements will be doing their damndest to make sure the club is blamed for it. Even the announcement has a lot of people foaming at the mouth and trying to make it into an equivalence matter; “Oh the club is good at attacking its own fans but …”

Those fans are breaking the law.

Is the club supposed to ignore that?

Because here’s the news; even if the club wanted to, it wouldn’t be allowed to, and that’s the part that a lot of people are going to have to get into their heads here.

On the one hand are those organisations, who have the power to do whatever they like, and on the other a set of supporters who will, at that point, be putting their own status before the whole club.

Celtic will not put itself in that position; long before that becomes a serious prospect, Celtic will take on the people responsible for this and act accordingly. And that will cause division, at a time when we don’t need it. It may even cleave off a section of our fan-base which sees the Green Brigade as the only true expression of the “culture”, and that is every bit as fanatical as those on the other side of the city who think Sevco should be an expression of theirs.

The trouble is, of course, that their club is bricking it over the behaviour of that section, because it’s already bent its whole identity to suit them. Celtic will never bend its identity to suit one group of fans. Those fans are allowed their politics … they cannot force it on the rest of us.

Whatever the club chooses to do in response to this, they have my full support.

What other option is there?

To allow lawlessness in the stands?

To invite the kind of problems which can do us real harm?

This one is a no-brainer. This one shouldn’t even require cogent thought.

When the club is being harmed, and they ask fans to stop doing the harm why isn’t that automatic? Why did we ever get here in the first place?

But we are here, and the only question remaining is where we go next.

That’s what people are going to have to ask themselves, but as they do they should not be under any illusions that Celtic’s resort to pleading represents the ultimate weakness.

It’s the last time the club is going to ask nicely, and as the statement says that Celtic will be taking “further measures” you might well conclude that perhaps the talking’s already over.