If Celtic Had Lost Seven Goals At Home In Europe, Savage And Co Would Be Laughing. 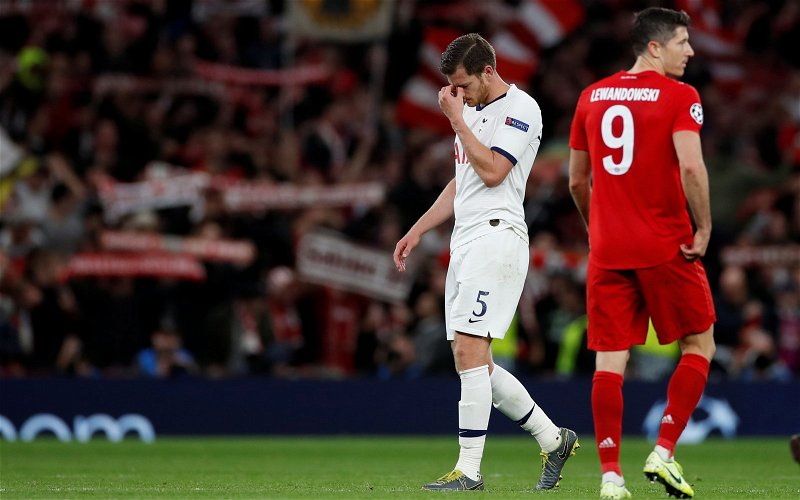 Well, wasn’t that something last night?

After getting two teams to the Champions League final last season this was predicted to be another big year for English clubs on the continental stage. Yet it hasn’t exactly started out that way. City look good and are probably secure. The others are already in peril.

The most damaged, so far, are Spurs of course. Their Champions League campaign had already begun on a poor note with a 2-2 draw against Olympiakos. Since then, they’ve also gone out of the League Cup, on penalties, to lowly Colchester.

But it was last night’s staggering, scorching defeat at home to Bayern Munich which has held up a mirror to the English game which it might not enjoy seeing. The result was astonishing, and all the more so because it was not out of place with the performance.

The English media might believe that the result wasn’t an accurate reflection on the game … but it broadly was.

The argument that the scale of the defeat was bigger than it ought to have been is, to be frank, one you can take with a pinch of salt.

Bayern were magnificent, and when the top class players in that very expensive Spurs side capitulated so spectacularly they were always going to be punished to the absolute maximum.

Bayern made them pay alright.

The English media reaction has been one of profound shell-shock.

This wasn’t supposed to happen to them.

This wasn’t meant to be able to happen.

They have the best league in the world, after all, and can pay more for players than just about any other nation.

It wounds their sense of pride to see a top side from their manor so easily, and completely, swept aside.

We are an SPL club with a fraction of their resources, but the last time we lost seven in Europe the mockery was loud enough to hear in Glasgow from London. Idiots like Savage were gleeful. If we had lost seven at home, we would never have heard the end of it.

Remember all the stuff we had to read when we lost to PSG and Barca?

About how those results were an embarrassment to Scottish football … as if we had vast resources and billions in TV money?

Some of the worst stick we took was in relation to the Zenit result in February last year, as if they weren’t managed by Roberto Mancini and hadn’t spent a fortune.

We suffered the same criticism for losing to Valencia … as if they were a European minnow.

Except that it sometimes does.

It is rather pleasing not to have had this happen to us, but it is especially pleasing it to watch it happen to a club south of the border. For all their pomp and arrogance, when the top European teams are focussed and on fire they leave this lot behind.

Can you even imagine the stick we’d be taking if this was us?

Doesn’t bear thinking about, does it?