It Is High Time Sevco Fans Put Aside Their Evil Obsession With Child Abuse. 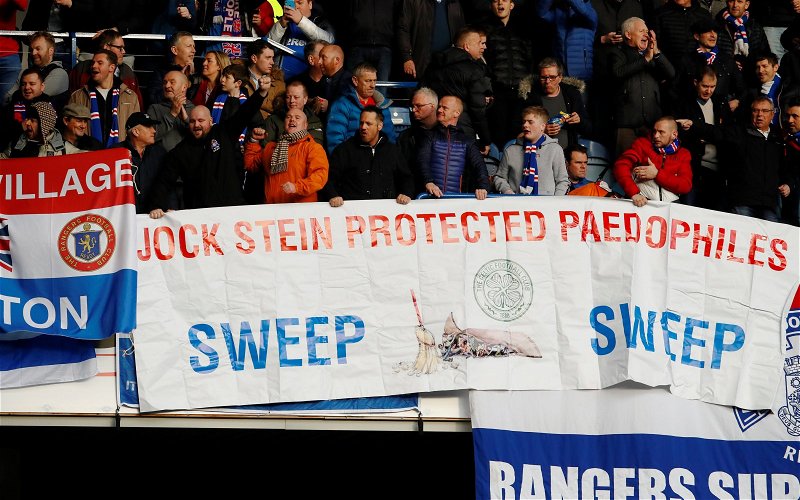 Tonight the BBC has dropped a bomb onto the Sevco fans who have spent the last few years focussing, in ever more despicable fashion, on the Celtic Boys Club scandal.

I make no bones about it calling it that either; a scandal is exactly what it is and it’s only right that people have gone to prison for it, and if more sentences are handed down I will not lose sleep.

I’m not going to talk about the revelations which are on the BBC website tonight.

They are there for any and all who want to find them.

This whole subject makes me want to go for a long shower, and I’m not about to get into specifics here.

This isn’t a point scoring exercise. I have no wish to attempt that.

But there are a lot of people in Scottish football who have forever tried to paint this as a problem affecting one club. That has never been remotely accurate.

This problem is widespread, not just in football but wider society.

Whilst she was Home Secretary, Theresa May herself said that it was “woven into the fabric of Britain.”

It is a horrifying thought.

It’s a horrifying subject, one that doesn’t belong on a football blog or in any discussion about the sport. This is something that happened to and within football but which has nothing to do with the game. Some idiots have suggested that there should be sporting sanctions for it; I mean, really?

Are they so desperate for a sniff of success that they have to slither through this particular muck for it? Some of them are, but it must taste like dirt in their mouths.

It is time that this abhorrent campaign of theirs was set aside.

Their obsession with it is appalling, and brings no credit to them or to their club and especially when their former club had its own issues to deal with. Celtic has paid compensation for something that happened in its own house, as a result of the actions of a club employee; we know what Sevco said when abuse victims contacted them over what happened in theirs. “Speak to the liquidators.”

The Survival Lie has never been used in such an obscene fashion.

There are no clean hands here, just victims and a whole bunch of lessons to be learned and the hope that we do learn them and that this kind of thing can never happen again. Nobody is above the fray and they never were. It’s something all clubs have to face up to, and all clubs have to take steps to prevent in the future.

The point scoring over it has been loathsome.

To keep it going now makes them look worse than hypocritical.

Their behaviour is disgusting.

Tonight’s news should be the moment they confront their own scandalous lack of compassion and their shameful wallowing in hate.

How much do they really care?

Enough, perhaps, to shut up and let the authorities do their job. To let the investigations proceed, and to let them go where they will. This is not a conspiracy against their club although many of them are screaming that at the press tonight. Shame on them.

It’s not funny anymore, is it?

The seriousness of this is finally starting to hit home.