Last Night, The Scottish Media Was Snapped Out Of An Unbearable Sevco Love-In 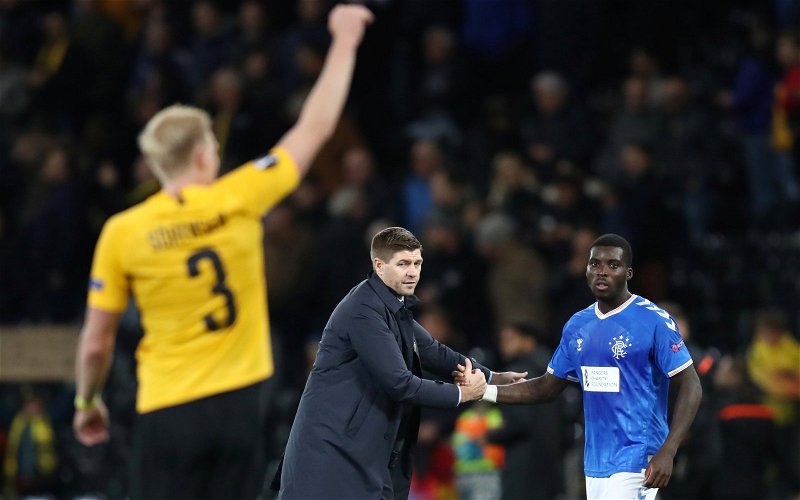 If you’ve watched BT Sport’s coverage of the Young Boys vs Sevco game then you’ll know it is almost unbearable.

A love-in from start to almost finish … and if the finish hadn’t been so sweet them it really would have been beyond the limits of endurance.

BBC Sport Scotland was worse. With around sixty seconds of the game gone one Ibrox player was already being described as “immense.”

Morelos is a £20 million player again because he scored one and hit another shot at the keeper. He didn’t do much more than that for the entirety of the game, except snarled and threw himself on the ground whenever a Swiss player was near him.

The praise the Ibrox club got for not doing very much was pretty ridiculous. I watched their game. I wasn’t impressed in the least. Young Boys deserved their win. They were a team who I said from the second the draw was made were capable of doing damage.

The media’s gross underestimation of them, and that of the Ibrox support, was quite amusing.

But the commentary, in the main, was awful and especially on BT where McCoist doesn’t even pretend to know what he’s talking about.

Every 50/50 decision, he called it in favour of Sevco, no matter how ridiculous.

He praised every player, no matter how annonymous or poor.

BBC Radio Scotland did what it always does; as a broadcaster still banned from Ibrox they try hard to crawl into the good books every chance they get.

I thought the Ibrox club scored against the run of play.

I thought Young Boys deserved at least a point. I chuckle over the perceived injustices visited upon Sevco in that match; this lot are never simply beaten by a better team, there’s always some mitigating factor, like a lack of VAR or something else. Gerrard never accepts any personal responsibility.

But to listen to the commentators you would think this lot were world beaters who rolled onto foreign soil and dominated from start to finish. That wasn’t remotely the case.

Remember how the media used to highlight our bad performances away from home?

Here’s one they won’t highlight. Gerrard has now played 4 group matches away as Ibrox boss and has not one a single one of them yet. The BBC – who were heaping praise on the Ibrox club during the game, only for it all to go spectacularly wrong late in the day – actually published a damning statistic, but one that I can’t see has any validity; Ibrox clubs have now failed to win in their last 13 away group matches in Europe. Since only one of those clubs is the current one, big deal.

But it does bring Gerrard’s record into sharp focus again.

He beat Osijek last season away from home and that was it, out of seven away games.

He’s been slightly better in this campaign, winning away in Denmark and in Gibraltar … but the Lithuanians of Progres held them to a draw, Legia did likewise and now they’ve lost in Berne. The away record is pretty stinking overall.

But the love-in goes in. Gerrard is labelled some kind of guru. The team is spoken of in ebullient ways as if they are on the brink of greatness. Their next two European games are against Porto, who I expect will do further damage to this fantasy.

But last night, for the hacks, the garden was in full bloom for a while.

Then in the last seconds of a game the press overwhelmingly thought their favourite team had deserved to win, they were hit with the sucker punch. A moment of silence fell. Not one for sober reflection or a pause to consider what might be coming next … no. Disbelief.

The shock of someone bursting their wee bubble.

If they weren’t so happy to live in it, then these moments wouldn’t hurt so much.

And we’d lose the satisfaction of enjoying them.