More Sevconuts As The Crazies Try To Compare Morelos And Christie’s Discipline Records. 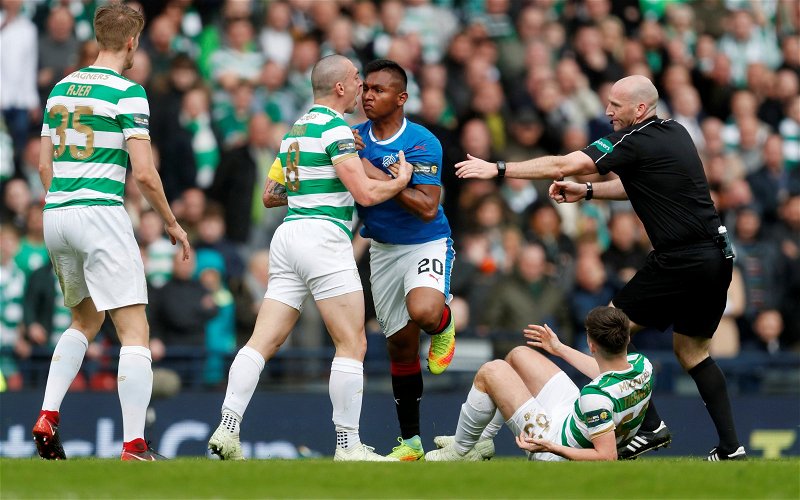 Last night, the internet was awash with Ryan Christie stuff.

Michaela has written an excellent piece on the stick he got, which I published earlier, so we don’t need to go into that.

There’s nothing I could write which will better what she already has.

The tackle did something to the Peepul. They are usually a moon howling bunch, as we’re all well aware, but last night’s outpourings were in another order of madness entirely, even from what we’ve experienced before. The subject was Christie’s overall discipline.

And they were asking this question; isn’t it as bad as Morelos’?

They actually want to have a serious debate about this, a debate which is as convincing as Graham Spiers article of the weekend, where he says that Morelos reminds him of Gerd Muller – yes the one who played for Germany, the one who won three European Cups and a World Cup. A golden shoe winner. A golden boot winner and all the rest of it.

Honestly, does guff like that inspire anything other than contempt?

Spiers used to be a real journalist; I don’t know what he is now writing rubbish like that.

Spiers isn’t the point here, of course, but his article is indicative of the kind of nonsense we face having to read for the next fortnight, as I predicted yesterday. Febrile minds are going to conjure up all manner of nonsense for us to snigger at … although whether you think it’s a laughing matter will depend to an extent on how mental it gets.

It might not come more mental than this disciplinary debate though.

Ryan Christie’s red card is the fourth of his career.

This had led some of the lunatic fringe to suggest that he and Morelos have comparable records.

The suggestion that this tackle – and his prior record – makes Christie a dirty player is risible.

Christie’s red cards – not including this one – have all come as second bookable offences.

They are years apart.

Christie has never been prone to losing the rag.

As a young player he’s occasionally been careless, not thuggish.

When everyone, even in the media, accepts that the tackle yesterday was “out of character for him” why is this discussion even being had?

Because Peepul still feel the need to demonstrate how mental they really are.

Morelos has actually been shown five red cards at Ibrox, and four of them were instant dismissals.

There could have been many, many more.

In the most recent game against us, he escaped after blatantly stamping on Christopher Jullien … so much for the “improvement” in his temperament.

On top of that, in two and a little bit years at Ibrox he has amassed over 40 yellow cards … quite an extraordinary stat.

Christie has been playing in Scotland since the 2012-13 season.

He has just seventeen yellows.

The two are not even remotely comparable.

I understand that there is an inbuilt need in the Ibrox lunatic fringe to rattle on the bars of the cage every once and a while, but we normal people shouldn’t have to respond to this kind of raving. Nevertheless, I feel compelled at times to hold their claims up to the ridicule they deserve.

This was one of those times.