No Wonder We Have A Sectarianism Problem In This Country When The BBC Legitimises Bigots. 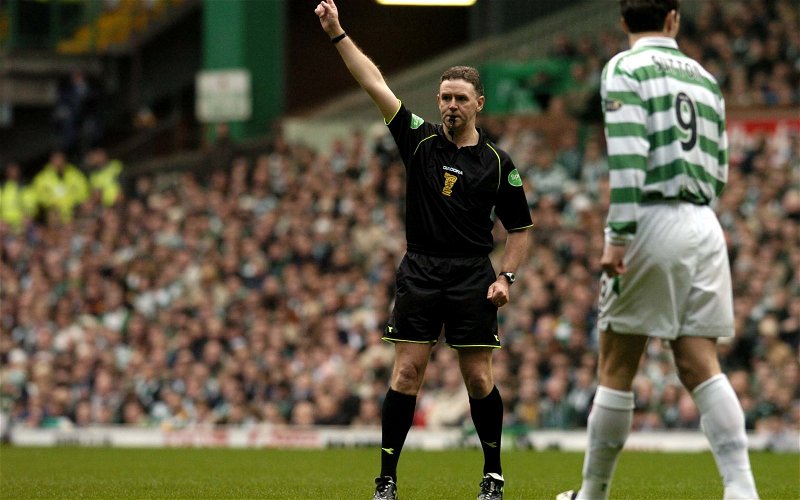 Scottish football has a bigotry problem and that hardly qualifies as news, but one of the reasons that this problem persists is that we have, in this game and on the periphery of it, people who have, and continue to, legitimise bigots.

Over the weekend, BBC Sport Scotland brought Hugh Dallas out of mothballs and got to him to talk about the weekend’s games.

Some have raised a hue and cry over his failure – or refusal – to discuss the penalty kicks we should have had against Hibs.

My concern, and my anger, is that Hugh Dallas was ever put up for that duty in the first place.

The BBC should not be giving this man the time of day, far less a platform to extoll his alleged “expertise” … he was dimissed from the role where he gained in.

Hugh Dallas is a sectarian bigot.

There it is, in black and white, the words the Scottish media seems reluctant to print.

He was fired for it, for the sending of a sectarian email on his SFA computer, through the SFA computer system.

It should be been a career ender, but the SFA got him a cushy job at UEFA on the back of it and the Scottish press fetes him to this day.

Four other members of staff at Hampden were sacked in relation to that email, including an audio-visual technician.

Would the BBC have given him a job?

Possibly, because he and two others later won their jobs back on appeal after their union reps handed the SFA panel an explosive dossier of evidence that suggested that sectarian emails were commonplace within the governing body, and that high ranking officials had gone unpunished for sending similar stuff.

Of course, no-one in the media ever followed up on that.

It is all the more damning to consider that Dallas, himself, lost his appeal.

Dallas should be no worthier of a place in our press than someone who joked about black people or Jews or Muslims ought to have been.

Had he sent a sectarian email in relation to any one of those other groups, he would never have worked in the UK again.

Once more it seems that joking about Catholics is seen as a lesser offence, and perhaps even acceptable.

It infuriates me that this individual was given a platform, when there’s not a person in this country who is not fully aware of his history and the reason he was dismissed from his job as head of referees at the SFA.

The BBC put him on the air anyway, and they’re not the first media organisation that has given him legitimacy over the years.

Earlier this month, The Sun published an interview with Ian Durrant in which he was allowed to take a shot at supporters of both Aberdeen and Celtic for their “vile treatment” of him over the years … it was funny that the same paper omitted his own scandal of last year, when he was videod at a fan event making sectarian remarks.

The media’s rank hypocricy on this issue is notorious … but we should all have special contempt when the BBC indulges in it.

In allowing Dallas to pretend that he’s a pillar of our game the national broadcaster has lent credibility to a man who has exactly none, and in doing so they have damaged their own.

These are the self-same people who pontificate from on high whenever fans misbehave.

They have lost the right.

They are no better than the club at Ibrox which thinks sectarian singing is wrong only because it might get them into trouble.

This is 2019, but anti-Catholic sentiment continues to flourish in Scotland.

When our national broadcaster puts a bigot on the air and holds him up as a paragon of virtue you can wholly understand why and how it does.