Our Media’s Embrace Of A Dictators Grand-Daughter Is A Disgraceful Way To Attack Celtic. 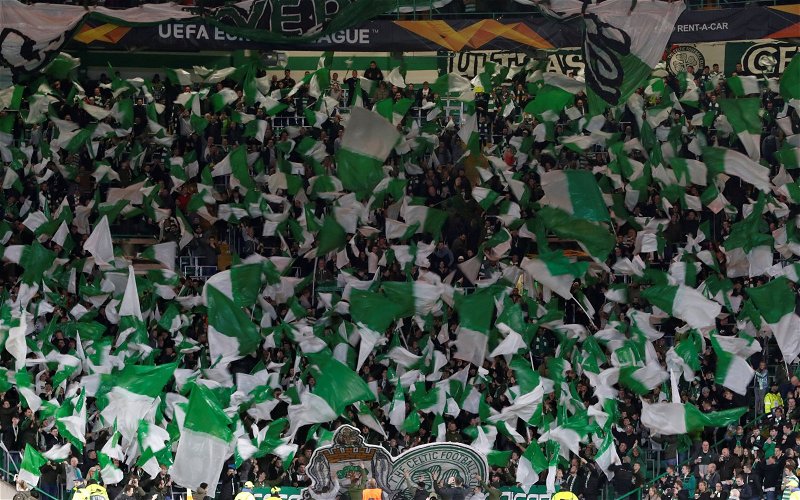 Our media keeps some sordid company, it really does.

Last year I attacked them over their allowing Tommy Robinson space to attack Celtic and our supporters. Today is a shining example of their shamelessness and how their eagerness to find an anti-Celtic story has seen them crawl into bed with some true scum of the earth.

Today we’re being lectured on good conduct by the grand-daughter of a dictator, a woman with her own baggage in that area, a member of a far-right party in Italy and who has a history of transphobia, immigrant bashing and casual racism.

And she’s delivering this lecture – and calling for Celtic fans to be prosecuted for a hate-crime – in two of our national titles.

No surprises for guessing which ones; it is, of course The Record and The Scotsman.

This is about the Celtic fans banner the other which depicted the hanging Mussolini with the slogan “Follow Your Leader.”

It is a message not only to Lazio fans but to every far-right ideologue out there.

For just a second pause and reflect on being accused of hate-speech by a bigot.

You wonder if you’ve stepped off the planet don’t you?

In what world is this something that we should take seriously?

In what world is she credible?

I understand that some blood relations will always feel the need to defend their forebears no matter what, but she shares so many of Il Duce’s political and social views that there’s little doubt he’d have been very proud. And that’s not something to boast about.

Why is The Record giving her the time of day?

Why is it giving space to someone who, upon once being accused of being a fascist, replied to her accuser “Better fascist than faggot”?

This is not an innocent complaining about the mistreatment handed out to a relation … this is a fellow traveller on the road he took to infamy.

She wants the posthumous trashing of Mussolini to be a crime in Italy; what a joke that is.

Fascism itself was the crime, against Italy, against Europe and against humanity. If partisans had not shot him dead and then strung up his corpse he’d have lived just long enough to stand trial in Nuremberg where the rope would have awaited him anyway.

It can’t be easy for anyone knowing Gramps was a murderous old bastard who died a violent day which history records he richly deserved, as some small measure of justice for the totality of his crimes, but that remains a fact whether she likes it or not.

The Scottish press hasn’t even bothered to vet her here, to find out what her own views are.

They just recognise an anti-Celtic tale when they hear one and they’ve taken great pleasure in giving her comments a platform, much as they did when it was Robinson accusing us of all sorts a few years back, as if he’s a paragon of virtue and not another scumbag.

I understand our press and its eagerness to stick a boot into us every chance they get. I know they have to pander to the target audience. I also know, as I pointed out last night, that some of that target audience is fascistic and repellent. This was clearly a special wee one for them.

When we accuse Sevco of pandering to the bigot pound, we forget at times that they are not unique in this country in doing so. Their media enablers have been doing it just as long. This is low even for them though. This one is outrageous.

All I can say to it this; if the gutter rats of the right are attacking you then you must be doing something right.

The Daily Record and The Scotsman clearly don’t mind being seen on the other side of the debate.

Shame on them for that.