Sevco’s Statement To Their Fans Sums Up Their Appalling Attitude To Sectarianism.

Last night I said that I’d do a piece on Sevco’s statement to the fans in advance of their match in Portugal tonight.

That statement summed up everything that is wrong with that club.

You honestly could not get a clearer example of their twisted mind-set.

For openers, what kind of club uses a statement begging its own fans to behave as a stick with which to take a shot at another side’s supporters? This one did, and not for the first time I read one of their press releases with incredulity.

“Let others fall foul of the authorities – we have seen what happened in Bulgaria just more than a week ago,” it reads, “and there is now an investigation into a racist slur against one of our own – while we concentrate on supporting Steven Gerrard and his players in the correct way.”

Unbelievable. It is not hard to read into this a stab at Celtic over our UEFA fines, as well as a backhand dig at the SFA. Even if it isn’t – and it definitely is, as I’m sure you all agree – what’s the need for including a line like that in an official communique?

Do they really have to appease the lunatic fringe with something like this even as they tell them off?

One my strongest criticisms of their pitiful stance on sectarian issues is how they refuse simply to say that these songs are just plain wrong. They refuse to do that here.

According to the statement it’s “songs, or behaviour, which UEFA could deem unacceptable”.

There is a complete blindness to recognise that some of these songs actually are unacceptable and shouldn’t be sung whether UEFA sanctions them or not.

And in case you think I’m reading too much into that statement, the club helpfully makes their position on this even clearer in the closing paragraph, in a way impossible to misinterpret.

“Be loud and be heard … but keep in mind that UEFA’s view of racism is wide ranging, which means singing or behaviour that could bring much more serious repercussions for the Club must be avoided,” it reads. And that’s it right there, in plain English.

It makes it clear that the club itself does not believe that singing about being up to your knees in the blood of another nationality or ethnic group is itself inherently racist, and this is just UEFA’s interpretation of it. That is a disgraceful suggestion to make in an official club release.

“Let’s set higher standards and continue to demonstrate that (the club) is for Everyone, Anyone,” the statement ends.

But that club is not for everyone or anyone and it never has been.

Their board’s refusal to distance itself definitively from the bigots in its support reveals that campaign, and all the slogans that go with it, to be empty rhetoric.

Remember to vote on our latest poll …

Will Sevco's Notorious Supporters Behave Themselves Tonight In Portugal? 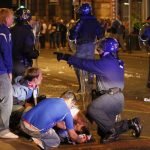 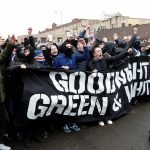 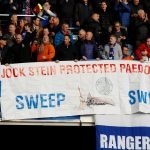