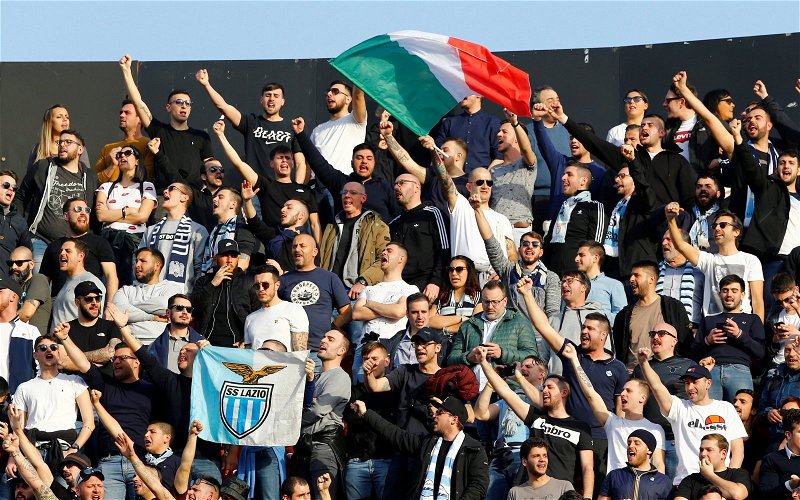 Wasn’t that something from the Scottish press today?

Wasn’t that nice of them, to publish the moaning and greeting from the Lazio racists of the Irriducibili?

To let them rant about a punishment that “benefits Celtic”?

There’s nothing like going to bat for the home team, is there?

Except that this is supposed to be our media here, not theirs.

The Lazio fans got exactly what they deserved here, and that’s the truth of it.

The media may want to give them a platform to grandstand against the unfairness of all it, but the decision was perfectly right and fully justified. Lazio fans are a disgrace, amongst the right wing and racist in Europe.

They have booed their own black players.

They have honoured war criminals.

And this sentence was for giving the fascist salute, which is widely despised everywhere.

That’s what this particular disciplinary case was about.

What a pity the Lazio fans couldn’t just have called it a Red Hand Salute, honouring the murder of Catholics instead of the persecution of Jews. They’d have got even more sympathy from our hacks. Perhaps that’s why the Scottish media finds their cause so worthwhile.

They were happy to push that excuse back when it was a club from Ibrox making it.

“Against Celtic, they will have 10,000 fans in our stadium. Our players need the contribution of the Curva Nord. So UEFA have given Celtic a massive advantage,” a Lazio fan rep raved and ranted.

If they had behaved themselves there wouldn’t have been a partial stadium closure in the first place. This talk about the “advantage” to Celtic is rank nonsense as well; Lazio never fill their ground for these games and so there will be plenty of seats in the sections that are open if these folk want to attend the match.

All of this is pitiful, and the Scottish media giving these claims publicity as though they were legitimate is an absolute embarrassment.

Do we support racism in this country?

Do we always give bigots at platform to complain when they are called on their bigotry?

Or is it just when they are going up against Celtic?