Hail Hail To The Celtic Fans Who Braved The Elements For The Annual Sleep Out. 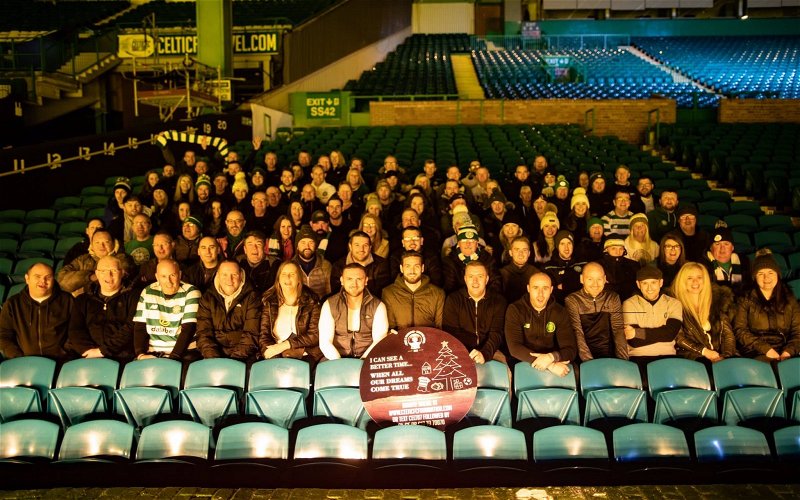 As many of us slept on Saturday night, in the comfort of our own beds, with the heating on, in a safe and warm room, a group of Celtic went to sleep in the cold, as the temperature plummeted.

Each had only a sleeping bag and whatever clothes they had on to brave the elements within the stands of Paradise.

This was all in aid of Celtics Big Sleep Out, to raise funds and awareness for those sleeping rough around Scotland, and there are a lot of them, more than many of us care to think about.

For those who braved the elements on Saturday, they made the choice to spend the night outdoors, and doubtless all would have felt gratitude that each had a warm bed to go home to where they will feel safe and secure, unlike so many around Scotland who sleep rough every year. Those who have to do this night after night often don’t have any choice.

Seeing the homeless out there in the city is a sight that can break your heart.

So many people sleep rough around Glasgow, and their plight is never more apparent than when it gets to the winter months. We can feel so helpless. Although we can some change or some food, that feeling can’t wholly be escaped when you consider what they go through.

For me, it’s a horrible state of affairs. Many have fallen into this pattern and can see no way back. But this is where charities like The Celtic Foundation step up and take the lessons of Brother Walfrid and the whole reason Celtic was formed, to feed and help those in need

It is one of the main reasons I am so proud to be a Celtic fan.

Just to know what the club stand for, just to see it shown through the fan-base … just take a look at the constantly berated Green Brigade, and their food bank collections, the sheer amount of money they have raised for charities … and to think the hacks look down on these guys, guys who have done more good than the average Scottish journalist ever will.

It’s a way of life for most Celtic fans and one that I feel so in tune with morally.

I am so proud of the fans who turned up on Saturday to do the sleep out, and astonished at the money they have raised – £40,000 according to the official site. It is absolutely fantastic and shows the great support these fans have for the cause.

The fans were given support during the night with the likes of Chris Sutton, Jackie McNamara and Simon Donnelly turning up and getting pics and chatting away, which for some of the fans would have been the first time meeting some of their heroes.

But this time they were the heroes, and the former players let them know it.

It was also great to see the likes of 20 Minute Tims and 90 Minute Cynic podcasts and Celtic Fans TV having people take part in the sleep out along with 2 of the Celtic directors with Sharon Brown and Michael McDonald … perhaps the biggest name at the sleep out this year was Irish Mick! Some were quite star struck it seemed, but most were able to settle down to try and get some sleep through the bitter cold and loud snoring that came later.

For the money raised and the frozen nipples lost, the thing that will stick with all those fans who braved the elements, was all those folk who sleep out every night and who can’t go home.

I spoke to a few of those out there on Saturday through the night on chat apps, and that was the same thought they all had; as cold as it is, as uncomfortable as it was, they get to go home, yet those they are raising money for don’t have that luxury.

That will stay with them and they will tell of their night under the stars at Paradise but they will also have some form of understanding, even if for one night, what it’s like to sleep outside in the winter months. Maybe even more than the money raised, that will do some good.

Here are the links for some of the guys who have done the sleep out, and where you can still donate to their Just Giving pages. Alternatively, if you would like to donate direct to the Celtic Foundation Just Giving page feel free to do it here

Lastly I just want to say a big thanks to all those who took part, both for the money raised and the experience gained.

I do hope, though, that at some time in the future these type of events are not needed.

Ross McAtasney is a Celtic fan and blogger from Glasgow.