The Ibrox Fans Response To The YouTube Guy Tells Its Own Story. They Are Quite Mad. 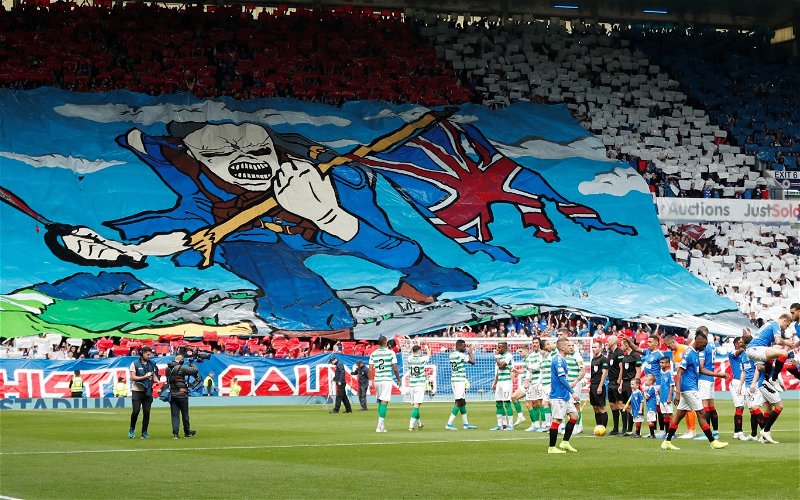 They say that the truth hurts, and they are right. Sevco doesn’t like truth. Its fans don’t do truth. It is an alien concept over there.

Back in 2011, when their fans were in denial about what Celtic fans were uncovering and writing about Whyte, back when they still had time to accept the truth and mentally prepare themselves for what was to come some months hence, if not actually do something to prevent it, the BBC unveiled their documentary on Whyte, which clearly established that the man running their club was Very Bad News.

He was not the sort of man one would have wanted in charge of any football team in the land. In that piece, a brilliant investigative work from Mark Daly and his team, Whyte’s entire MO was laid out; it would prove to be identical to the plan he set in motion just a few months hence.

It should have woken up their entire support.

I always understood that they didn’t want to hear it from us.

When a rival is trying to tell you something – and especially when they tell you it’s for your own good – it is natural that there is resistance to that.

It is natural for you to turn your head away and not listen. But this was the national broadcaster. This was the BBC.

There was no agenda. They had a right to know that information and the BBC had a public service duty to tell them. Think about it like this; in any other field of endeavour this was the most reputable news organisation in the country – stop laughing, I’m being serious – telling the directors, the shareholders and the customers of a company that it was being run by a crook … how is that usually dealt with? Certainly not the way the Ibrox fans reacted.

To say they went mental is an understatement. They demanded that their club sue the BBC. They protested the place. They brought banners to the games slagging off the people who had tried to give them fair warning of what the man who controlled their club was up to.

This hysterical reaction stunned those who had worked on the story. The BBC and Rangers went to war over that and Sevco remains at war with them to this day, over a number of matters so minor it’s incredible anyone got in a flap over them. One involved a cartoon – a cartoon, a joke – of Ally McCoist falling out of a window. Sevco fans didn’t appreciate it.

It’s been a long time since they had a sense of humour about themselves.

As most, if not all of you, will be aware, there was an incident recently involving a YouTuber who went to visit Celtic Park and Ibrox, whilst wearing the rivals’ colours. Like the BBC he had no agenda. He wanted to do the tours and he wanted to understand the rivalry better. He had heard a lot of lewd stories about the hate that surrounds it, but if he was intimidated by it or even convinced by it, he would never have done what he did.

He presented everything he saw. He presented facts. As he was to say in a follow up video, had there been unsavoury incidents at Celtic Park he would have reported them. He would have shown them on the video. There were none. There weren’t really any at Ibrox either, but he was cold-shouldered (if you can use that expression on someone who’s name isn’t Dave King.) But aside from a few yahoos in vans and cars he was not treated to any overt hostility.

In the end, he preferred the Celtic tour. He preferred Celtic Park. He enjoyed the banter with our fans and he really liked his tour guide. When the guy talked about how wearing the jersey conveys a huge responsibility on the supporters to behave like ambassadors for the club he was speaking for all of us, and it’s the reason we have a great reputation across Europe.

They were sentiments every Celtic fan would recognise, and he knew that the rep was speaking from the heart and based on what he saw in the room he knew the fans were on board with it. Not paying lip service to it, but fully in agreement.

As the lawyers would say, these are the facts and they are undisputed.

Before he had even posted the video, he was getting hate mail from across the city. Once he had posted it the level of hate rose exponentially. Conspiracy theories abounded; he was “in league with Celtic.” He had “agreed his visit to Parkhead beforehand”; quite a bizarre thing for him to have done at one club and not the other.

The suggestion that he was a puppet of a Glasgow based PR firm who Celtic hired recently was thrown into the mix.

That was useful one for them, because it allowed them to tie this guy’s visit into their primary sick obsession, the boy’s club abuse cases. So what had started out as a guy doing a stadium tour was suddenly a “distraction” from … God knows what.

Let me tell you something, just from a political perspective; if I’d hired a PR company to distract people from an impending or ongoing scandal and this is what they came up with, I’d fire the lot of them and bring in folk who actually knew what they were doing.

It is incredible to me at times – I find it pathetic – what these Peepul believe and what goes on in their heads.

All week long, their social media sites have been buzzing with this story.

Theories, hatred, bile, the crassest ignorance imaginable … and all for what?

Let’s bear in mind here that this guy didn’t call them bad names, he didn’t call out their club, he said very nice things about their stadium, their “history” and their staff.

He just thought the experience at Parkhead was better.

That’s his offence. That’s the reason for their grotesque, paranoid, spitting, hateful, OTT response. The guy preferred the Celtic Park tour and made a video about why.

Can you imagine the depths of self-loathing and despair about your club you have to be plumbing to even care that someone thinks your rivals have a better stadium tour?

The guy himself said, on the second video, that the whole nature of the project was not to make people look at him, but to make them look at the clubs he features.

And his verdict, in that second video, on the Sevco support was damning.

Remember, these people are alleging that this guy was in league with Celtic somehow; all they had to do to defeat that nefarious scheme was nothing at all. Not respond, or at least to respond with humour or even just a modicum of self-awareness.

Instead they confirmed everything we, and the world, knows about them. If this was a conspiracy, they are the ones who assured that it was a successful one. Their reaction made it into a bigger story than it would have been. They sealed the deal.

So what started out as a video about a guy touring the stadiums of both clubs has turned, instead, into one about the lunatic nature of the Sevco supporters. They did this to themselves. There is nobody better than them than turning a drama into a crisis and this didn’t even start out as a drama. But as the guy himself said, if you were watching this from the outside and you were going to choose a club to support, which one would it be?

But hey, no-one likes them and they don’t care.

Jesus, they sure do moan about it an awful lot though, don’t they?