Lennon Stands Up For The Players Who He Says Are Not Getting Enough Credit.

Neil Lennon took a slap at the media today, and they richly deserved it. It wasn’t a hard slap. It wasn’t our manager losing his temper or anything else. It was a pointed dig, and it was deserved. This website has been saying something similar for a while now.

Lennon’s point was that the media hasn’t given us half the credit we deserve.

He was standing up for the accomplishments of the players. 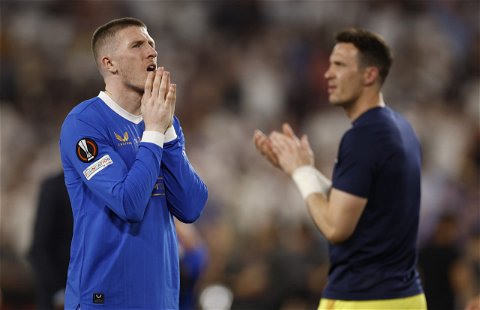 Sevco Try To Raise Cash For The Mooch By Flogging The Last Of The Family Silver.

This was not a preening Rodgers, discussing his own record and putting it out there.

Lennon wanted the hacks focussed on what this team has done, and how high its standards are.

There have never been higher ones.

This has constantly needled the readers of this site, and I’m certain that if we’re all pissed off about it then the players and the management team definitely are. This is the most successful club side in the history of this island; I cannot say that enough times.

People will talk about the Lisbon Lions and how they brought back a European Cup, and they are correct that those players and that team will forever be the gold standard of Celtic accomplishment until another of our teams does the same or better … in other words, when Hell freezes over and flowers grow on the moon.

That team will never be topped.

But in terms of purely domestic success, I don’t think there has ever been a team in the Scottish game who can stand beside this one.

An unbeaten campaign? Three trebles in a row? Ten domestic trophies on the bounce? That’s beyond brilliant, and it has been married to the home record I talked about yesterday; a mere four defeats at home in five seasons … that’s incredible.

If we secure the ninth title in a row, we’ll have equalled the best record. If we make it ten, we’ll have beaten it. I can’t see how we’re going to be stopped, as I’ve said many times on here. One of the reasons I have such faith is that this team is nothing like the Ibrox club which won the ninth title and couldn’t get over the line to make it ten; Lennon pointed out another salient detail today that the press wants to ignore; the average age of our squad.

“We’re, what, 10 wins in a row? That’s very, very good. I know people look for weaknesses and people look for negatives and as a manager you’re always on guard for that sort of thing, but the way they’re playing at the minute and their mind-set, at this stage of the season with a heavy December, they’re giving me everything … I think the team can get better, I think there’s more to come from them,” he said. “They’re still young, a lot of them. Your (Kris) Ajer’s, your (Jeremie) Frimpong’s, your Mikey Johnston’s. They’re all teens or early 20s. Allied to that we’ve got some really talented players on top of that who are consistently underrated by some.”

I think the whole squad is “underrated by some.”

These footballers are playing at the absolute peak of their powers.

The trouble is, to focus on the fact that this is the most successful domestic club side in the history of the game here is to cast a dark shadow over the club that the media lauds copiously and fawns over. The side that cannot seem to catch us.

There are two games to go before we head into January, of course, and the break.

If we win both of them we’re eight points clear in the league.

We’ll be on the brink of another title and possibly even another treble.

That we’re seriously entertaining these prospects – nine in a row, four trebles on the bounce, heading for the Season Of Ten – is a credit to these footballers who have done this now under three different managers and in circumstances that would have crushed other clubs. The departure of Rodgers was the point everyone thought it would all fall apart … in fact, our form across all competitions improved after Lennon took over and the trophies continue to be won.

Neil Lennon was right today to put the credit for that where it belongs; with the players who have made it all happen. They might not get the credit that they deserve from the media, but their manager knows what they’ve done and so do we.

The history books will too.

They will record this side as not one of the greatest club teams in the history of the Scottish game, but the very best.

Their domestic record will not simply stand up to future scrutiny but will tower over all who’ve come before and after.

LAST CHANCE TO DO OUR SLAPPING SEVCO QUIZ BELOW …