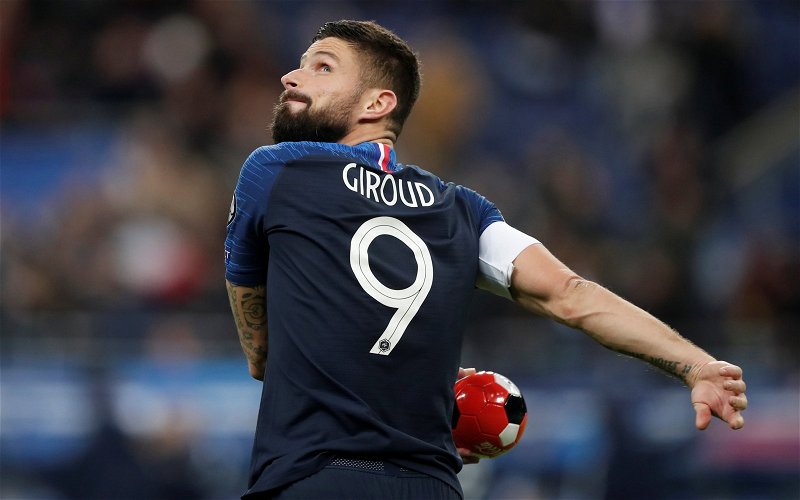 The things the Peepul will swallow; you have to marvel at it.

Some of it is so remarkable that you wonder if they have any gag reflex at all. You could ram anything down their throats.

The story that tickled me this week was the one about Olivier Giroud.

It was the sheer excitement of the hacks who took it up, and the delight of the Sevco fans who lapped it up, which gave me the best laugh of the post-Christmas period. Who believed nonsense like this? It would surprise you; this is Scottish football where they still think Rangers didn’t die.

Giroud had a chance to come to Scotland once before. He was heavily linked with Celtic. Indeed, he and his agent were hugely impressed by the offer our club made. He was playing second tier football in France at the time, and took a big risk in deciding to stay with his team for one more year. When a move did come along it was to Montpellier in the top flight; not a great career choice, some thought, but the player knew exactly what he was doing.

He scored 39 goals in 85 games for them, and fired them to a title.

The next club to come calling were Arsenal, fully vindicating the strategy he and his advisors had outlined. He has been brilliant in England, even in spells whilst at Chelsea. His career trophy haul has not been what it should have been but it still includes a Europa League, three FA Cups and, oh yes, the World Cup itself, which few players ever get their hands on.

At 33 he’s at the end of the road, with one last big move in him. He can pretty much pick his destination; China, the United States, the oil rich states or another few years at the sharp end of the game. Clubs in England and France would certainly like him.

It’s only natural, then, that he would consider trading all that in for a shot at an SPL runners up medal and a massive wage cut. What a glorious end to his career that would be, right? Instead of playing games in places like Los Angeles and Miami he can sample the simple pleasures of long ball football at Ross County as a savage wind blows and rain pours down around him.

The Daily Record were loving it.

Two of their writers wrote stories on it within hours of the rumour going viral. Giroud has “a major decision to make” according to one of them; yeah, there are so many ways you can so “no” when you’re asked a stupid question.

Good God, are these people serious? Or do the writers at that rag really believe this stuff?

Graeme Young, the writer of that piece, also hinted that a move to Ibrox could keep him in the plans of the French national team boss. But the coaching team there is already watching Scottish football and it is far more likely that Edouard would be in their long-term plans and probably only after he leaves Parkhead. What chance does a past-it Giroud have? Or do Sevco think the arrogance of the top leagues ignoring the game here only applies to Celtic Park?

What impressed me most about this story was how quickly it collapsed. Gerrard was asked about it and denied any interest. I might not rate this guy as a manager but he is partially sane. He realises that this is pie-in-the-sky nonsense.

It is not the first time he’s shot down a ridiculous Ibrox transfer story either. He pissed off the board earlier in the season when he admitted that nobody had come in for Morelos, and again when he laughed off Juventus “interest” in Glen Kamara.

He already knows that expectations are unrealistically high over there. He certainly doesn’t want to add to them with flights of fancy like this. That won’t stop the media though. They will continue to salivate at every rumour no matter how ridiculous.

The truth is, Sevco better have something pretty big on the horizon for the window.

Celtic looks set to go into the January break with a substantial lead and our own team strengthening efforts are already well underway.

Sevco fans will expect rabbits out of hats … the media certainly does.

How dumb these Peepul are.

They are headed for hard times.