Sevco’s Self Pitying Wailing Is Delicious And It Stops Them From Doing Any Self Analysis. 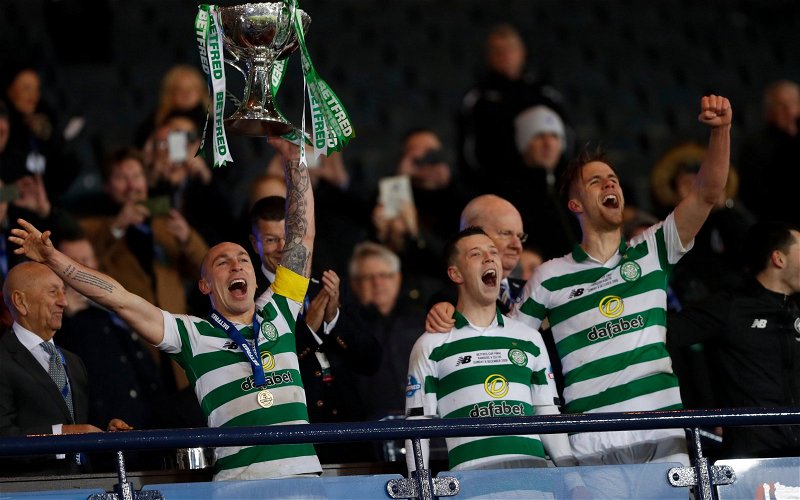 For all the rammy this has caused, it was Big Bad John Hartson who’s response to it summed things up for me; he posted a still photo of his own “offside” goal in the cup final of 2003. That was one of the most appalling decisions I’ve ever witnessed.

At the time we were told to shut it and move on before, of course, Hartson missed a penalty late in the game.

Well, Sevco missed a penalty yesterday and from the point it was given they played against ten men.

All the wailing in the world isn’t going to change it.

Bad decisions happen. They happen to us, all the time. They have happened to us throughout the unbroken history of our club. They will happen to us in the future.

This is how it has always been.

There are some who will say we got a tight one yesterday … others will howl at the moon and claim conspiracies.

Alex Rae was convinced by footage shot from Fraser Forster’s point of view … all the way down at the other end of the pitch.

How long before, in his anguish, Tom English – who’s meltdown yesterday was magnificent – is posting nonsense such as this; “”I was finally convinced when I saw footage shot from the Hubble Telescope. Not only can you see that the players were offside, there was also a guy in an Archbishop’s outfit slipping the fourth official a few quid on the side-lines …”

There is a great video doing the rounds on Facebook – the CelticBlog group has it up – which shows that the goal wasn’t offside.

Even if you don’t accept the evidence, and to me it’s pretty conclusive because all those still photos show the position of our players before the ball was played, the decision was tight. It was close. All the talk about it being clear-cut is rubbish.

By the same token, the red card for Frimpong is a joke. It’s as clear a penalty as you’ll get – the others which Sevconia is banging on about weren’t even close – but the decision to dismiss the player is a joke. The penalty miss was karmic justice for that dreadful decision.

Above and beyond all that is this; there is no takeback, there is no do-over, there is no reversing the decision. The match will not be replayed no matter how much foot-stamping is being done across the city. The result stands. The trophy is back at Celtic Park.

These are the facts of the case, and they are undisputed.

I don’t care how we got over the line. Because when there was a team called Rangers playing at Ibrox they never cared. They won trophies on dodgy decisions and never let it bother them one bit. They cheated for years with EBT’s and feel not the least bit bad about it.

Their pain is a source of enormous pleasure for me.

My satisfaction over the result has only been enhanced by the wailing of the Nearly Men.

It pleases me that they think they were hard-done by. It gladdens my heart to know that they are, as per usual, focussed on the wrong things, that they are moaning and bitching over bad refereeing and injustice rather than looking at the mistakes made inside their own walls.

It wasn’t that we rode our luck yesterday, it was that the Sevco manager was incapable of retailoring his approach. Even when faced with ten men and needing a critical goal, he was unable to make the changes that would have gotten them one. His was the worst performance of the whole day, if you exclude that of Ryan Kent who was owned by a kid playing in the biggest game of his career and who at one point turned him inside out.

Gerrard has been at Ibrox for a year and a half and has spent £20 million.

He has won nothing.

His team has failed on the big occasion every single time.

Whenever they are under pressure it ends in disaster.

He is a chequebook manager who, from here on in, will be forced to write bouncy cheques.

If I were a Sevco director I’d be looking for his replacement already.

I love that none of Gerrard’s failings, or those of his team, are being considered.

I love that this is all about the breaks they didn’t get and the decisions that went in our favour.

It stops them from doing real self-examination, and that’s what they need more than anything.

Our cup win yesterday continues our utter dominance of the hapless Ibrox NewCo … but how well do you know the history of our successes over them? Try our new quiz and find out.