The Media Has No Interest In Ridding Our Game Of Hate. This Weekend Proves It. 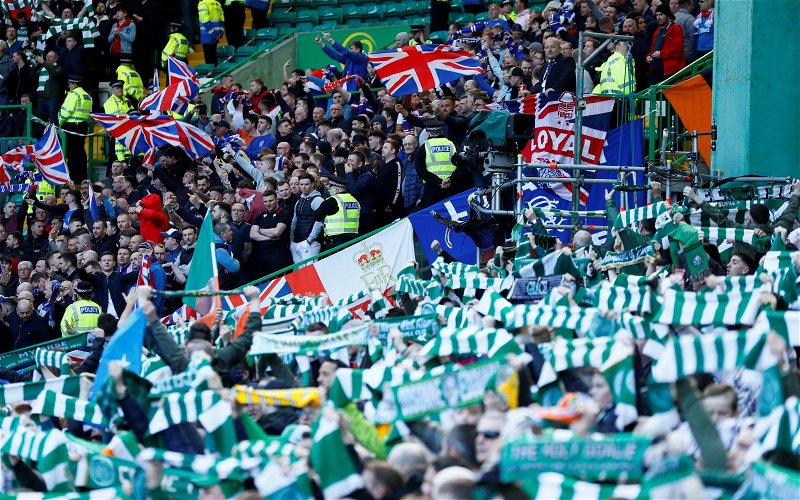 Yesterday, in England, racist chanting marred the game between Chelsea and Spurs. It is another in a long line of desperate moments in football across Europe. This kind of thing is sweeping across the whole of the continent, and nobody seems to want to grab it.

What made yesterday worse is that Sky Sports decided that the story of the day was the one thing they were not going to discuss on their show.

So the racist chanting was glossed over, instead of being confronted in a way that might have done some good. The broadcaster has since apologised.

It reeks just the same. There are sections of the press which don’t want to touch this, lest it bring disrepute on their feted product, “the greatest league in the world.”

Today a story broke in Scotland, about Sevco signing a partnership agreement with Orange County SC, a team sitting mid-table in the Western Conference of the US league second tier.

We’re supposed to pretend not to know what appealed to some folk at Sevco about that hook-up.

It’s not quite so bad as refusing to discuss outright racism in England but it treats the Scottish public like we’re mugs.

And it’s not the only example of the media playing this game.

A couple of weeks back, Neil Lennon was asked about the possibility of Celtic and the Ibrox pretenders being drawn together in the Europa League. He used the word “carnage”, and whilst I don’t want to take issue with him for doing so, it’s a wholly inappropriate term.

I wish he’d never done it.

He was joking, and he made that abundantly clear, but it was the answer the hacks wanted, and it gave them license to go into a frenzy.

“Celtic and Rangers Europa League tie would mean declaring a state of national emergency” screamed the headline in The Sunday Mail, in an article written by Gordon Parks which elevated hysterical to new levels. “It would mean three (Celtic v Sevco games) in the space of a week in the middle of March and as momentous as it would be, it would be the cue for mayhem,” he wrote, with the glee reflected off each and every word.

He quoted Lennon, and said “he took a big breath and said: ‘Carnage’.”

Actually, there was no “deep breath.” Lennon made it clear that he was joking. “I think I’d watch the games from Barbados,” he said, which Parks didn’t bother to quote as that would spoil the appearance that Lennon was seriously concerned about the prospect.

This is how we hype the possibility of the two best teams in the country possibly being drawn against each other. With talk of blood on the streets. This is why we’ll never, ever, ever get past the hatred. The media loves it. They thrive on it.

And whether they want to admit it or not, they encourage it.

The media in this country has never gotten serious about tackling sectarianism; it is part of the game as far as they are concerned, and it suits them to cluck their tongues at those who indulge in it whilst deplorable hacks like Park paint a picture of Scotland as a warzone in the event the two teams have to play each other a few times back-to-back.

There are some of us who have spent years decrying the hatred that surrounds the Glasgow derbies, both the previous one, involving Rangers, and this one.

There are some of us who refuse to use the term Old Firm, not only because one half of that rivalry is dead but because we never accepted that the rivalry reflected our club in the first place.

Through all of it, the media has rammed it down our throats regardless.

We’re told that the two clubs “need each other”, something the Celtic board flatly denied in 2012.

The picture the hacks paint – of two clubs who despise each other but who are intertwined in that hate – has held this game back for decades and it continues to hold it back. It is one the reasons why neither club stands a chance of ever being invited to join a cross-border league.

Nobody in England – where this weekend shows they have enough problems – wants this nonsense exported and dumped on their door. Who can blame them?

The Scottish press is never letting go of this.

If they were serious they would have campaigned hard long ago to have it removed from our grounds. Instead they will encourage bile and bigotry, they will push every conspiracy theory they can, they will elevate the Survival and Victim lies to the maximum … all of it without accepting a shred of responsibility when things do kick off.

I sincerely hope that Sevco does not go through in the Europa League, because I do not want us to meet them in that competition under any circumstances.

The media gets crazy enough when these sides meet in the league, with every encounter reimagined as a battle.

Park has shown how they would react to the prospect of three in a week … with lurid headlines and sensationalism, all of which would only seek to invite the very trouble they predict.

Then they would blame the fans, of course, as usual.

Never once a look in the mirror.

Never once an acknowledgement that they might be part of the problem.