This Record Breaking, All Conquering Team Deserves All The Credit It’s Not Going To Get. 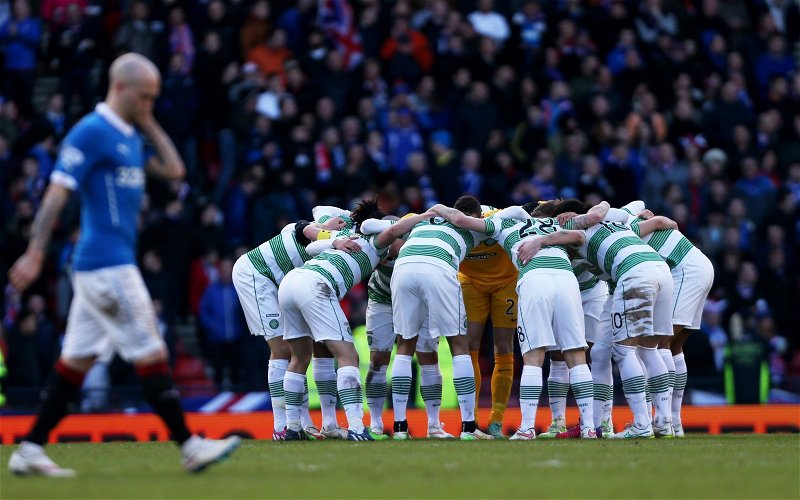 Yesterday was a triumph. There is no other word for it. It was one of those results, one of those matches, that cut through weeks of media spiel and nonsense and got right to the heart of what’s true and what isn’t in Scottish football. It was a myth-buster.

I’ll deal with some of those myths in other articles over the course of the day and perhaps the week; obviously there will be major repercussions as a result of yesterday, and we might not know what all of them are for a while yet.

First and foremost, though, this is a result which means everything to us as Celtic supporters.

This team has set so many records. It has made so much history. This is another massive victory, and the manner in which it was won should send a clear message to everyone out there; even when this team is not at its best, it still has formidable weapons at its disposal.

Chief of all those weapons is this will to win that cannot be broken. The last minute winner at home to Hamilton last midweek should have scared the Hell out of our rivals before yesterday. When they didn’t score in the first half you felt it was a matter of time before we hit them with the sucker punch. From then on I knew we’d won the game.

Even the penalty kick – when I saw who was taking it – was never really something I let worry me. Yes, there were nerves aplenty, but something had settled over me after the goal and it stayed with me all the way to the whistle; a kind of knowledge that we’d got it.

It all boils down to what I was writing last week, from at least Wednesday night and even from before; pressure crushes teams who aren’t used to it.

The media spent so long telling the Ibrox horde how brilliant their team was that those within the Sevco bubble never once stopped to consider that they might not be.

They weren’t built to deal with reality.

When the chips are down, this Celtic side thrives under that kind of pressure. We can win games in style, but we’ve got that nerveless ability to grind them out too. We can win with ease or in such a way as to resemble a smash and grab raid.

These players want to win everything.

They want to keep on setting records.

They want to keep the foot on the throat of the scaly old reptile of Ibrox.

Had we won comfortably yesterday, the Ibrox club and their media acolytes would have found some excuse, or they would have focussed on some flashpoint or other as a deflection.

They don’t need any of that today because Sevco was the better team – I’ll go into what the decisive factor in that was later on – and because there were some questions over Celtic’s goal. This means that nobody will give due consideration to what Celtic has done here; all the focus will be on the Ibrox hard-luck story.

We’re getting none of the credit we deserve and nor will we.

As I said, we wouldn’t have gotten it anyway.

The media is not built for honouring Celtic. For the last few years we’ve heard that our dominance is actually bad for the game; look out for more of those sorts of headlines in the coming days, and especially weeks if the Ibrox club falls further behind us in the league table, as I fully now expect them to do.

We have won 10 cup competitions in a row.

Our unbeaten record in these games is now so vast I know it has to be without equal.

That is dominance that no other club has ever enjoyed in the whole history of the game here.

The press should be doing 20 page pull-outs on how remarkable that is.

The whole of the sport should be paying tribute to a remarkable club side that is blowing away the achievements of all who have come before them.

In domestic terms – and those are the only ones that count in an era of club football which has become separated into a handful for uber-rich teams and the rest – what we have done here is incredible beyond words. This is a once-in-a-generation team.

But not one newspaper is writing that.

All that’s left, then, is for us to go on and do more and win more until they are forced to come to terms with it.

Because I see no signs of this dominance ending.

Our cup win yesterday continues our utter dominance of the hapless Ibrox NewCo … but how well do you know the history of our successes over them? Try our new quiz and find out.