Has The Scottish Media Run An Anti-Celtic Lie? And If So, Why Aren’t They Angry About It? 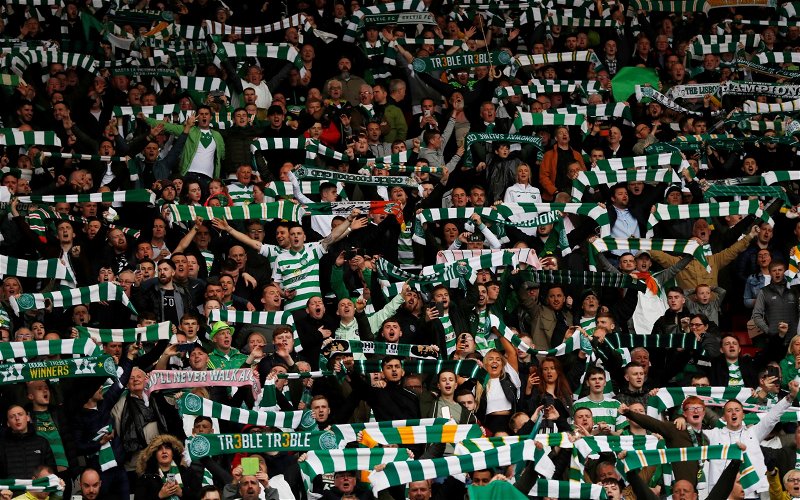 In the aftermath of the match on Sunday, a number of allegations were tossed at Celtic fans by Sevco and by the mainstream media. Whilst allegations that Morelos might have gotten a bit of sectarian verbal have generated a lot of heat but not much actual verification, they are partially believable and not because the Celtic support is inherently racist.

Those demanding proof should be careful what they wish for, because let’s be honest; in the heated atmosphere of that match, it’s surely not out with the boundaries of possibility that there was at least one raging idiot in our stands who fell below the standards of our support as a whole and into the gutter?

Is that difficult to accept? Not for most people.

Putting a Celtic shirt on someone does not make them a saint.

Where I draw the line is with the idea that this was large numbers of people, as Sevco itself has hinted at. The club should have mounted a defence against that insinuation, and should not be allowing that slur against the support as a whole.

I still think their response to this has been gutless. But against the charge that there was some racist chanting at him, I think it’s better not to offer up the massive hostage to fortune which would be saying “absolutely not, it didn’t happen.”

I am content to know this much; racists are amongst the most unwelcome types at Celtic Park. Anyone who did shout at Morelos in that fashion would have been quickly ostracised for it, and I would hope also pointed out to stewards.

I know that happens because I’ve seen it happen.

It’s one of the things that our support just will not tolerate at all.

It was not the only allegation made against our fans; a higher profile charge was that our fans were throwing coins, seats and other objects at the Sevco support. The evidence for this is almost non-existent although it should be much easier to prove.

Surely footage exists? Surely there are police reports, especially if someone got injured?

Which of course, somebody did … or at least, somebody claimed they did.

And this is the story I really find fascinating here, the allegation that a fan was treated by paramedics after being struck by a coin or other object, as part of a hail of stuff that was being thrown at Sevco’s tiny band of supporters. It is a serious charge.

Something like that, well the press should take great care in reporting it. A certain amount of due diligence should go into it. Yet the only due diligence that appears to have been done has been done after the fact, and not by the media at all … but by Celtic fans.

A lot of the story simply doesn’t add-up; The Celtic Star has done a number of articles on the holes in it, and there are many of them.

There’s also a piece of video footage which purports to show the guy being treated … and a police officer behind him who’s acting out what seems to be the circumstances in which the guy got hurt. Running and falling.

Somewhere, out there, is an incident report. Has the media seen it? Is this guy telling the truth or is he at it? Is he someone who saw a chance to turn his own stupidity into an opportunity to attack Celtic and its supporters … and found a willing fool at The Sun newspaper?

Let’s ask something else; did they pay him for the story, and if it’s untrue, isn’t that fraud?

Let’s ask a couple more; first is this.

In light of social media examination of the tale and the lack of supporting evidence, is the media still happy that this story is accurate? Because The Sun ran it, and then other newspapers – most notably The Record – repeated the allegation.

Next, if it isn’t accurate, if they’ve been done up here, isn’t that, in itself, a news story and something that would offend and anger any reputable journalist?

The last I heard the media didn’t protect sources who lie to them.

They certainly don’t protect people who use them to further their own agendas, enriching themselves in the process. They don’t allow a proven work of fiction to be carried in their pages and online as if it were a fact, because that brings the credibility of the media as a whole into question.

Now, Celtic cyberspace has not proved that this story was a fake … this is a disputed account, much like the one The Sun is levelling at us.

The writer of the piece is Justin Bowie; he claimed it as an exclusive.

Yet look at the title that’s been put on his article; “Celtic vs Rangers – Gers fan ‘knocked unconscious after being struck by coin’ at Celtic Park during Old Firm match.”

Those ‘’ marks denote that they’ve been given this story verbally.

The article itself is very careful to use the word “claims” … in short, they haven’t seen single bit of proof for this except a guy’s bandaged head.

All they have to support this is the word of the guy himself.

The article makes other wild claims, such as that Celtic fans pelted their fans with objects continuously through the game, and especially at the goals. It then goes on to include Celtic’s own statement, as if this supports the central allegation … except that Celtic’s statement suggests that it was the away fans who were engaged in that behaviour and not our own.

Nowhere does the report acknowledge the contradiction. Instead, it is a highly personalised, highly sentimentalised, account of how a poor old granddad was the unwitting victim of violent conduct by our fans. Without a shred of supporting evidence.

This is the line that closes the article; “Police Scotland has been contacted for comment.”

So no police report had been viewed at the time The Sun decided that this was a credible story.

Their writer had not one item of actual proof.

They could have waited until Police Scotland got back to them, but this was a rush to judgement, a rush to print, in order that the guy responsible could slap the word Exclusive beside his name … and if it smeared our club into the bargain, however unjustly, well clearly that was a secondary consideration if it was a consideration at all.

So I ask again, did the media get done up here, and are they happy with that? If the story is accurate I hope whoever’s responsible gets caught and prosecuted and banned from Parkhead for life, but I am suspicious of this one and not least because of the shabby reportage.

Was the chance to stick the boot into our supporters the paramount consideration here, and does it remain one, above all journalistic integrity and their reputations of the writer and the paper both? I mean, if this story turns out to be cobblers then isn’t that worrying for the paper?

I mean, is it this easy to make shit up and get a story in The Sun?

If it is, ladies and gentlemen, start your engines.

Cause God only knows what fake news we could generate ourselves if only we were minded to try.