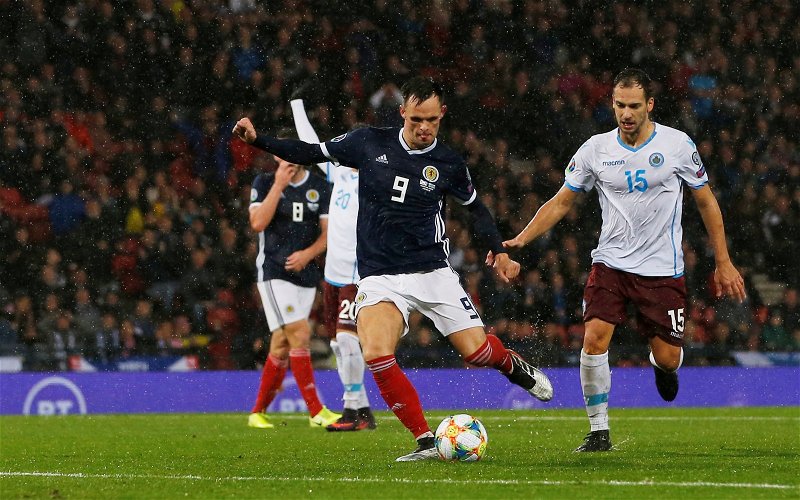 The news that Celtic scouts have watched Lawrence Shankland has to be the least surprising revelation in the history of Scottish football.

Why wouldn’t we watch a player who has 25 goals in 26 goals in the second tier this season?

But let’s not mistake this for anything it’s not.

I very much doubt that Celtic has any real interest in signing Shankland. We send our scouts to watch him just in case there’s a not to be missed footballer here, but watching him against Hibs that’s not what they would have seen at all. No wonder reports today suggest we “cooled our interest.”

Our “interest” was the rational one; if there’s an unpolished gem on our own doorstep we don’t want to miss out on it.

The media, with its need to blow things out of proportion in order to get headlines, chooses to interpret that as Celtic “preparing a bid”, and there is, of course, an interest in trying to turn it into an “Old Firm” transfer tug of war … but all untrue.

Our team has to be built around a core group of Scottish players.

That’s a UEFA requirement as much as anything else, and so there’s no way we’d not go and watch a player like Shankland.

But as I said in a previous piece – the one on Morgan – there is a mighty jump from being a Scottish Championship player and an SPL footballer … a bigger gap than some think.

Shankland scored yesterday, of course, but his performance was pretty poor overall. I have little doubt that Celtic’s scouts would have taken a simple message back to the club “Not good enough to get into the squad” and really that’s the bottom line.

I’ve said it before; if we were going to sign a player from Scotland right now – and especially a striker – it would be Cosgrove at Aberdeen; he isn’t Scottish but he’s scored nearly as many goals as Morelos without a fraction of the hype. He’s a better option than taking the punt on Shankland would be.

I’m definitely not saying that Shankland is a bad footballer, but I have yet to see any evidence that he’s better than average.

He has recenty won his first caps for Scotland … and even scored. This is all the more reason for keeping an eye on him … but it doesn’t mean that anything more will come of it than that.

If he was coming in, who’d be going out?

Would you take him over Griffiths or Edouard?

Would you see him as an adequate replacement for either?

Of course you wouldn’t.

The issue doesn’t arise, because we’re not looking at him seriously with any intent to buy him … we’re simply making sure we aren’t missing something special.