The Unravelling Of The Morelos Myth Has Heaped Disgrace On The Media And The Sevco Support. 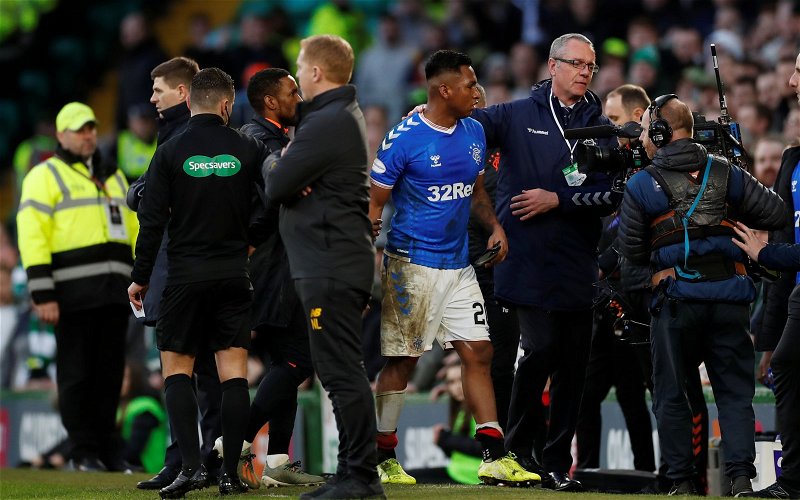 If you’ve seen the newspapers today, you’ll know what the biggest story of the weekend is about.

It’s about the unravelled of a myth.

It’s about the bursting of a great big bubble, an artificially inflated lie, about how the Colombian ned Alfredo Morelos is the most put upon man in Scotland.

It has never been true.

He has been the architect of his own misfortune, and when, last night, someone sent me the headline for today’s Mail I was not in the least bit surprised.

I’ve known for about three or four weeks now that there was a mammoth story about Morelos doing the rounds out there, a story with more twists than the Indy500.

I’ve telegraphed that knowledge a few times in articles during that timeframe.

On 11 January I wrote the following, in a piece on the SFA’s Ryan Christie verdict;

“Mark my words, those who are defending (Morelos) are backing the wrong horse … this does not have a happy ending. Remember this; if you’re going to work hard to paint someone as a saint, you better hope to God that they are. Sevco will not be the only ones who look ridiculous if he turns out not be. If he turns out to be just another spoiled footballer driven by his own ego, then Hell mend those who have nominated him for ‘statues outside Hampden’. They will look just as bad as he does, and very stupid to boot.”

When I read Bill Leckie’s scathing Sun piece a few days later I wrote an article on why it was spot on and I slipped this little comment in at the bottom.

“Morelos is getting an infamous name. I find it interesting that Leckie felt able to take such a shot at him. If you didn’t know any better you might swear that there’s a story about Alfredo bubbling away out there, ready to erupt.”

Last week, as everyone knows, the story broke that he had found someone “tampering with his car.”

Almost immediately, his media supporters club was leaping to his defence and painting a picture of an attempted murder; allegations that his brakes had been cut were rife and some – like Gary Ralston, who just loves making a raging prat of himself over this player – were happy to give credence to those outlandish and inflammatory claims.

It was both shameful and dangerous the way so many of them were willing to jump to the worst possible conclusion.

My social media team and I had a full and frank discussion over on Facebook about how best to handle discussions about the story in the Group, a story which even then we knew was absolute bunk.

We had our own alternative theory, which we weren’t going to broadcast for reasons which should be obvious.

It had nothing to do with Celtic fans or people trying to drive him out of Scotland, and everything to do with the way Morelos’ private reality might be about to crash down on him and obliterate his public canonisation by the press.

We kept our thoughts in-house.

Because, after all, the idea that this might be some lone halfwit was not outside the realms of possibility.

We knew there had been no “cutting of the brakes” or any such hysterical garbage, but some guy out for a spot of vandalism?

Not impossible, although the average person wouldn’t have known Morelos’ car if he or she was being run over by it.

The car itself had been parked in a secure area, another sign that this wasn’t some ned out for a bit of payback because Morelos keeps threatening to score against us.

No, it seemed like a “professional” job … someone who knew their business, knew what they were looking for and weren’t particularly bothered about gates or CCTV.

Not folks out for their jollies but people highly motivated – by other than football – and willing to take risks.

As it turned out, we were wide of the mark but not by much.

Our arrow hit on the outside rings of the target board instead of dead centre, but we were shooting in the right place.

The truth which has emerged here – about how his wife hired the guy, suspecting Morelos has been cheating on her – sounds utterly bizarre, but only if you don’t pay attention to the Glasgow grapevine and the myriad stories that are out there.

Phil and I discussed this stuff at length about a week and a half ago, and whilst he contends, quite correctly, that the “public interest” and “stuff the public is interested in” are not the same thing I countered with the argument that it is Morelos and his people, and the media, which put his conduct away from the pitch within the public sphere, with all this talk of charitable work, painting him as a paragon of virtue.

The Record even posted sickly sweet pictures of his beaming wife and her bump just the other day, promoting him as a model father-to-be.

Look, I don’t give a monkeys what someone does in private.

None of that should be in the public domain because Phil is correct; none of that is in the “public interest” and that defence cannot be sustained by anyone who publishes that sort of tabloid trash.

My concern here is with the hypocrisy of the media itself, that and the churning madness of the Sevco support, which is so consumed by hatred that it believes it sees that hatred in everyone else, when actually all they’re doing is looking in the mirror.

None but a handful of level-headed folk on their forums even tried to talk sense to the rest of them this past week when the story about Morelos’ car broke. That handful should be commended for their good sense and judgement.

The rest of them shamed themselves, their club and the country they live in by diving deep into the darkest part of the conspiracy pool.

The media has proved itself beneath contempt yet again, and especially those at The Record who could not wait to embrace the most horrifying theories and run wild with them. It led to folk like Josh Windass, absolutely disgracefully, spreading their own unsubstantiated garbage for the whole world to see.

For a day or two there every headline screamed of Morelos being the target of a highly sinister plot, and that disgraced our whole country although barely a word of it was true.

One of the most depressing pieces came from The Evening Times and Herald journalist Graeme McGarry, who’s article actually posed the question as to whether some in his own profession were complicit in trying to “hound the player out of Scotland.”

I was dismayed by that piece for several reasons, first that the question itself is so obviously ludicrous that it shouldn’t be seriously debated. The thing is that the article was actually pretty excellent and definitely well intentioned; that much is pretty clear.

But it started with a discussion about the “tampering” with the car, and was willing to leap to many of the same nonsensical conclusions as others had. McGarry’s “best case scenario” was that this might be an attempt by a criminal gang to plant a tracking device on the car so that they could steal it later. His worst case? You don’t need me to spell that out.

This is how effective the campaign to paint Morelos as a victim has been; that a national newspaper which still clings to something of its reputation, and a patina of respectability, should engage in soul searching about whether its coverage of the player has been entirely fair.

I applaud McGarry for the intent behind the piece, but despair that he ever succumbed to the need to write it in the first place.

The Record has no excuses whatsoever, and that their sister paper has published the truth today does not alter the fact that they sensationalised the incident to the nth power in the first place and pushed the darkest conspiracy theories they could in relation to it.

And there’s something else; it is now abundantly clear that Morelos’ own wife believes that he’s been up to no good, and that she has reasons other than internet gossip to hold that view. She hired a professional to get to the facts; I don’t believe that’s a woman harbouring doubts about her suspicions, but one who’s way past that and is in the process of seeking confirmation and irrefutable proof of what she already believes.

If that’s an accurate assessment of this situation, then the media has probably known about this stuff for longer than I have and is most probably working off better information by far. I am not suggesting they should have run those stories, even if they had the facts locked down, with every box ticked … it’s nobody’s business.

No, what I’m suggesting goes to the heart of their credibility, and trustworthiness, because if they have been aware that all was not rosy in the Morelos marriage and in his private life they have been hiding the truth behind a smokescreen of barefaced lies.

If those stories are true then some in the media promoted an image of Morelos that they knew to be wholly fictitious; this picture of a dedicated family man, selfless, devoted, a modern day saint. I am saying that all the stories about Morelos the victim, as a man picked on by Scottish society, were a fraud and that some of those who wrote them knew full well that they were. I am saying that some of the editors who published those stories acted dishonestly.

Was Bill Leckie one of the few who just couldn’t stomach it, who wasn’t prepared to live with the fiction, who just wasn’t willing to slap on the whitewash? Are there others in the media who are disquieted over the pushing of such obvious deceit?

I would not be surprised to learn that there are.

Others are more than happy to go along with it, but today they should be hiding under the bed, such ought to be their shame. Do they still think Morelos deserves “statues outside Hampden” or are they over that particular fever-dream, with reality suddenly dawning?

This has been another week of shame for the profession here in Scotland, and it’s been another one in which the dregs of Sevco social media have wallowed in the dank cesspit of their paranoia and hate, projected their madness onto the rest of this country.

Morelos is still at Ibrox. He will be here now until the end of this football campaign.

I am actually more and more coming to believe he’ll be there next season as well, because the club continues to grossly overvalue him and the kind of sides which might be willing to take a punt on him for less are still going to want to vet his background and examine his on and off-field behaviour … and that’s where the wheels come off, because the newspapers in those countries don’t employ Gary Ralston, and so they can’t take sycophantic coverage for granted.