There Are People In Our Game Who Peddle Hate. We All Pay For That One Way Or Another. 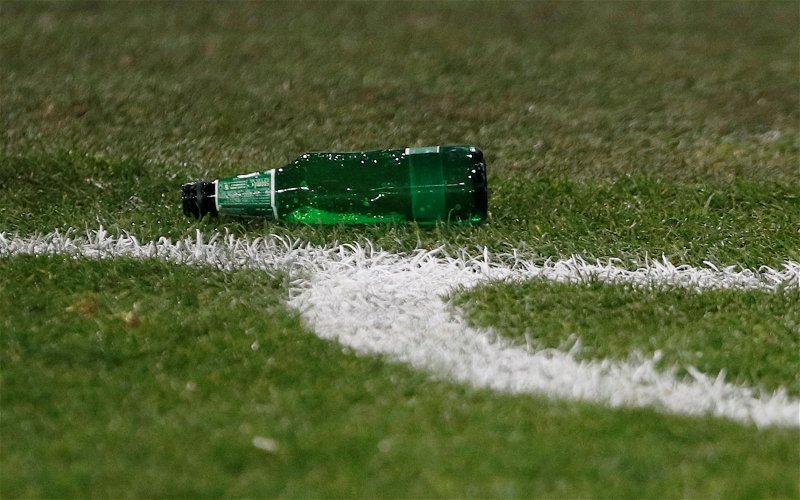 One of the most outrageous, and brazen, pieces of hypocrisy I’ve ever seen in my life happened in May last year when Nigel Farage stood in front of the TV cameras and railed against the hatred that had been directed at him after someone had thrown a milkshake over him during a “walkabout” in Newcastle during the European Parliamentary elections.

“I am concerned because of the behaviour of individuals like this, the normal democratic process cannot continue in a lawful and peaceful manner,” he said.

It was hyperbolic nonsense, and it stuck in the throat primarily because Farage has long used the freedom afforded him by the law and even the “democratic process” itself to lie and spout bile at some of the most vulnerable people in society.

At a time when hate crimes were being recorded at ever higher levels, in no small part because of the dire rhetoric he himself had introduced to the mainstream, it was awful to watch him stand and play the victim card and know vast swathes of the media, who themselves have spent years whipping up hatred, would be four-square behind him.

Part of me wanted to slap the hell out of the guy responsible, for handing Farage and those like him such a weapon to use.

For making him a martyr when he was anything but.

For letting one of the most intolerant men on the planet spout off about intolerance.

The perpetrator said at the time “The bile and the racism he spouts out in this country is far more damaging than a bit of milkshake to his front.” That didn’t cut any slack with a judge or his bosses. He lost his job, got a fine and 150 hours of community service.

That might seem pretty harsh when many people think what he should have got was a medal.

Farage and many others on the far-right of the political spectrum have always used the dog whistle, and they have never cared whether that had social consequences.

The murder of Jo Cox came at a time when our politics was already poisonous; it has gotten worse.

Those who talked the language of treason, of a nation betrayed, of destiny thwarted, must have realised that something like that could happen … but it was alright, because it wasn’t happening to them.

Trump too reels every time he comes in for criticism, no matter how slight.

It’s the same with other politicians and figures of the right; they talk hard, but when the chips are down and the forces their conduct has unleashed come rolling back towards them, even if it’s a chill breeze and not the full hurricane that smashes into their intended targets, you see what they’re really made of.

They wail like little bitches. They decry the very intolerance they’ve been feeding.

Because that’s the problem when you feed paranoia, when you stir the pot of hatred, when you whip up the mob. The mob doesn’t differentiate between one glib sounding geezer in a suit and every other one. The mob is mindless, and when it rampages more than just the innocent get punished. Paranoia and hatred are like a virus; once they are out there they spread, widely, and they mutate along the way. They are a self-sustaining force.

Who should be surprised when it gets out of control, like vicious dogs that have slipped the leash? They are just as capable of turning on their “owners” as they are of terrorising the neighbours. Those who deal in that currency are often paid back in the same.

Jo Cox’s killer came from the far right; those scumbags who peddled the hate that inspired him stood and washed their hands of him on the same day. “Not in our name,” they said, as if horrified that the ideas they had espoused could have inspired such a response.

No-one else was surprised by it, so I find it hard to believe that they truly were.

But I know this too; if the killer had come from the left, had the target been a Farage or a Johnson or a Raab, those same people would have been rushing to the microphones like Pavlov’s dogs hearing the dinner bell.

They’d have gotten on the podium and excoriated liberals of every stripe, and accused them of being the ones who sent the hate in motion.

I thanked God every day, for weeks, that the guy with the milkshake hadn’t been carrying a jar of acid. I thanked God he wasn’t a Muslim or a Romanian or a Bulgarian, or even just a French student who’d had too much to drink and chucked a brick on the spur of the moment.

Parts of this country would have gone up like a bonfire. People like Farage would have made sure it did. The liberal left has some truly clownish individuals in its ranks, but you show me our Thomas Mair. You show me our Charlottesville.

For all that, we cannot be complacent. We cannot think forever that the peace will hold. Send enough hate into the atmosphere and it will pollute everyone, and taint everything, and the forces it unleashes will not be contained by appeals to the better angels of our nature.

This is how societies break down. This is how communities are truly torn apart and once it starts, as Dr King once said, you’re in a descending spiral which multiplies evil instead of destroying it. That’s why I mourn the use of violence to confront hate.

That’s the terrible price of stirring the pot of tension and hatred, of promoting it, of manufacturing it, of using it to score points or deflect or simply to watch things burn.

Things might burn, but those who stand with the matches in their hands should know that they may not be shielded from the devastation wrought by the flames.

If the wind changes direction, it all goes.

I am depressed today, but I’m trying not to be angry.

That’s the last emotion I want to feel, the last thing I want to give vent to.

Truth be told, I’m not even 100% sure who I’d be angry at … those who peddle hate or those who react to that?

No, this is a time for calm and measured and steady contemplation.

A time to ask what we can all do, collectively, to stem the tide before it sweeps us away.

There are people who would dearly love to unleash those forces in full.

We cannot let it happen. There’s too much of that hatred out there already.

Those who have doled it out and who continue to; this is the moment to say “Stop!”

This is the moment to look at what’s staining your own hands, before you start pointing fingers at other people, before you ratchet the tension up another notch, before you turn the dial and increase the temperature even more.

Those who think slapping their way to satisfaction is an answer to the frustrations we all feel; you are part of the problem.

You are, in fact, exactly what you claim to abhor.

But at the same time, no-one should be allowed to indulge in the hypocrisy of railing against intolerance from a bedrock of bigotry, paranoia and hate without being called out on it.

Because can you legitimately claim to be a victim when that is your stock in trade?