Two High Profile Members Of The Press Have Fired Back At Sevco Over Last Night’s Statement.

The silence from the bulk of the Scottish press over the statement from Ibrox last night is deafening.

Most have reproduced the story but there’s a distinct lack of editorialising.

There is a certain amount of fear in the newsrooms, and especially at the BBC who have ignored the Ibrox statement as they ignored the ones from Celtic last week.

I blame the BBC for that statement last night, as much as I blame those at Ibrox who wrote and released it.

The reason I do is simple; had the BBC stood up for their journalist Michael Stewart then the rest of the journalistic corps might have been emboldened to call out this ghastly campaign. When the BBC threw Stewart under the bus that was that.

One person summed up the general mood in the Scottish newsrooms; Hugh Keevins, who’s tweet saying that it was between Stewart and the BBC was about as gutless as it was possible to be. But he at least made a statement, even if it was typically cowardly. Most of the hacks just kept their heads down and hoped not to get caught in the blowback.

When you see the way Sevco went after Stewart, Leckie, Provan and others last night in their deranged press release there is even less incentive for people to stick their necks out, knowing that colleagues won’t back them, knowing that their bosses might not either.

The first was Graham Spiers, who is one of the only people in the media to speak up for Michael Stewart, as he did all last week. He slammed the club last night and put Traynor in the frame as the author. He recognised the style just as I did, and was even more vocal in pointing that out, drawing attention to how poorly written it was. 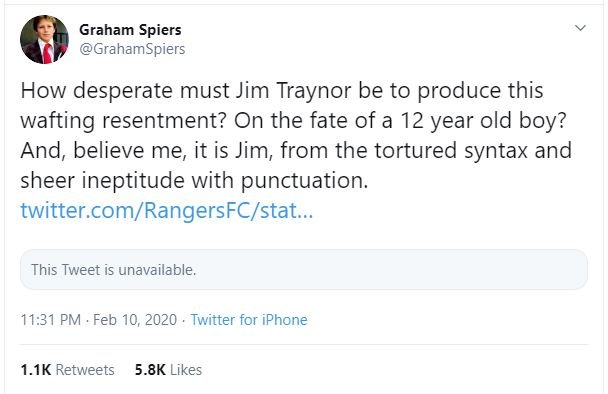 I recognised it because I spent much of yesterday reading Traynor’s work, and in particular his rabid final column for Trinity Mirror where he ranted and raved like a lunatic and a short time later took up a post at Ibrox.

It was crystal clear that the author of that barmy piece and last night’s diatribe were one in the same person.

They carry the same smell.

The second mainstream journalist to express his distaste was The Guardian writer Ewan Murray.

He reckons both the statement and the response of the Sevco fans is shocking. 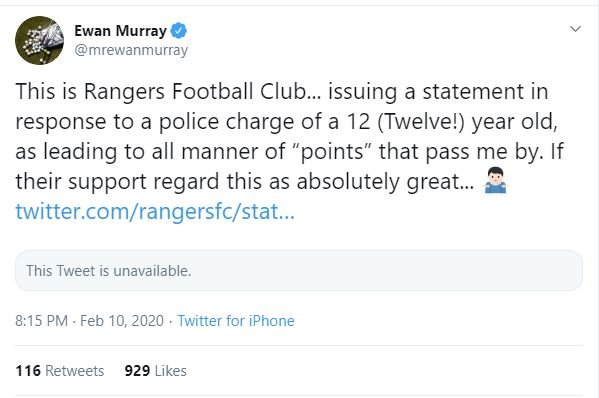 He, like Spiers, works outside of the Scottish sphere; Spiers is at The Times of London and Murray works at The Guardian alongside fanstastic writers such as Jonathon Wilson (I’m reading his spellbinding biography of Clough at the moment) Barry Ronay and David Conn.

I said in one of my articles yesterday, the one Jackson was boasting in about how The Record has won loads of awards, that the standard of journalism in Scotland is reeking and that the cream head south and enhance the titles down there.

Murray and Spiers are examples of what I mean. Both worked up here on Scottish titles.

They are where they belong.

The problem up here is, as I said, fear. Too many of our hacks, too many of our editors, still fear the wrath of Ibrox and I think some of them are afraid of Traynor too. That ought to be the subject of a longer, more explorative, piece … I may give that one a whirl.

But for now, it’s notable that the two writers who have had a go in public – although not yet in their columns – are based south of the border and walk on quality publications. They must look at the landscape up here and genuinely despair.