Fear And Loathing And Steven Gerrard. Ibrox Reeks Of Failure And The Acceptance Of It. 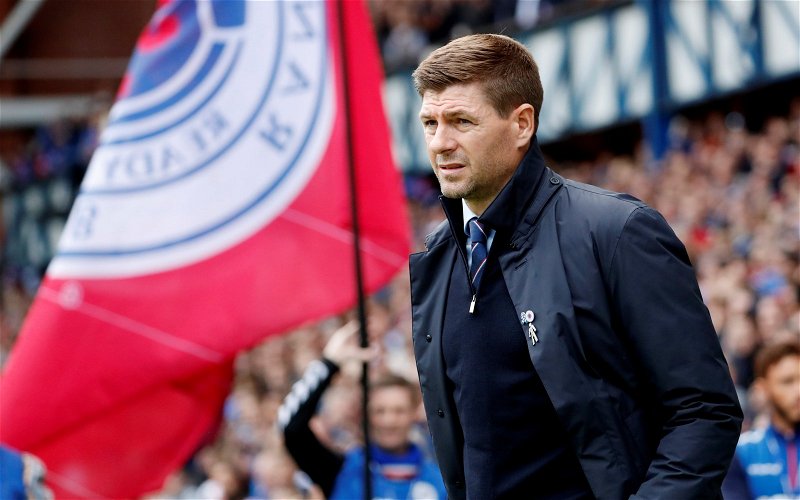 Let’s give him his due for a moment; Mr “Let’s Go” is a believer.

A believer in his own hype and the hype that surrounds his club.

He played a starring role in burning his own dressing room to the ground. He has constantly slammed his own players in the most venomous language. He has shattered the confidence of some of them. He is the key architect of his club’s disaster.

Gerrard refuses to acknowledge that. If I were a Sevco fan I would not look for a radical shift in his perception now. It’s not going to come. Gerrard is convinced of his own greatness. He is already planning next season; the deconstructing of the current team and replacing it with the third one of his brief tenure. If the club allows it they are insane.

This is an acceptance of defeat which now permeates everything at the club.

Read the fan forums. The talk is of “progress” as if a miracle had happened. He has spent £20 million. It would be absolutely ridiculous if this guy hadn’t made the team better having spent that kind of cash. They talk about him as if he were a guru. They compare his record with that of other top managers from history and ask, “Is he a late bloomer”?

One site has posters who talk endlessly of Alex Ferguson’s early record at Manchester United; they either don’t know or don’t care that he went to Old Trafford having smashed the Glasgow duopoly here in Scotland and won a European trophy at Aberdeen. This is an example of the sort of nonsense they tell themselves and each other.

But the truth leaks out every now and again, and it did last night when much of Ibrox applauded on the 8th minute in support of this loser. Can you even imagine it? Just days after Hearts had ended their season, they gave the manager responsible an ovation because for a while on Saturday night it seemed as if he might resign … and didn’t, choosing to present himself as the savoir who’ll be there as long as it takes. Absolutely bonkers.

Can you imagine the press reaction if Celtic fans chose to celebrate abject failure in this manner? The mockery would be ringing out from every media pundit.

James Tavernier, the team captain, penned a quite incredible article for the match program in which he admitted that they are weak and vulnerable to a team that gets in their faces. It was an admission that fear stalks the dressing room. No club captain should ever say those things in public, and even if he did the club itself should not have published it.

Gerrard says that the board told him they have total faith in him; that, too, is kind of incredible.

They aren’t in a position where they can afford to sack him, but they don’t have to give him their support either, in public or in private. They should know that his performance hasn’t been good enough and they ought to be scared of the way he’s talking.

His after match press conference was just as incredible. For openers, he doesn’t seem to know the difference between a blink and a wink; his comment about us “blinking” with one eye whilst they blinked with two was Pedro Caixinha style bizarre.

The dressing room was quiet, he said. Too quiet. That’s a manager, and a team, who have gotten into a rut they can’t even begin to find a way out of. Fear and loathing is everywhere; it’s on their forums, it’s in their dressing room, it’s in the stands. Last night their fans went toe-to-toe with Hamilton supporters coming out of the game. That club is in meltdown.

And whilst Gerrard is in charge there, that isn’t going to change.