Fear And Loathing At Sevco: Gerrard’s Ego Is Too Great To Let Him Walk But He’s Clearly Lost The Dressing Room. 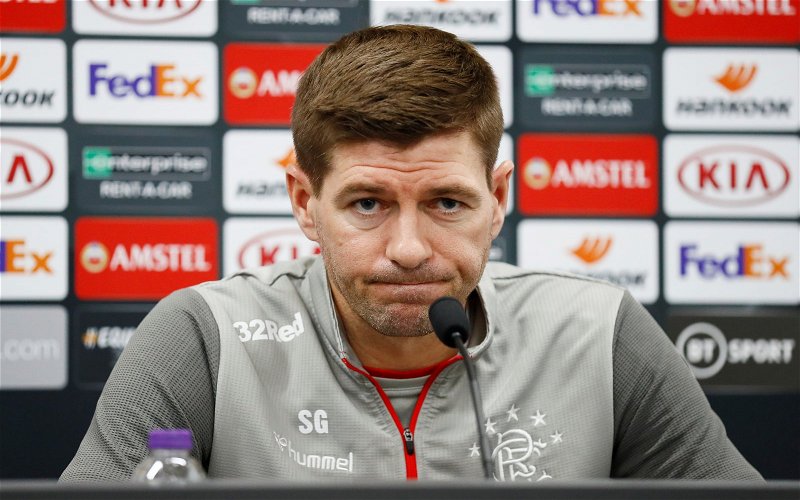 Last night, in front of the Premier Sports cameras, Steven Gerrard had his “lowest point” as Sevco manager.

But it wasn’t, as he seemed to believe, out on the touchline.

It was standing in the tunnel talking to the broadcaster in the aftermath of the match, when he said that he couldn’t face going into the dressing room to meet with his team.

Worse came later in the press pool interview, when he lamented the lack of appreciation his players have for all the coaching staff have done for them; I don’t think I’ve ever heard a manager take such a ridiculous attitude towards his own players.

Gerrard seemed to be saying that it is a privilege to play under him and that his footballers have abused it.

We are used to seeing Gerrard throw individual players under the bus. It was a matter of time before he did it with the whole squad. Coming on the day he announced to the media that Morelos had been banned from the match for getting back late from a trip to Colombia to visit his sick mother, this was a manager completely oblivious to the fact that his players were probably also smarting at not only the result but his callous behaviour towards a team-mate.

Some of the newspapers went to great pains to point out that Defoe had backed the manager; he also backed Morelos. He seemed shocked at the treatment the player had received. I wonder how he felt hearing Gerrard’s general remarks. One minute he spoke about taking time to think about his response to the result and how it was his responsibility and the next he was doing what he does best; finding other people to blame for his own dismal record.

I don’t believe the club’s “official” version of what happened with Morelos, and nobody else should either. The player trained as normal on Friday. He was in the provisional match squad. Gerrard sat in front of the press that day and uttered not one word about him.

Now, if you believe the Sevco story you could say that this was done to keep Hearts from learning that the club’s top striker wouldn’t play, but can you imagine the lift the home team would have got from finding it out on the day? To me that would simply be another example of Gerrard’s total inability to think strategically.

In my view it seems clear that there was some kind of flare-up over Friday or Saturday instead.

The news hit Sevco fans like a bomb. They would still be reeling from it if their club had actually scraped through to the semi-final. As it stands right now, Gerrard’s little PR stunt wherein he has stoked rumours about his own future, park any questions there might have been.

Gerrard is not going to quit, although he certainly made it sound as if he might. His ego is too big for that. He believes that it’s the players who are at fault, and so I very much doubt he’s going to walk away from his four-year, multi-million-pound contract when the easier answer is simply to ship out as many of the players as he can and buy another 20 of them.

And the thing is, I don’t think it will matter to anyone inside the Ibrox boardroom that this would be clear-cut lunacy. I expect they would continue to back him far into the future.

Yet for Gerrard, his time at Ibrox is almost certainly nearing its end whatever he decides during his long dark night of the soul.

If the dressing room hadn’t already been lost he made sure that it was with his petulant, self-aggrandising, arrogant interview last night.

The man who, for all his talents, never did win a league title constantly harangues his players for not having the mentality of winners; that’s bad enough, but he went miles beyond that here.

I cannot imagine how he keeps the squad on his side at this point.

His treatment of certain key players must have infuriated others in the dressing room.

He will not allow himself to accept that some of this might be his fault, and that means the constant blaming of others will go on and on and I watched their team yesterday and saw no effort at all … they have given up fighting for this guy and when that happens it is game over.

What a mess that club has gotten itself into here.

There must be people on the board who know that this project is shot but they cannot afford to bring it to a close. The cupboard is bare, as I’ll explore in greater detail tomorrow. But Gerrard knows this too, and he knows something else; he won’t get another gig, anywhere, is he’s seen as a quitter.

So fear and loathing are stalking through Ibrox once more. Gerrard hates the squad, certain elements of it hate him right back, the board can’t step in and deal with it and he’s almost certainly not going to walk. Where do you even start trying to fix that?

Thankfully none of us has to care; all we have to do is watch, and enjoy the show.

Popcorn sales are going up and jelly and ice cream are back on the menu.

Didn’t someone say recently that “the banter years are over”?