How Bad Is The Cash Shortage At Sevco? Even Tom English Sees The Writing On The Wall.

Today I finally got to write my Scottish football obituary for Dave King.

I was so busy with that article that the greater issues facing their club had to wait. I have been meaning to do a piece on the critical issues facing them for about a week; it will keep another couple of days. But for now, things over there are pretty bad.

If you’ve seen The Irishman, you’ll know that know that in mob circles they often talk in codes. “A little worried” means “very worried.”

When I say “pretty bad” in the context of Sevco’s finances I’m saying it in the way someone who’s survived a plane crash by clinging to a piece of wreckage, and finds himself in shark infested water looking at the growth of a major storm on the horizon might put it if someone was able to call him on his mobile at that moment and ask how he was doing.

Sevco is in real dire trouble, and you can tell even without having buried yourself in the accounts as myself and others have. You can tell when even the hacks are asking questions or portending doom. Tom English is the first to get out of the gate. 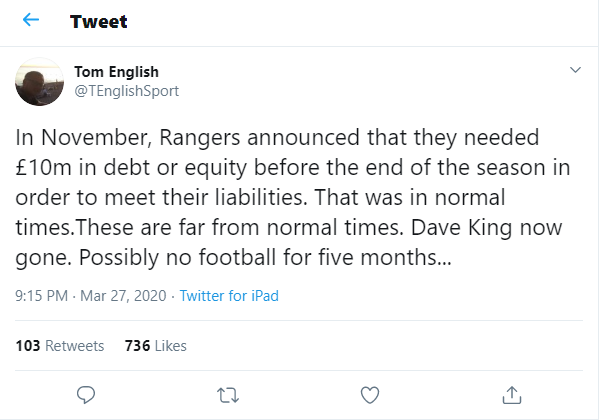 He will not be the last. Even our dreadful journalists can see this coming. Even they are starting to ask questions about the Ibrox club and how it intends to get through the next few months … and it may, of course, be even longer than that.

Phil has already flagged up doubts over their business interruption insurance; he did his piece on that some weeks ago where he pondered whether or not they had fully comprehensive coverage. As ever he doesn’t pose such questions lightly.

If Phil’s asking it’s because he knows the answer.

They are in real bother here, the kind that crushes teams like a used beer can.

English has the scent. Other hacks will be following up. Sevco’s new board has inherited a shambles and with the all-too predictable backtracking from the Asian investors already underway the club is facing an enormous cash shortfall in the short to medium term.

This crisis won’t nearly be over before that club hits the skids.

Administration at Ibrox is now almost certain. I think there’s even danger of them going to the wall. Mugs with money may still come along and keep them alive over the short term, but it’s going to take Absolute Mugs with Lots Of Money for it to help.

Sevco remains bombastic. They announced today that “significant investment” has already been received and that the club expects more.

But bigger problems than just meeting payroll are on their way.

Don’t forget to do our latest quiz on the Days That Rocked Celtic. You can find by clicking here.

Their new board can put off the day of destiny for a while, but not indefinitely. Their statement today shows that there are still lunatics running the asylum over there; they do not want to be straight with the fans because to do so might impact on season ticket sales. Would you buy a ticket for your club if they were facing severe austerity?

And there are other things going on behind the scenes, manoeuvres I’ll be writing about next.

Talks are being had which will alter the structure of the game here, and the regulations that underpin it. Fans should know about that stuff, and they will.