The Last Person Celtic Fans Want To Hear Bang On About Sporting Integrity Is Stewart Regan. 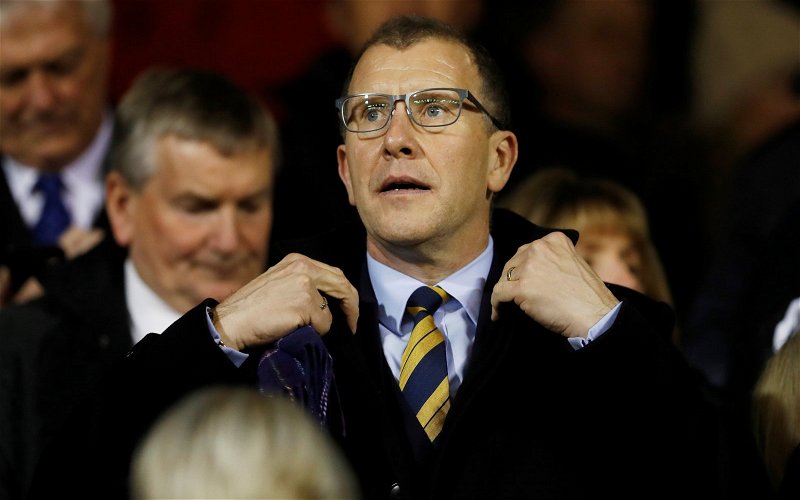 So last night, Stewart Regan stuck his two bobs worth into the debate over when and how to end the season.

If ever someone’s view ought to have been deliberately not sought it’s here, with this joker. He scuttled out of Scottish football with his pockets bulging, like a thief in the night, rewarded for leaving a train wreck behind him, after one screw-up too many.

His failure to appoint a proper national coach – he quit after failing to land Michael O’Neill – led us to the grim spectacle of Alex McLeish back in the dugout. We all know how that turned out. That would have been a toxic enough legacy for anyone, but he has a worse one.

Regan will be remembered as the guy who was willing to put sporting integrity into the nearest bin, the man whose behaviour the late, great, Turnbull Hutton described as “corrupt” on the very steps of Hampden. Not only did Regan know who, and what, Craig Whyte was and what he was up to many months before the club entered administration, but he made the governing body of Scottish football a willing participant in that scheme.

I have long wondered why those who sought financial redress from Ibrox didn’t point the legal guns, instead, at Hampden; they could have, easily.

It was not just a series of colossal failures of governance at Ibrox, it was a lamentable failure of oversight at the SFA too, and that’s my most generous interpretation. Regan was in that up to his neck, and he should have been shown the door for it at the very least.

Regan’s intervention here is ridiculous. He’s made the same demand as Sevco, that the league be played to the last game.

I think in the last week I’ve been able to judge someone’s engagement with the facts – and reality – here almost instantaneously by the way they answer the question as to how this should be dealt with in football; those who say that aren’t at the races at all, and their “opinions” can be safety filed under “ignore.”

I mean, it’s okay to be of the opinion that we should try to finish the season if we can, but to say that it has to be done, no matter when, no matter the disruption it causes, no matter the consequences for the football calendar or for clubs or fans … well, I am done arguing with those people. You can only do it so long without wanting to bang your head on the wall.

(The latest of them is Charlie Nicholas; this is the company these people keep.)

Regan’s comments are so ludicrous thought that they need to be read to be believed.

“The season is practically complete, we’re literally a few weeks away, and there is absolutely no reason – for the integrity of all competitions – that we can’t suspend competition, roll it on, and finish it when we can.”

No reason? Except for the global pandemic, right? Except for the knock on effects for clubs, players, fans, UEFA competitions, common sense … other than those, no reasons? You can see how Scottish football got into such a desperate mess under this idiot, right?

He appears not to understand the gravity of where we are right now.

“In Scotland, before my time, I had heard of the Highland League for example going weeks without games because of snow and ice. They don’t say ‘let’s just scrap the season’, they simply catch up when they can,” he said, perhaps ignoring that people are dying here, that this situation is unique, that it won’t last weeks but months.

How dare this man talk about the “integrity of all competitions” though? How dare this man use that phrase when he pushed to have a brand new club parachuted into the SPL and was willing to bully other clubs until they accepted it.

Let’s not forget that he tried to invoke the spectre of “civil unrest” at the same time … a despicable tactic.

The less we hear from people like this the better; the debate does not move on one iota with their contributions. He is a disgraced figure in the game here, a joke, a disgrace … and he ought to have kept himself well away from this debate.

This is an example of why we need the adults back in the room.