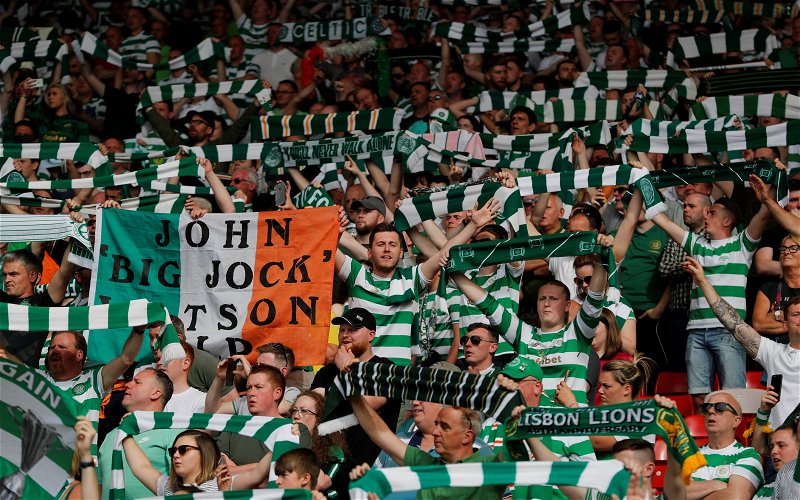 TalkSport is not a channel I’m ever going to listen to much.

It’s not a channel that I enjoy.

It is a channel that is too full of blowhards and eejits, and its Scottish coverage is particularly offensive because of how it panders to the lowest common denominator. It is “Old Firm” obsessed. It pushes so many of the toxic myths our game should be running from.

What I find most hard to take are the little “amusing anecdotes” about sectarianism and bigotry up here which English audiences doubtless view as quite bizarre.

The latest this morning was Alan Brazil laughing and joking with Ally McCoist about “Orange Clubs”, which led to a ridiculous tale, from McCoist, about how George Burley wouldn’t even eat Penguins from green wrappers.

I’ve heard stories like this a lot of the times down through the years – Andy Gray has a ton of them, each more disturbing than the last – including from members of the mainstream media who really ought to know better.

Hugh Keevins once wrote about being impressed by John Brown’s refusal to eat green jelly, and frankly I don’t know whose mentality that should hold up to a harsher light. Brown is a goon. What does that say about the hack?

The problems we have in Scottish football come from folk like this, and ingrained bitterness of this sort.

It is offensive to me when it is laughed off as a joke. McCoist said that Burley’s attitude “takes it too far” but never explores what “it” is … it’s the next thing he says that, to me, is the truly offensive bit though, and it wasn’t explored either.

What a grotesque statement.

But it’s also a truthful one although nobody ever points that out.

Because although I refuse to accept that the West of Scotland is some alien landscape this is a country that is yet to normalise itself to the presence of the Irish.

It is because of our proximity to one football club and a certain “culture”.

These jokes are a product of sectarianism … racism in fact.

Phil said to me today – and he’s right – that when these people are sniggering about banning Pepperami, or Jimmy Bell and green Jelly Babies, or the club itself banning green boots under Pedro Caixinha, it is actually an expression of anti-Irish racism.

It is grown men indulging one of the deepest forms of racism we still “allow.”

Phil has written about this extensively, both in his blog and in his excellent non-fiction book Minority Reporter.

When Phil was invited to the ChangeIn Scotland conference in 2011 – it is run by Gerry Hassan – he was asked to speak on the experience of second generation Irish identity in modern Scotland. He said this;

“Imagine my father was from Italy … imagine I was taken for long summer holidays in Italy, that I’ve only ever held an Italian passport, that when my wife and I were married we returned to Italy and that I speak the language fluidly … but if I had been brought up in the West of Scotland in the 50’s nobody would have said I was neither Italian nor that I had the right to consider myself that way … but subtract the word Italian for the word Irish …”

This is not about religion. This is about Irishness.

This is, as Phil once called it, the “last acceptable form of racism” and we have seen it expressed in a hundred ways in our lifetimes; take the scummy song The Famine Is Over, Why Don’t You Go Home? To which country? Ireland. Although it was the event that song talks about – An Gorta Mór, The Great Hunger – which founded the Irish community in Scotland.

If we lived we lived in Boston or New York, every March we’d be able to march in honour of St Patrick. Phil’s son attended one of the parades in South Korea. Glasgow must be the only city in the Anglosphere – and one of the only in the world – where you can’t.

Celtic was founded from that community; the secret is in the name. A combination of both nations, an integration of the best of Scotland and Ireland both. We didn’t, as our Edinburgh cousins did, call ourselves Glasgow Hibernian … we wanted to emphasise both.

Yet our colours have forever had the ability to wind people here up.

This is a huge problem.

It is still seen as socially acceptable.

When Mhairi Black, the brilliant, intelligent, liberal, working class, gay, left wing MP – pictured here swearing her oath to the British state – gave a mind-bending interview where she attacked “plastic Irishmen,” she was never asked to explain it by mainstream journalist save for the writers of The Irish Voice and a handful of others. This is not some weird quirk in the nature of people here.

It is something in the mind-set of some of the people here … or the Peepul if you want me to be blunt about it.

But it has become normalised in a way that is loathsome.

No, I didn’t find the “anecdote” funny in the least. Because it wasn’t an anecdote, it was a cautionary tale. It was a look into the darkness that still too much permeates our little corner of the world. It is nothing something any of us be laughing about.