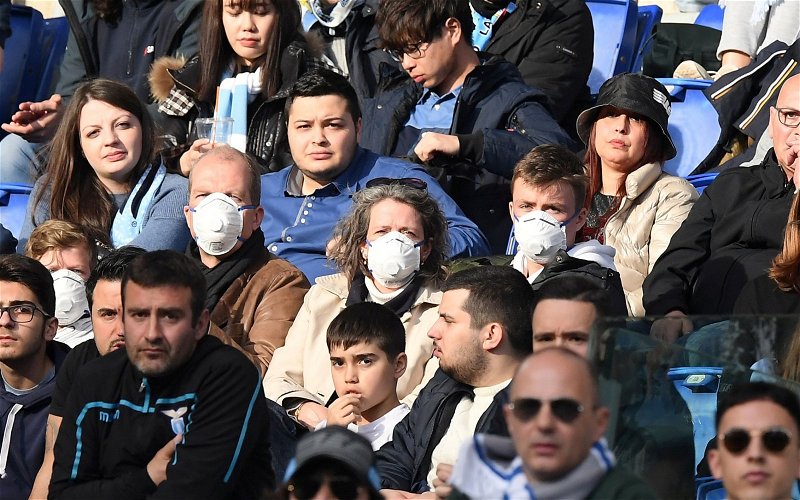 As this crisis continues to grip Scottish football, there are rumours that the early part of the coming campaign could take place in front of no fans, reduced attendances or stadium restrictions so severe that they will change the way we view going to grounds.

It would make sense for these changes to happen.

This thing is going to be with us until there’s an approved treatment or a vaccine; that could be 12 months away. Football cannot possibly sit still for that length of time.

Eventually we need to move forward, and everyone is going to have to give a little something for that to happen.

Masks seem the most likely, early, solution to getting fans back into grounds again.

They will not solve the problem entirely, and they do more to prevent you giving the virus to other people than they protect you from getting it, but if everyone has them on that will increase the chances of keeping this thing on the low threat level … provided we get the numbers down to begin with.

We’re still some ways from that.

But masks can do some good. At the very least they will make Sevco highlights on the telly much more tolerable.

Eyeballs have been known to bleed out at those quick “cut-to-crowd” shots.

The eight o’clock watershed can probably go as well.

On a serious note though, this is something that will probably have to happen.

Hand sanitiser, masks, all the safety precautions clubs can take … they will have to do it and fans are going to have to support it.

God knows what it will mean for attendances; they will be smaller for a while, that’s for damned sure.

Season ticket sales will fall through the floor unless clubs do something with their media channels which they’ve never yet done.

Celtic will survive this.

We will be less than what we are right now though.

We will be smaller for a time.

We will be forced into difficult choices.

But when you consider the state the rest of the game will be in by then we’ll be even powerful within our sphere of influence than we are now.

Especially when one considers that there might not be a club at Ibrox.

Oh yes, we might not need those masks to make BBC Scotland’s highlights more palatable.

There are enough problems over there to sink them like a stone.