Yesterday Celtic Trolled Sevco Brilliantly With A Social Media Double Dig Out On The Quest For Ten.

Our club’s social media team does not get enough credit at times.

I really mean that, and it’s a shame because they certainly do deserve more of it.

Yesterday they put out a cracking video of The Day We Stopped The Ten, and as if the inference wasn’t already clear they slipped a little dig underneath it; “Now that’s what you call a club statement.” 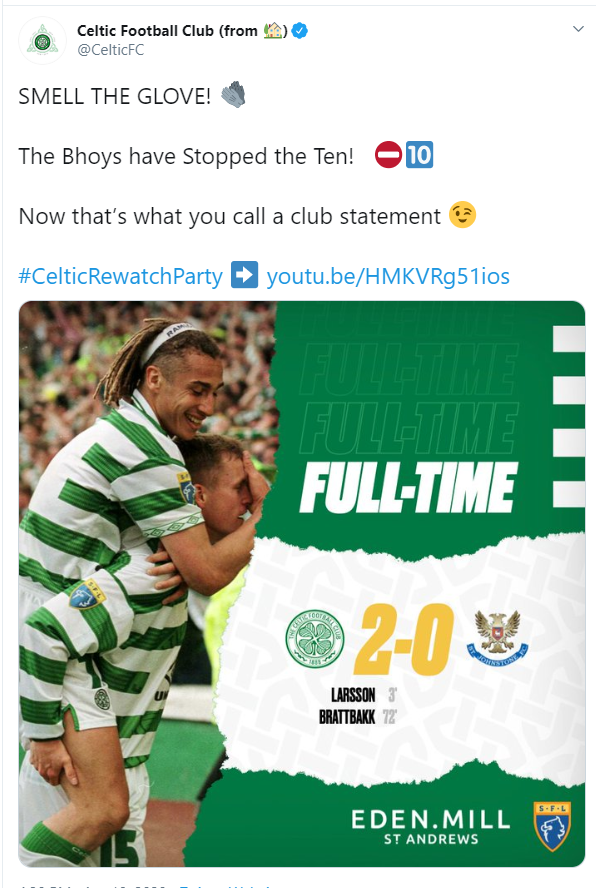 These guys are brilliant, and that is a superlative piece of trolling.

Sevco has made all of our weeks with their nonsense; it has been brilliant for guys in this business, being able to chart every awesome minute of their shameful and shameless behaviour. But let’s face it, it hasn’t been exactly subtle.

Our own board has kept its powder dry, but behind the scenes we’ve been pondering our response … and whilst this isn’t it I am glad we took the shot.

There are some of them who cling to the idea that because we stopped their ten that Fate will conspire to take ours from us … but it will not be like that at all. I keep meaning to explore this in more detail, in a lengthy article, but it will not be tonight.

The fact is, we were in a period of rebuilding at that time and we’d already made some good decisions. Our club was being put on the kind of footing that would allow it to be self-sustaining, and this was just at the moment when their ageing band of “superstars” were approaching the end of their best years.

We bought well, we thought well and more than anything else we brought in a manager who had no connection to any of the lunacy that surrounded Scottish football and who was there to oversee a project which might take years.

We know now that this was not to happen, but it didn’t have to.

Wim Jansen put in place some of the building blocks we’d be working with years later.

This was a guy who knew his business. Imagine he’d stayed?

In the moment, he was certainly able to get one over on the Ibrox management team of that moment and that included the Sainted Walter … people often forget that a Dutch manager, a daisy fresh rookie in the Scottish game, cleaned his clock when it counted most.

The Smith “reputation” is exactly that; a smokescreen on the bare facts.

Celtic’s media team knows that our situation is not the one that we faced when Rangers was going for ten in a row.

We have a sane, sound, management team and one that is not afflicted by any of that nonsensical 1980’s thinking that going out and getting pissed every night with your “team mates” is the way to build the right mentality … the game has moved on and even then it was apparent that Jansen had no time for that garbage.

I always thought that Fergus’ decision to go with a manager who didn’t care about the importance of the moment was a masterstroke.

Celtic, as a club, had a grander view.

McCann was trying to make us as good as we could be and whilst he understood that stopping ten was important he also knew that in order for us to succeed in the long term we had to take a long term view. This was one smart man; we’ve always been very lucky to have had him.

Celtic is getting ready to party. It will be a subdued party, because of the current circumstances, but you can bet that our nine in a row marketing campaign is already on the board and just needs the go order. You can bet, too, that the emphasis behind the whole of it will be on going for that magic number, the next one up, the record.

We’re going for it at a time when Sevco is a crumbling mess, virtually on its knees. The difference between where we were in 1997 – a club rising up from the ashes and rebuilding – and where they are now is where the real story lies … they have been reduced to hoping that a global virus stops us, because they have no idea how to.

And yesterday our social media team let them have it.