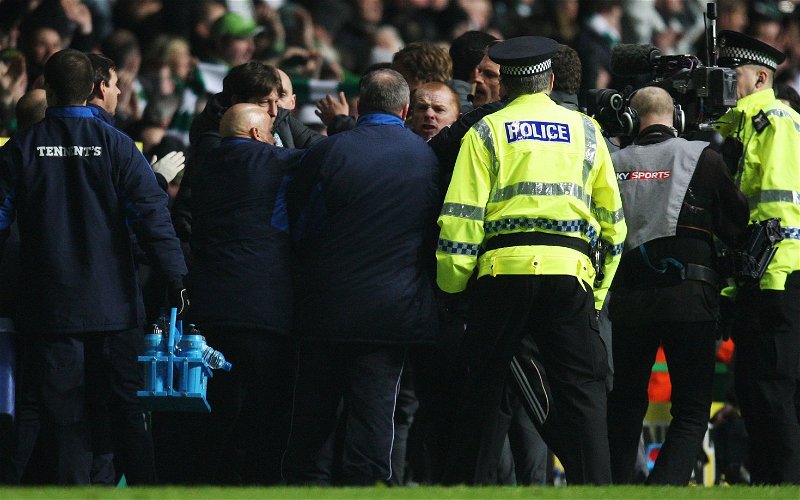 It was the touchline bust-up that provoked a hysterical reaction from Scotland’s political elite, and sparked a summit meeting.

No-one knows, to this day, what was said between Ally McCoist and Neil Lennon over that one, but of course our manager got the blame in the media although it was the Ibrox assistant whose face was contorted in snarling fury.

Lennon has claimed since that he said “Now wait just a minute …” and never got much further.

There are rumours galore about what the true message was.

But we’re never going to find out for sure.

What we do know is that nine years on the war is very much over and the rebels have won. Celtic has never looked back. The Ibrox operation never moved forward.

We’re in a different world now, and not just because of the global health emergency.

Lennon was to start, and now continues, the greatest period of one club dominance in the history of the Scottish game; I genuinely do believe that.

Neither Celtic during the first nine nor Rangers during the second ever won a double treble far less a treble treble and we stand here today on the cusp of two Scottish Cup ties which might make even more history. A quadruple treble.

Lennon has now won five titles as a manager to go with the five he won as a player.

McCoist flounders as a radio and TV personality, cut adrift from the game he loves, relegated to making inane comments on it.

He has never recovered from the disaster at Sevco.

McCoist exists on the margins of the game he believed he’d play a central role in.

He was never going to; he’s simply not good enough as a manager to succeed at the highest levels of the sport. I predicted when Sevco sacked him that he’d never manage a top flight club again, and that’s been right on the money so far and will be into the future.

Lennon on the other hand goes from strength to strength. McCoist’s TalkSport program is a joke.

Lennon is on the cusp of ten in a row, a cycle McCoist was there for the start of. I’ll explore his own contribution later on today.

When Sutton asked Lennon last night what he would whisper in McCoist’s ear now, in relation to the ex boss’s ridiculous asterisk remarks, Lenny shot back beautifully; “Stay off the Buckie,” he said. It is the perfect response to all those who would push that ludicrous line, but it must have felt especially sweet to direct it at that man who’s touchline behaviour so incensed Lennon all those many years ago.

If revenge is a dish best served cold, it came last night with a helping of green jelly.