The SPFL, Sevco’s Dossier, Neil Doncaster, Celtic And The Ibrox Mouse That Roared.

Prior to the events of the last month, it would have been unthinkable for anyone on a Celtic site to have offered Neil Doncaster much more than a token defence.

To paraphrase Tony Soprano, “If he was drowning I’d throw him a cinder block … but whack him over this?”

It is amazing to me that we’re in a position where we now have to defend that man.

Yet this is precisely the position Sevco and its media toadies have us in today, where Doncaster looks like the victim of a smear job simply for doing his job. That we are now having to offer aid and comfort to a guy who’s head I would have happily mounted on a spike outside Celtic Park every day for the past eight years is almost beyond belief.

But not only are we in that place, but it’s right and just that we are.

Doncaster does deserve our support this afternoon.

He has been wronged here, by a club pursuing a vicious agenda whose main objective is to cast a shadow on our on-field success.

Mark my words, this is more about Celtic than it is about anything else.

They have not even tried to disguise that.

Doncaster has been its target though, along with Rod McKenzie of Harper and McLeod, who just so happen to be Celtic’s solicitors as well.

In this Sevconuts see the Unseen Hand at work.

This is the level of their argument.

And it flows through the dodgy dossier which they published today amidst much media excitement.

Guess what? As this site and others confidently predicted, it contained nothing damning, except to those who pushed it with such enthusiasm.

How do we – in the blogosphere – do this so consistently?

How do we spot the distinct whiff of bullshit on so many Ibrox statements, even as the mainstream press lauds them?

Are our noses especially sensitive to the scent?

Or are we just willing to follow facts and logic wherever they go?

Are we willing to accept reality in a way the press here is not?

You just knew this was going to be pitiful, didn’t you? In fact, you just knew it would be so weak as to term it hilarious. Yet the hacks gave this their full-throated encouragement and support. The Daily Record has been the principle cheerleader.

This morning Keith Jackson had Sevco as the saviours of the whole game, as heroes sweeping in on their shining steeds to clean out the Aegean Stables once and for all.

Sevco. The bastard creation of Charles Green and Craig Whyte.

A club never out of court.

A club whose last chairman was a convicted tax fraudster who was cold shouldered whilst in office, and who’s successor couldn’t wait to start firing out his own deranged and deluded statements.

The portrayal of them as crusading white knights was sickening.

It was also laugh out loud funny, which is the only response to something so nonsensical.

Reading that this morning, I was reminded of the fine Cold War era novel The Mouse That Roared, about a tiny country that declares war on the United States, expecting to lose and thus reap the “benefits” of American aid to those it has defeated.

It’s not the basic scenario which rings the bell of recognition, but the end; the tiny country accidently captures a “doomsday weapon” which forces the United States to “surrender” to them. And then, when the treaty ceremony has ended, the inventor of the device accidently drops it and finds out that it was a dud all the time.

In the movie that was made of the book, the bomb cracks open and a little mouse pops its head out.

And I think Sevco’s entire scheme here has been a bluff, much like that which the tiny Duchy Of Grand Fenwick tries to run on the United States.

Amazingly, the book contains at least one item right out of the last four weeks; their “declaration of war” gets sent to Washington, but winds up lost amidst all the other clutter at the State Department, and so the US is “invaded” – by a dozy field marshal, three “men at arms” and twenty archers – without even knowing it’s at war.

I don’t know what Sevco hoped would happen with their bluff, but when Doncaster went on the radio at the weekend just past they must have known he wasn’t going to be spooked into standing down. Whatever crazy scheme they had cooked up inside Ibrox, it was shot the moment clubs agreed to wait and see what evidence they had.

One of those clubs – Motherwell, via its director Andrew Wilson posted – a scathing response on Twitter this evening, and you’ll see why The Mouse That Roared, and the ending of the movie in particular, came so readily to mind; 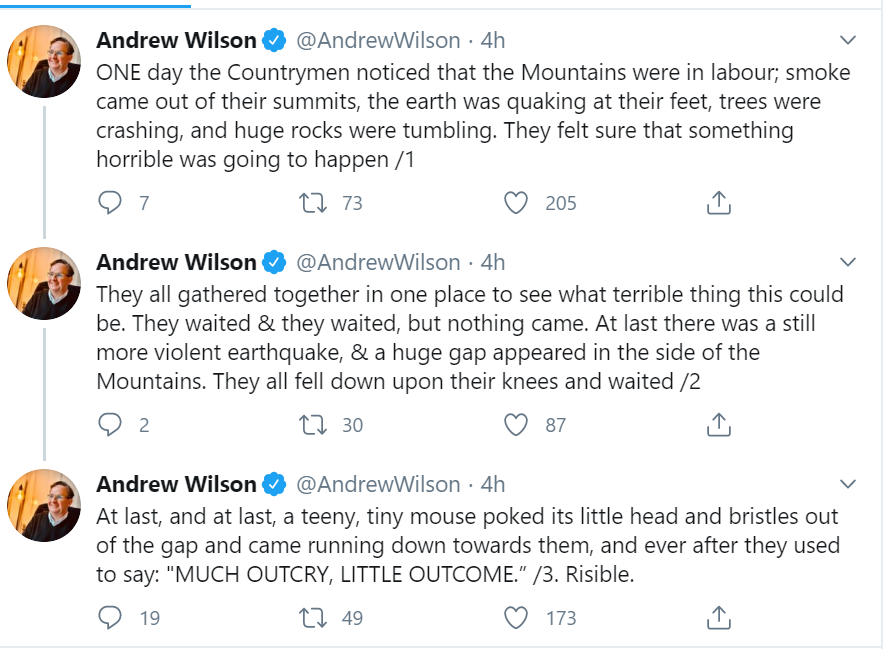 This is what the media has spent weeks obsessing over. There are no “heroes” here, no matter what Keith Jackson might have believed this morning, and although Gary Ralston is still putting a brave face on it and some of the Sevco fan sites are trying to convince themselves that their club has not just suffered a total humiliation, most of the hacks should be embarrassed tonight by the way they’ve made much ado about nothing here, on Ibrox’ behalf.

A handful of course – like Michael Stewart – were never convinced and have already spoken to directors at clubs who are equally scathing.

They are the holdouts.

They are the sensible folk.

The rest should be hanging their heads or finding beds to hide under. 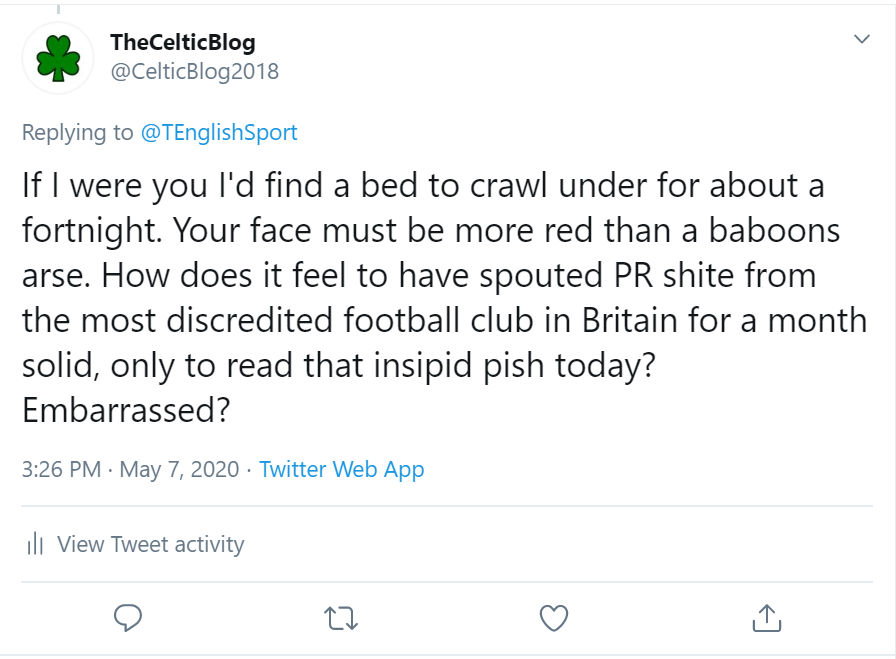 Celtic, of course, will not offer a comment unless it is to confirm that we intend to vote against Sevco’s call for an “independent investigation” into their bizarre allegations.

That is good and proper.

We ought not to even dignify this idiocy with a statement.

The mainstream press has already given it more credibility than it ever deserved.

To read the best dissection so far of this ridiculous dossier, Paul Brennan’s piece on CQN today is a must-read that will take some beating.

You can read it here.