Keith Jackson has an embarrassing history with how he’s responded to the global health crisis.

He probably doesn’t like to be reminded of it, but in light of what he’s written today I feel no compunction whatsoever about doing just that.

When this thing started to get serious in the UK, and long after it was being taken seriously elsewhere with the death toll rising fast in Spain, Italy and China, Jackson tweeted this. 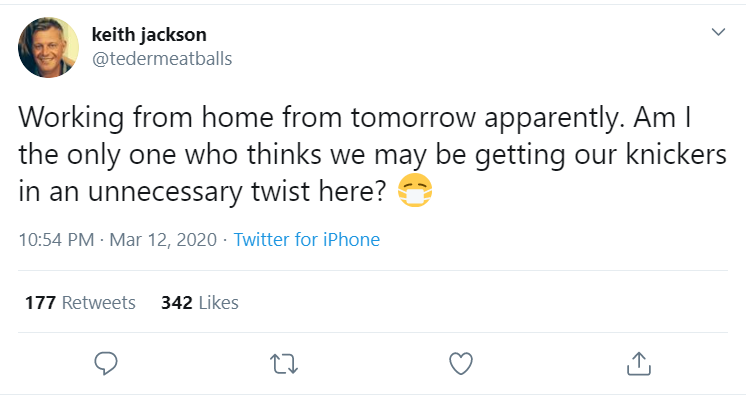 After a firestorm of social media fury, where he lamented the “surprisingly angry response” he mustered up a half-hearted effort at backtracking. 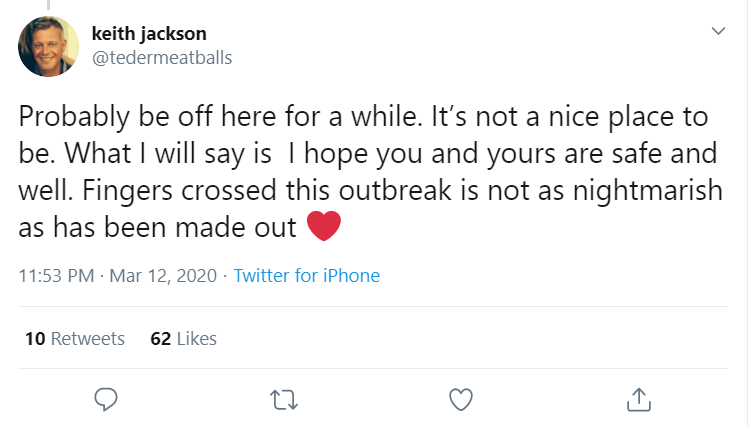 Finally, when that didn’t work he went into all-out apology mode. 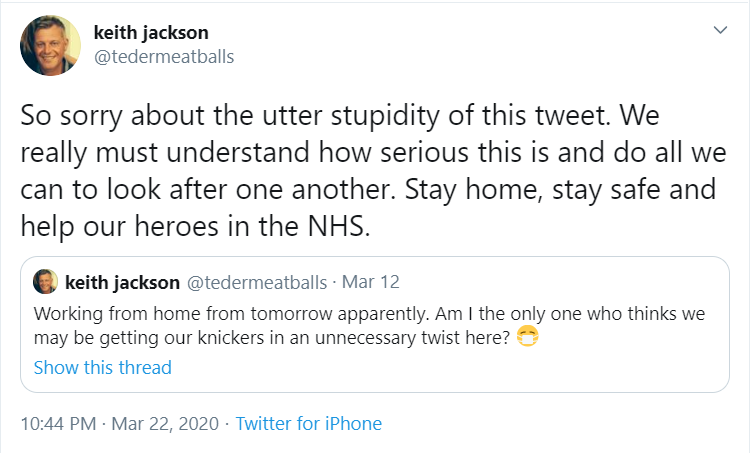 Since then he scorned the SPFL and the Scottish government several times for their wholly rational response to this crisis … and then there was today.

His column in The Record today is a shocker.

I’m going to give you the opening line – a lame pun in the worst possible taste – and let you make up your own mind about whether or not he’s gone off the deep end, or if he’s just a scumbag who never really abandoned his tinfoil hat belief that this is all over-stated.

“The time has come to wash our hands of this coronavirus horror show,” he writes, as if we could just decide, like someone swimming up from a dream, that this was all just a nightmare and snap out of it. As if 50,000 dead in this country was a phantom figure and didn’t represent real lives ended and real families devastated.

I know because mine has been one of them; I lost my uncle to this a month ago.

I am in no mood to read Jackson dismissing this thing as if it were a minor matter which has somehow become a major inconvenience.

One more time, for the thick as mince or the deluded; this thing kills ten times more people than seasonal flu and spreads more easily.

One in five people who gets it ends up in hospital. If you’re sent to the ICU in Britain you have a 50/50 chance of not coming out.

Even those who do report horrendous health problems continuing for months.

This is real. This is deadly.

This could overwhelm the health service in no time at all, and some fear it will do exactly that when the summer starts to fade … right around the time this clown wants tens of thousands of people crowding into football stands.

In the very next line, betraying his impatience, he asks that those in the game “return to some sort of normality and perhaps even challenge the idea that Scottish football will have no choice but to open up behind closed doors when the new season begins in August.”

What a yahoo this guy is.

It barely needs pointing out that the decision will not be made within football but by the governments in Holyrood and Westminster both, neither of whom currently supports allowing tens of thousands of people inside football grounds.

And for what? So he can pretend to be relevant again just because he gets free match tickets for the press box, where he absolutely does not belong.

“The great escape from this pandemic is gathering pace all around,” he writes next, which is absolutely at odds with what every reputable scientist on the planet has said, time after time. “Yesterday Prime Minister Boris Johnston ordered a review of the two-metre social distancing rule in a move that could be a potential game changer where spectator sport in this country is concerned.”

Yes, Johnson did because that rule is at odds with WTO advice that says one metre might be enough.

But the same organisation also cautioned, just yesterday, about lifting the lockdown any further at the moment because they know what this idiot apparently remains blissfully unaware of; that this thing isn’t over, that it isn’t nearly over, that there will be no “great escape” as this eejit casually suggests, and that we’ll be living with this for a while yet.

For at least the rest of this year, and probably for longer.

“When this all began the perceived logic of those in charge of the national game was that professional football would be unlikely to begin this side of August anywhere in the UK,” he snarks, having a clear go at the SPFL. He clearly doesn’t want to acknowledge that if the game hadn’t taken this decision that the government was getting ready to … and current regulations would not have allowed the games to kick-off before August anyway.

He continues, roping the Italians and Germans and French into his “vision” of games being played and grounds slowly filling up; perhaps he’s missed that all those countries locked down far earlier than we did and that all have correspondingly lower deaths as a result … or maybe he doesn’t want to acknowledge that because it doesn’t quite suit his agenda.

None of those countries, by the way, is going to rush into having fans back … and none of this even takes into account what happens if we have a second wave of this thing, which almost everyone agrees is a stonewall certainty.

Read this line; “With Hibs and Hearts in discussions with the SRU about using the home of rugby as a bio-secure hub, the possibility for them to unlock enormous amounts of match day revenue appears to be a great deal more realistic than previously anticipated.”

Scottish Rugby will have to adhere to the same laws as the rest of the country, and social distancing with spectators is only possible for Hearts and Hibs at that ground as their average attendances are less than a quarter of what Murrayfield holds … you could space people out every four seats.

But concourses would be packed regardless.

When a goal is scored how do you stop fans from breaching social distancing to celebrate?

You don’t have to be a genius to see how this could get very complicated and very out of control very fast.

Honestly, all of us want to have this crisis over with.

All of us are missing things from our lives.

But some of us have already lost enough and have no wish to see further risks taken or further lives put on the line.

Jackson doesn’t seem to care about any of that. In his own “unseemly rush” to get “back to normality” he is content to ignore the science, refute the logic behind it and urges that football expose people to a high level of risk.

I’ll put this as bluntly as I can; if we listened to halfwits like this a lot more people would die.

If we do what he suggests a lot more people will.

This is the kind of ranting nonsense you’d expect to find on a conspiracy theorists blog and not in a national newspaper.

There are times when this fool is better off ignored; this is not one of them.

This is not just nonsense, it is dangerous nonsense, and his editors should be ashamed of letting it go to print.