Sevco Is Marked For Death Because It Will Not And Perhaps Cannot Change Its Ideology. 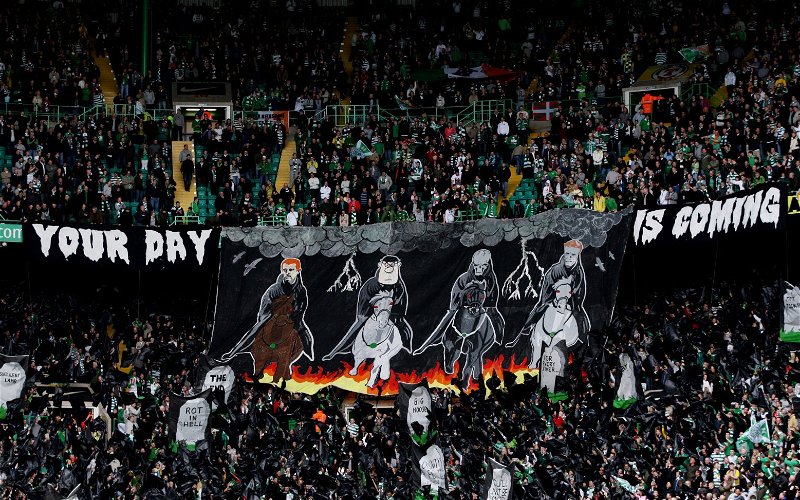 The news, last week, that Sevco had forced one of its own supporters to apologise for taking an anti-racism stance and suggesting that the club itself needs to do much more to change the culture within its walls was not in the least bit surprising.

It came amidst that individual being subjected to social media opprobrium as if he had committed a ghastly crime, instead of merely stating what most of us are already well aware; there are serious issues at Ibrox in how that club deals with inclusiveness, and those issues are not being confronted in any realistic fashion.

This is not an oversight.

But I want to make a couple of points separate to it, about the way in which this stuff should embarrass them but doesn’t.

Sevco continues to struggle with a lamentable public image, and it’s not because they don’t have a clear understanding of how they are perceived by the rest of the world. It’s because they pander so much to a bigoted element within their support that they can’t challenge that perception any longer.

To do so would court problems they don’t want.

No club in Britain that I’m aware of has so successfully, and skilfully, weaponised the lunatic element of their own support in quite the way the one at Ibrox has. They know how to turn that support against those outside forces which stand in their way of the “success” they believe they are due. But this has a deadly flip-side; their support is so ready to man the barricades and so willing to use aggressive tactics that the board at Ibrox is terrified of them.

Sevco’s board are like a guy who makes the macho purchase of a vicious dog but quickly realises that he has no control over the animal whatsoever. What he’s got on hands is something fully capable of savaging a neighbour and bringing the attendant scrutiny of the authorities and on top of that is just as likely to turn on him without the slightest warning.

What’s just as dangerous is that Sevco is overly dependent on these lunatics for money. Indeed, their very survival as a club depends on keeping these Peepul sweet. This is the reason that successive boards at Ibrox have pandered to them instead of tackling them.

That has consequences, With the kind of results for the club itself and our society as a whole that you can see today in George Square.

That was The Peepul there in all their glory, and that fact should not be missed by any sane person.

Sevco is stuck with this stuff, and all the damage that it does to them.

Even if their board of directors was minded to, I don’t think they could easily change this now. This has become such a part of what the club is, and as I’ll explore in the larger piece during this week it’s largely their own fault because this is what they’ve encouraged for years.

The Ibrox operation has always been identified with a certain “culture”, and the modern world has always been moving in a different direction from them. A sensible board of directors would realise that and be trying to move them away from it, but instead they have tied themselves ever tighter to it until now club and support are locked in a death grip.

I use that term literally, because the “culture” they are built around is dying.

Its members believe it is dying because Scottish society wants to destroy it; in part they are correct, just not to the extent they believe. There is no conspiracy against them, just an almost universal disgust at their backward and bigoted nature, and it’s something most people want no part of.

And yes, that does create social and political pressures to end the practice of letting thousands of them display their bigotry in an annual festival of hate. It stirs public opinion to oppose manifestations of sectarianism, on which their supremacist culture is based.

Yet it’s their response to that which does the most damage, and reminds people that the detritus of empire, of the past this country won’t confront, is something we’re better off without. It shows them unionism with the mask off and has hardened opinion that this is something better left behind … and so has forced many inexorably towards independence.

For Sevco fans, this is all the more difficult to accept because they watched the death of Rangers, and then watched as their new side struggled up through the divisions only to be utterly humiliated once they arrived in the top flight. In 2012, they had fully expected Scottish society to rally to their aid, and when aid did not come they birthed the first great conspiracy theory; that Scottish society hated them for their success and turned on them at a moment of weakness.

The truth was much simpler.

Their club had set itself apart from the rest, assumed a mantle of superiority, and so ostracised those who lay out-with it that nobody cared if they died or not. Indeed, some of us were positively keen to see them brought low … but we played no part in doing it.

Their own hubris, greed and a complete lack of self-awareness is what brought them low.

Nothing has changed from one Ibrox club to the other except this; they are even more bitter, angry, paranoid and delusion than they ever were before. They see not only Celtic in the ascendency but the independence movement they thought had been crushed in the referendum resurgent, with total dominance over the political landscape … and they’ve convinced themselves that all of this is the doing of dark forces, instead of the steady pace of change.

What we saw in George Square today was the ultimate in helpless rage. Helpless because they see more proof that the world is moving in a direction not of their liking; they are correct about that too. Things are changing … and a smart organisation would be changing with it. Celtic has never had any problem embracing that … but then we’re not tied to a backward ideology, one that is slowly ebbing away, or those who follow it.

This is their curse … and paradoxically, the only thing keeping them alive. That will not save them in the long term, perhaps not even in the short term. It’s a new world, and in that world it’s adapt and change or die. They seem determined to carry on regardless.