The Sevco Fan Forums Have Become Sewers Of The Far Right. That’s A Big Problem For Them. 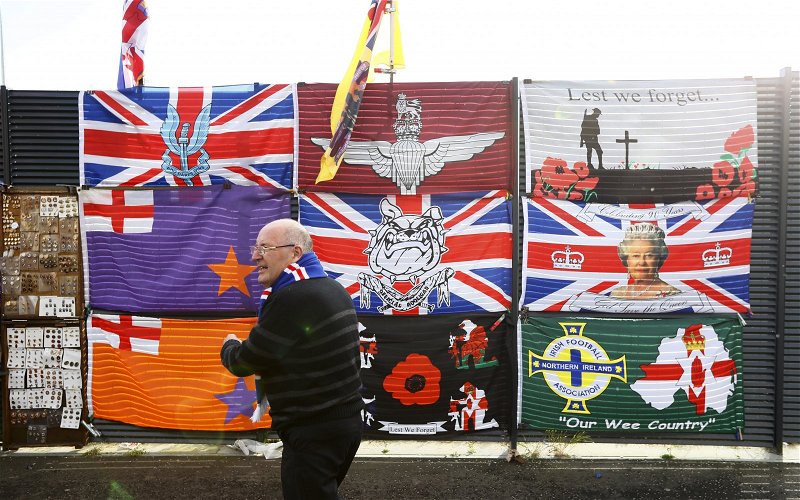 If you’re watching one of the 24 hour news stations right now then you know things are ugly.

Ugly is the only word for it when the full screen is filled with a shaven headed, beer gutted yob in a football top holding a brick in one hand and a cider bottle in the other, and preparing to pelt the police for some reason or another.

Ugly, yes, but although middle England may be horrified at the sight of it, in Scotland, and in Glasgow in particular, we’ve seen it all before.

For weeks every July and at sporadic intervals all during the year the Pride of the Empire is displaying its full plumage and what a sight to see it actually is.

The kind that makes you despair for humanity until you realise that these Peepul are a dwindling minority, one that finds it increasingly hard to sustain itself.

I used to believe that as a society we’d educate ourselves out of this. But in the last few years we’ve seen Brexit, Trump and Johnson.

We’ve seen the far right get a greater foot hold in some parts of our society and culture than ever before.

And football is particularly exposed to this, and even here in Scotland.

Two clubs have a serious problem with this; Hearts and Sevco.

Perversely, when you consider the history of this issue, over the last few years it’s been the Tynecastle club who got the truly grim headlines. That’s because the far-right is pretty relaxed about wanting to get a foothold at that club, and it has advertised that fact extensively. This has caused serious friction within the fan-base, as a lot of their supporters want nothing to do with the gutter trash of the EDL and their little off-shoots.

And you know what? I’m going to play fair here and point out that most Sevco fans want nothing to do with these morons either, the kind of people who are standing in front of Churchill’s statue today and making Nazi salutes in his honour.

I mean, really, who would want to be associated with these dregs of humanity?

More Sevco and Hearts fans than you might want to think. More than their smarter and more socially responsible supporters might want to admit.

The Sevco forums have become a real breeding ground for this type of mentality.

There are so many threads referencing the Black Lives Matter campaign and calling on the police to crack down on the demonstrators. This is the kind of stuff you expect to hear from the more deranged members of the Trump administration, not from football fans in Scotland.

But it’s part of a familiar pattern, and it’s one of the things I want to cover in my big piece on Sevco and its bigotry problem over the course of the weekend. The club has grown a far-right, militaristic, pro-union and even Loyalist mentality amongst those fans … their supporter’s organisations are filled to the rafters with these Peepul.

The Black Lives Matter protests have shown sections of the Sevco support in the harshest possible light.

Their support for barmy, right-wing causes has always been evident and always been on display, contained in their hatred of Scotland and its government and their bizarre political outlook, which is totally at odds with reality … but it’s never been as vicious as it is now.

Nor has it ever been quite so deranged; here is a group of them standing guard over the cenotaph in George Square, a place which is of no interest to either Black Lives Matter or antifascist protesters; unlike some people, anti-fascists are wholly aware of who the enemy was in the Second World War and would not be seen dead making Nazi salutes. 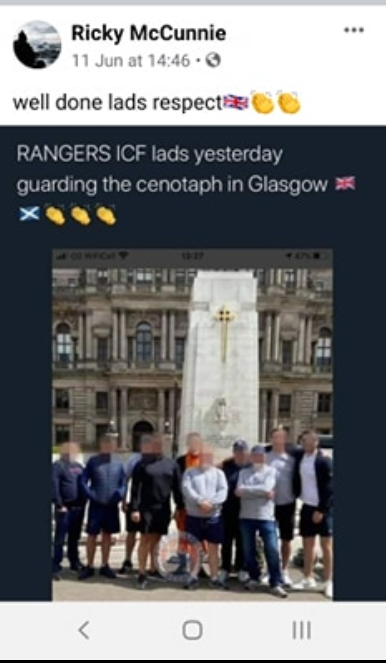 I have a hunch that not everyone in that picture can say the same.

Maybe I’m just viewing it wrong. Maybe there is a demented kind of brilliance in protecting a monument that no-one is interested in defacing … maybe I’m just not intelligent enough to grasp what the point of it is, but there they were doing it, and they got a lot of praise for it too, all across Sevco social media.

But you cannot sustain a thing on hate, especially when the next generation is going to view your intolerance with disgust.

Sevco is dying. I’ll explore in more detail tomorrow, but it’s a fact and most sane people can see it clearly.

Their support is as backward and bigoted as it has ever been. I know Sevco fans who will deny this, but there is a spreading cancer amongst their ranks that is too virulent and dangerous to ignore, and in my opinion that’s what they are doing.

To their great detriment. At their own peril. And to a huge and coming cost.