Why Black Lives Matter Matters To Celtic Fans. Or Why It Should, Anyway. 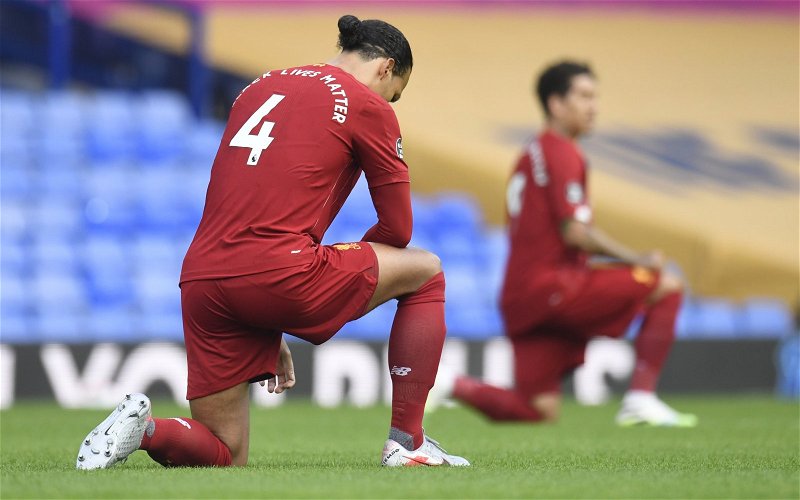 He has said today that when this coming campaign opens, on the first day of the new season, every player, of every club, should take a knee for the Black Lives Matter campaign.

And I agree with him wholeheartedly.

There will be objections, of course; if someone wants to come out on a point of principle and say they disagree either with the sentiment or the campaign itself, that person should be able to opt out.

And since the papers are ever fond of demanding that James McLean explain himself on the poppy – in spite of doing so a hundred times – I hope they’ll show the same keenness here to stick their microphones in the faces of everyone who does so.

It will be good to know who in Scottish football belongs in a hood and a bedsheet instead of a football shirt.

I have no problem with someone wearing his or her politics on their sleeve.

We live in a free country after all, where the freedom to behave like a bigot is enshrined in the law. We also live in a world where citizens of the freest country in the world are routinely murdered by law enforcement officials for the colour of their skin.

We in the Celtic support understand bigotry. Or some of us do. I find the reaction by some amongst our ranks, both to Defoe’s comments and to the Black Lives Matter campaign in the main, as ignorant and abhorrent as some of what I’ve read on the forums of Sevconia.

The number of “White Lives Matter” goons I’ve had to block this week is bad enough … but I find the “All Lives Matter” slogan to be, in its way, far worse … to me it’s a more acceptable way of saying the same thing, of making the same point.

Or missing it altogether, which I think is a more generous interpretation than some of those hiding behind it are entitled to.

Let me tell you why this matters, and why I am so passionate an advocate of it. I like to study history and I know that every degrading act that was inflicted on African Americans has been inflicted on the Irish, all but that most savage of all acts, the enormous crime of slavery.

Every form of discrimination black Americans face has, likewise, been visited upon our own.

Think about it; from electoral disenfranchisement, all the way up to the cold blooded murder of our citizens by the agents of the state … you cannot understand the history of Ireland and the Irish people without having at least some understanding of what black Americans go through every single day, and it’s not just those who live in the United States either of course.

Britain is a racist country.

There is a nasty undercurrent of it which has always run like a river just beneath our society.

Look, it’s built into the firmament, and its roots in Unionism is one of the reasons I want this country to be independent so we can erase it from the social structure once and for all.

Every major institution in this nation is run by men – for it is nearly always men – of a starkly similar pigment.

The key pieces of what we would call the Establishment are white, from the monarchy to the bench.

The Union itself is built on bigotry.

The outreaching tentacles of it, Loyalism, Orangeism, freemasonry … how many coloured faces do you see marching on 12 July?

You may think we never practiced any form of segregation here, but you’re wrong.

Do you know how hard it was to get a job if you went to a Catholic school back in the day? They had to abolish the education question on employment forms; how exactly do you hide the colour of your skin?

Every disadvantage we’ve suffered, I assure you, minority communities have had it far worse.

If you’re sympathetic to one cause and not the other, then I’d suggest you were paying lip service to the idea of it rather than lending it your genuine support.

Growing up in the United States as a black male bears an unmistakeable resemblance to what it was like for many growing up as Catholics in the North of Ireland.

Racist murders were not confined to the hooded psychopaths of the Deep South.

Our people know all about them too.

What do you see when you look at those July bonfires?

I see the same thing the black community sees when it looks at the burning cross.

I see hatred unleashed, I see the diseased mind-set that linked Billy Fullerton’s sectarianism to his devotion to the Ku Klux Klan.

The mind-set is the same. The motivations are identical. There is no difference, to me, between a goon wrapped in a Union Jack shouting about fenian bastards and a hillbilly Trump supporter wearing the General Lee around his shoulders like some shit-kicker superhero.

Odds are, he’ll have an All Lives Matter t-shirt on as well, to really set the scene.

In Ireland they could, conveniently, blame many of the crimes of the Security Forces on Loyalist paramilitary organisations, though sometimes that unravelled spectacularly and is now a matter of public record. There are a lot of stories like that.

Ask who Aiden McAnespie is … almost every one of our fans could tell you.

But I bet a lot of our supporters could also tell you the story of the Miami Showband. I bet some know the names of Sean Farmer and Colin McCartney and how they died. I bet some could even tell you who the Reavey family were and what happened on 17 May 1974 … one of the worst crimes in the history of the Troubles … all these atrocities carried out in a two-year period, by the same band of state backed thugs, in what was known as the Murder Triangle.

Black America had its Bloody Sunday before Ireland did, and it was during a civil rights march too.

White police, backed up by specially deputised red-neck citizens, set upon a group of protestors trying to cross the Edmund Pettus Bridge in Selma, Alabama. Nobody died, but it brought home the reality of racism into millions of American living rooms for the first time.

Honest to God, I have had these same arguments down through the years with Celtic fans who have held some of the most reactionary views imaginable on immigrants too. I’ve lost count of the number of folk I’ve had to delete and block over their support for organisations like Britain First, as if everything about the very name of them didn’t make your skin crawl.

I don’t mind that some of them don’t know their history, I do mind that they believe they can post the most blatant ignorance and bigotry without recognising that’s what it is. But accuse them of being sectarian and they claim not to know what you mean.

So I’m with Defoe on this one.

This isn’t about one notorious crime, the murder of one man, it’s about a greater historical crime and the way some countries which were involved in its perpetration have never fully faced up to and accepted it. Black America continues to suffer, and I’ve heard all the bullshit arguments about how their male youths continue to kill each other in large numbers in the drug wars; that isn’t the goddamned point, and those making that argument know it.

This is about the state murdering the citizenry on account of their skin colour.

It’s about being black in a country where that makes you more likely to go to prison than college.

It’s not only about death on the streets at the hands of the police, it’s about how so many black lives are seen as disposable, as worth less than a white life.

It’s not to say that other lives don’t matter, it’s a cry for help and a cry of anger, at a very specific time in our social history.

And I hear it, and a lot of people hear it, but more importantly we should understand it and embrace it because in a very real sense we’ve been where they are.

Our backgrounds, our family histories, our experiences of life as Catholic or Irish (or Irish Catholic) on these islands, even in this city, remind us every day, that for some we’re barely tolerated outsiders, even though this is home.

Imagine for a second you had to wear your colours where you couldn’t hide them.

Now give them guns and all the backing of the state to use them as they see fit.

How long would you still feel safe?

Still not getting it?

Still not seeing it?

Is it still not getting through?

The clue is in the name; it’s so-called because for too long, and for too many, they didn’t matter at all.

If you think that an acceptable retort to that is that all lives matter, you’re doing the job of the bigots who would strip this campaign of any meaning at all.

If your retort to it is that white lives matter, then you are a bigot.

And you may think that’s compatible with being a Celtic supporter, but I reckon you are definitely wearing the wrong colours and following the wrong club.

As a lot of our guys are music lovers, I’m going to leave you with a “rebel song” … maybe this’ll do it.