Celtic Fans Love Great Players, But Neymar Makes That Impossible To Do. 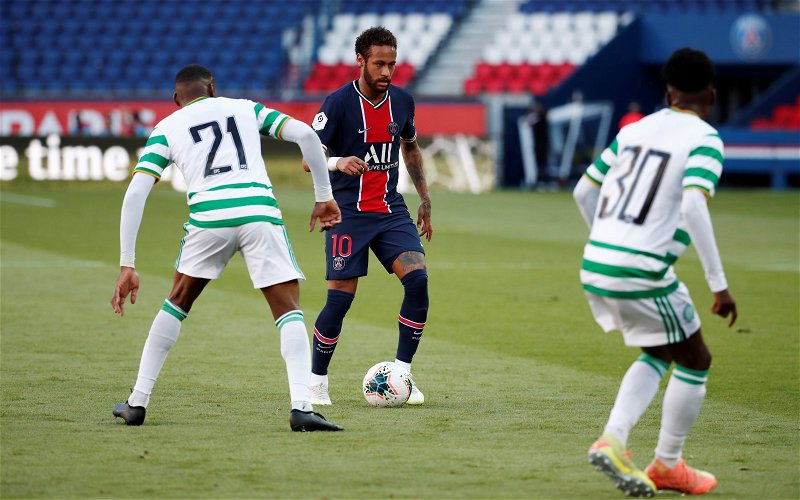 Yesterday Neil Lennon stood on the touchline at one point in the PSG game and barracked their Brazilian boy wonder Neymar. I like to think he was telling him “you’ll never play for Celtic whilst I’m manager!” That would have got the message across.

Celtic fans as a whole were angry with the little runt for a performance which, typically, was full of snarks and little off-the-ball kicks. Lennon accused him of being “infuriating.” I am guessing that was the post-watershed way of putting it.

I’ve said in previous articles on this guy that Celtic fans should love him. We really should. We have always been able to appreciate beautiful football, and he is capable of playing it. But few other players in the game can simultaneously rise to his peak or sink to his level. He plays the game as if it’s every game is a grudge match. He is not likeable.

Indeed, Neymar makes the simple matter of having professional respect for a quality player nearly impossible to do. I have watched him and wanted to enjoy the experience but found it impossible because of the way he conducts himself during games.

How many times has he done this against us now? Plenty. But he does it against every side he faces; Neymar is an equal opportunity cheat.

Part of it is frustration. This guy is one of the most talented footballers on earth, and he thinks he’s the greatest of the present day.

Yet this has never been the case.

At Barcelona he was completely overshadowed by the genius Messi. One of the reasons he left the Spanish giants was to escape from the Argentine’s shadow.

Yet at PSG he arrived at the same time as Mbappe … who is a phenomenal footballer and the darling of Paris. Indeed, it would be odd if he wasn’t, as he was born there. His signing felt to many like a homecoming, and that’s how he treated it himself. Neymar can never hope to have that relationship with the club or the fans.

It is easy to see why Neymar often looks fed up and on edge all the time. He has always wanted to be the star on the stage, but it never seems to happen for him. This offers an explanation perhaps; it does not offer an excuse. Neymar does not inspire that kind of sympathy.

Celtic supporters have applauded players who have destroyed us.

We have never applauded one who cheated us, and he has done that a few times as well.

He makes it impossible to simply admire him for the skills he has and which he can demonstrate with such fluency and class.

He is one of the greatest footballers of his age … but awful to watch at times.

Lennon was right to have a go at him, but the player doesn’t care.

I don’t think he’d change his attitude even if he could.

It’s why he’ll never be respected or loved.