Celtic Has Shattered Sevco’s Hopes Of Being A Major Force. This Is Why They Are Celebrating A Friendly Cup Win. 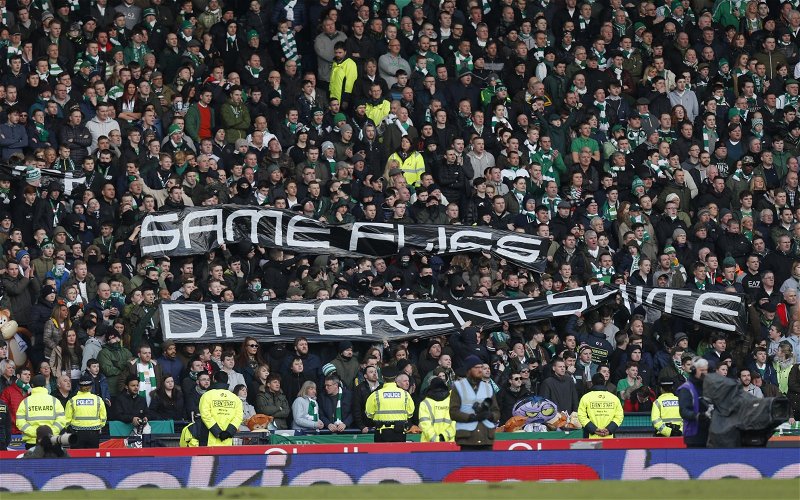 In his famous political essay, The Eighteenth Brumaire of Louis Napoleon, Karl Marx amplified Hegel’s theorem that historical events and figures repeat; what Hegel meant is that there are echoes of past events and past personalities in future events and persons.

What Marx added turned it into one of his most famous quotes; that history repeats itself “first as tragedy and then as farce.”

I think about that a lot when thinking about Sevco.

Because what Sevco is trying to do is repeat the “success” of Rangers, only with fewer resources at their disposal and in a world where things are radically different than they were in the 90’s, at the height of Ibrox’s pomp and glory.

Yet amidst all the “success” Rangers enjoyed in that time, the seeds of their doom were being sewn.

Rangers was a failure. That’s why Rangers died.

That Sevco wears the colours of that club and bears its name – in the way Louis Napoleon tried to walk in the shoes of his renowned uncle – only shines an ever harsher light on where they find themselves at the current time.

Sevco is a joke; no matter what we may have thought of Rangers, they were never that.

We didn’t call the O’Neill era or Strachan’s three titles in a row The Banter Years; the eight years of Sevco’s pitiful existence have that title all to themselves.

When Sevco falls, it will fall as a club whose “finest hours” were in the tradition of Scotland’s “glorious failures”; the Scottish Cup Final of 2016 and the League Cup Final of 2019.

In the first they came back from a goal down to take the lead and must have thought their moment had come.

In the second, they got a penalty with Celtic down to ten men and couldn’t take advantage.

Sevco is a farcical club and that has never been clearer than it was yesterday when their fans and their manager and their players celebrated a “trophy” victory, for two wins against skeleton sides in a pre-season friendly “tournament.”

This is absolutely ludicrous.

It’s as if they’ve stumbled into self-parody. They have become so devoid of awareness that they cannot comprehend that the rest of the world is laughing at them, and at how narrow their horizon is and how low their standards are set.

Those of an Ibrox persuasion have somehow convinced themselves that this has broken some sort of spell, that it has “given the players a taste of silverware.”

The only difference between this and the similarly nonsensical flight of fancy of two years ago was that they didn’t win the Florida Mickey Mouse Trophy but finished third; if this is silverware then Chris Sutton is right.

They really should put it next to the “Petroltank Cup” with pride.

I think this flatters us, although that’s not the intention here.

Lyon approached the game against them by fielding a reserve side. We took on Lyon last night by doing the same. Neither ourselves nor the French giants took this remotely seriously; it’s not clear that Nice did either.

Only Sevco believed that this could be significant, and that was partly because we were there.

I said weeks ago that this “tournament” was patently ridiculous and we should have no part in it, suspecting it was a joint effort to promote the discredited Old Firm brand again. We’ve enabled this drivel just by appearing alongside them, but instead of being angry about that this evening I actually feel that it’s pretty hilarious.

Sevco fans are united in believing this has struck some kind of psychological blow against us; to me, that proves just how much emotional damage we’ve already inflicted on them. That they would cling to something like this is a mark of how hard they’ve taken the last four years, that something this small and pathetic offers them a crumb of comfort.

This is what “success” looks like to them now.

It often makes me think of a great literary comparative; JRR Tolkien’s beautifully written contrast between Saruman’s Isengard and Sauron’s “vast furnace of power” Barad Dur, the Dark Tower, which the white wizard had tried and failed to copy, making instead something more akin to “a child’s model or a slave’s flattery.”

That’s Sevco, built to look like Rangers but coming up short.

The club at Ibrox is a long way from where they see themselves. It is another proof that Sevco is not Rangers, even though they were not as substantial as they seemed and were simply a shadow projected onto a wall, making them look bigger than they really were.

Sevco’s problem is that it labours under a mighty delusion that it cannot seem to rid itself of; that they are, in fact, a huge club, beaten down and still a little weak, but needing one triumph to spark a renaissance.

They believe they are Rangers, without understanding that Rangers was the “tragedy”, the failure, and that they, in turn, are repeating that history, this time as farce.

Think about it; they are celebrating winning a “trophy” from a pre-season “tournament” as if it were a major honour.

That’s how far they are from a place where they will win the real thing.

Deep down, these Peepul know it.

But they have to keep on believing, because that’s the only way they can prop up the vast fantasy that underpins the Survival and Victim lies.

The history of the last Ibrox club is, to paraphrase Joyce’s fictional author Stephen Dedalus, the “nightmare from which they are trying to wake.”

May they continue to sleep soundly, whilst Scottish football laughs at them.