Celtic Linked With Spanish Wonder-Kid. Does It Mean Our Scottish Target Is Still An Option? 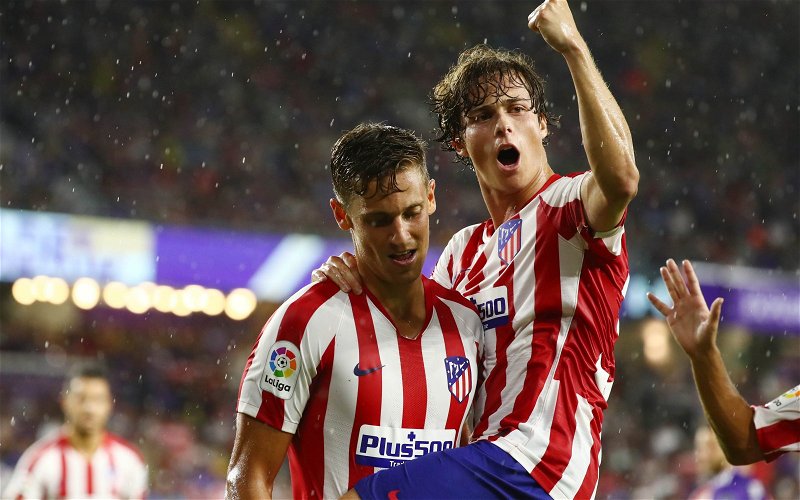 Stories in the paper today link us again with Rodrigo Riquelme, the talented young winger from Atletico Madrid. This is not a new story; this one surfaced towards the end of the last season too, and he is clearly a player we fancy, even it’s just as a loan.

He plays behind the strikers. Which begs the question; why would we bother?

We have three players who can play there quite comfortably – Rogic, Christie and Ntcham.

We can also push Callum up into that slot, or bring Forrest more central. We can even get Mikey Johnston to take a turn in that slot. We’re flush here, so what is this?

And more to the point, does it mean that we’ve not yet given up on Motherwell’s midfielder David Turnbull, a deal I think most of us assumed was dead? Because he and Riquelme play in near enough the same position. If we’re looking for someone in that slot then surely the bhoy closer to home must remain in our thinking as well.

What does this mean for the current makeup of the squad?

I’ll tell you what my suspicion is; it would spell the end for Tom Rogic, who is an unusual player in that he really does only play in one role.

Whereas Christie can play out wide and Ntcham can play through the middle and add a little steel to the midfield, Rogic simply fills that single role … and that may hurt him when it comes to this team, as Neil Lennon likes a little versatility in his players.

It is hard to see any of the other midfielders being allowed to go; they all played such a critical role in the season, whereas Rogic made less a dozen appearances through the campaign. That suggests we might not even particularly miss the player.

Which is a great shame to write, because on his day he is an outstanding player.

We just don’t get enough of those days to justify the slot in the team, and especially when we could be filling it with a real up and comer and both Riquelme and Turnbull are young footballers with it all in front of them, and the Scot in particular because he ticks one other crucial box; he is a Scottish domiciled player, which counts towards our European squad.

The Riquelme thing could be paper talk, but the fact we’ve had scouts watching Turnbull recently very strongly suggests that this is an area of the pitch we are looking at. What that means for the players who are at the club is anybody’s guess … but if I had to take a stab at it I’d suggest that we might be nearing the end of the line for the big Aussie.