This seems like a daft question, and I know it already, but it needs to be asked as at least one Celtic site is reporting it as a fact; Radio Clyde has claimed that the virtual season tickets will not permit fans to watch Celtic matches which are also being shown on Sky.

Is this true or not?

Celtic’s own circular to fans during the renewal campaign quite clearly says the opposite.

So somebody is lying here; is it the club or is it the radio station?

The claim tonight is that Sky has exclusive rights to games which it chooses to show, and the Virtual Season Ticket will not feature these matches.

That’s as straightforward a statement as you could hope to find.

Yet the SPFL trumpeted the deal for Virtual Season Tickets as one that had been made with the support of the broadcaster … implying that they were on board.

Celtic made the same claim.

Now, if this was a clause in the deal – and the virtual season ticket does not cover those games – then Celtic has blatantly misled the supporters on this when asking them to buy season tickets. The biggest home games are going to be denied to them because Sky has the opportunity to screen those live instead.

This would be an outright scandal if true.

Let’s look at the precise wording of what Celtic said in their circular.

On the question as to what matches would be available to virtual season ticket holders it said this;

“Where any games included within your Season Ticket have to be played ‘behind closed doors’ or with a reduced capacity as a consequence of the Coronavirus pandemic, you will be provided, free of any additional charge, with digital access to such matches via a new Club platform being specifically created by the Club for Season Ticket Holders for Season 2020/21.”

It is clear and unambiguous.

There is not the slightest qualifier in that statement, not one.

Another question touches on the role of Sky in this, asking if a Sky subscription will be needed in order to access these matches, and Celtic’s circular is equally clear.

There is yet another question – as if things weren’t clear enough – on the circular in relation to this issue, and it asks what games are covered.

“All games included within your Season Ticket which have to be played ‘behind closed doors’ or with a reduced capacity as a consequence of the Coronavirus pandemic will be included within the Virtual Services.”

Not “some games subject to contractual obligations.”

I cannot say this enough times; the media reported that Sky supported the creation of these tickets.

A Daily Record Q&A stated that even Sky subscription games would be covered under the deal, and that was almost certainly briefed to them by someone involved with the clubs and/or the governing body.

That assertion has been allowed to go unchallenged this whole time, and therefore has to be taken at face value and assumed to be true.

At no point in the course of the last few months, when this has been one of the most discussed aspects of Celtic’s operational profile in decades, has the notion that Sky Sports had exclusive rights to certain games been remotely presented and I could not see any way in which that would have been allowed to go unopposed it it were otherwise.

If Clyde has actually got this right – and by the way, that was always a huge if – then at the very least Celtic would have grossly misled the supporters, not to say flat out lied to them.

The details in that circular would, therefore, be as clear-cut a violation of the Trade Descriptions Act as you’re likely to find … a wholescale falsehood uttered to get people to part with their money expecting a service they didn’t get.

Celtic’s circular also says there will be no refund scheme for these games; they’d have a lot of luck getting a claims court to agree with that if they’d knowing deceived people. Not only would those games be eligible for refunds but the whole season ticket would have been sold on a false prospectus.

For that reason and that reason alone, I was calling bullshit on this one even before I heard that the club, via the SLO, clarified the position only this morning … 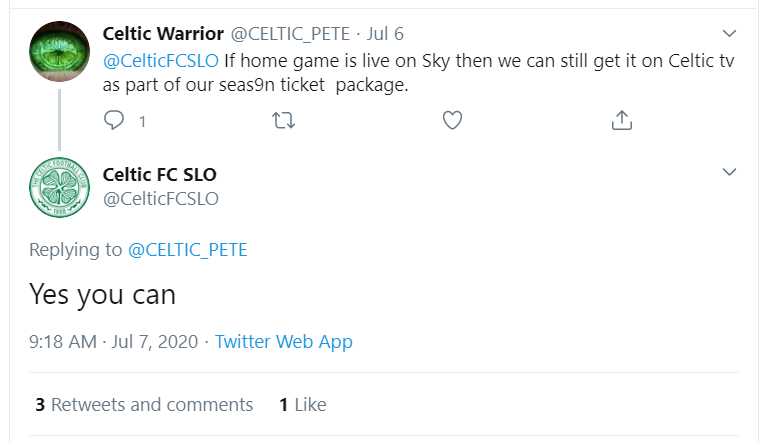 Celtic have been so unambiguous in their previous statements I cannot see any way in which they could have rolled that back without the direst PR consequences and the inevitability of having to refund many, many, many thousands of people.

Frankly, if Celtic did do that then people inside the club should pay with their jobs.

Here in the real world, I wonder if someone at Clyde will pay with theirs should Celtic further clarify this matter to our satisfaction?

I very much doubt it folks.

UPDATE: Clyde has, in fact, “clarified” its own nonsense tonight by tweeting the following;

Notice that this isn’t an apology to our club, or to its own listeners … they have no shame whatsoever and no standards to speak of.