Sevco’s Club “Crest Launch” Has Veered Into Self Parody With Bizarre “Our City” Claim.

Well now I reckon that Sevco’s public relations team has lost the plot.

In a series of tweets today which are so hilarious that you wonder if the club has lapsed into self-parody, they are “projecting” their new crest onto a number of Glasgow buildings.

And if you think that sounds crass, childish, moronic and tacky take a look at this; 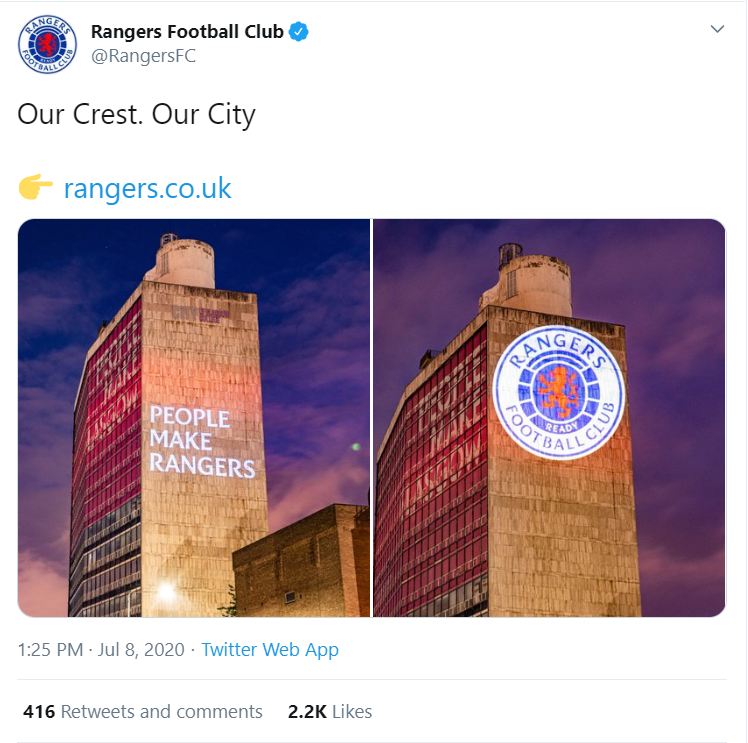 Does it get more bizarre than that? What is that club doing? Is it begging to be laughed at and mocked?

So Glasgow belongs to the second biggest team in it?

The team who’s history doesn’t equal, far less surpass, even our other two clubs at Thistle or Queens Park?

Glasgow belongs to them?

And People Make Rangers? What does that even mean?

That one has the merit of being true at least.

Because it is The Peepul who do make Sevco, and surely only the thickest, most backward, hillbillies could find this impressive?

Silk hat on a pigs, anyone? Glitter on a turd, anybody?

Is the club that really preeens and presents itself as the biggest in the country really going so OTT over the re-design of a badge?

In the news at the same time is that they are trying to sign Florian Kamberi from Hibs again, on another loan … and you hear that and you see this and you wonder “Has their support collectively lost its mind?” Those in it who are not demanding answers, not demanding to know what “the plan” is to stop Celtic really need their heads read.

Can you imagine if this was us?

Good God, the press would murder us.

Instead of stability, Sevco has stunts … and this just makes them look utterly ridiculous.