Aaron Hickey Set For Bayern. Celtic Still Lose Out On Too Many Good Young Scottish Players. 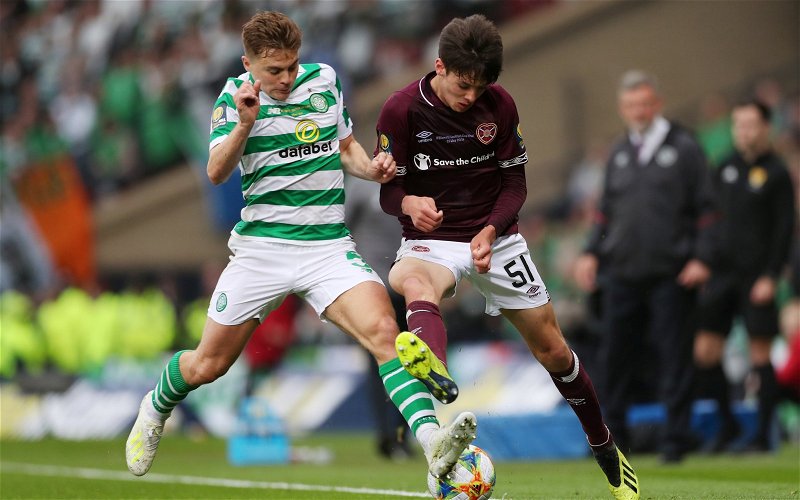 I don’t know how serious Celtic were about trying to sign Aaron Hickey.

I don’t know if Hearts were telling the truth when they said we’d tried to sign him “six or seven times” in the last few years.

I don’t know if we were interested in him in this window or not.

It might well be that Celtic didn’t rate him, or that we didn’t think he was worth the money it would have taken to sign him.

I don’t know any of that, and for this reason if no other I’m not going to give the club a hard time over his not being a Celtic player.

To be honest, I never thought he would sign for Celtic if other options were available.

He’s left Celtic Park once before when a contract was on the table for him, and I didn’t really believe that he was going to turn down the German super-club if their offer was real, as it appears to have been, I thought he’d go there. It’s the smart thing to do, if he’s convinced of his own talent.

I think – I know – he’ll struggle there. The level of expectation will be enormous.

Other players will be competing in that position, and they will have more experience and a higher profile than he does. For the next few years he has to get used to fewer games if he plays in the first team at all. But the move is a good one if he has the talent to make it.

Whilst not blaming Celtic directly, I cannot help but express my regret that yet another young Scottish player of apparent pedigree has slipped through our fingers. I wrote a lengthy piece on the Scottish based players we could go for in this window just this weekend.

You can read it here.

Hickey was on that list. Others on the list, like McKenna, Porteous and Souttar play in the central defensive position where we need cover. There are two midfielders, Campbell and Turnbull at Motherwell, one of whom we’ve already tried to sign. There’s Martin Boyle at Hibs. These guys are all talents, and Boyle aside all in their early 20’s or younger.

Ryan Fraser left Aberdeen and made it in the EPL.

He was so highly rated Arsenal were sniffing around him at one point.

John McGinn has gone to Villa, in the most high profile reversal in a long, long time.

In this summer window we’ve been linked to James McCarthy and Steven Fletcher; both would have been exceptional signings when they left this country to go down south … I don’t even know if we tried for McCarthy, but until McGinn it was the most shocking example of Celtic letting an obvious star get away from us, all for want of a few quid.

This is a difficult business we’re in and for every one of those guys there might be a Jack Hendry or a Scott Allan.

But none of us rated Hendry in the same bracket as a McGinn or McCarthy, and Scott Allan, although talented, signed for us at a time when we had no requirement whatsoever for a player in his position, and it still seems to have been done to one-up Sevco as much as to improve our squad.

He never looked likely to make it at Celtic Park.

You can tell who the real players are; they stand out a mile. McGinn was quite simply the best Scottish born player in the country outside of Celtic Park and that was obvious to everyone who knew the first thing about the game here, and for a couple of years at least.

I think Campbell at Motherwell looks like a standout right now, and if Turnbull is fit he’ll go far.

Martin Boyle could easily deputise for Forrest and challenge him for a place.

I think Souttar and Porteous would make good backups.

McKenna could be the biggest hit of all, or the biggest miss … my view on him changes like the weather. I’m unconvinced … but would love to be.

There are good players in Scotland.

Hickey didn’t stand out to me as he did to others – I don’t watch Hearts enough – but the scouts from one of the biggest clubs in the world thought he was worth taking a chance on. The Celtic scouts liked him enough to make offers to bring him back to Parkhead.

Doubtless, there are other unappreciated players out there, or up and comers who are just waiting to explode onto the scene.

These guys will be young and hungry, but the thing is, they’ll stand out from the crowd. We must be ever watchful for that, and ready to swoop.

We must have good Scottish talent at the core of this club.

Hickey has probably gotten away from us, and if he goes on and makes it big he’ll join a depressing little list which include Andy Robertson, Fletcher, McGinn, McCarthy and others. Our record in bringing through players is great.

Our record of signing the best in Scotland remains impressive, with the likes of Brown, Armstrong, Christie, Griffiths and more recently Taylor.

But I still get a little frustrated when I see good ones slip away.

Our record on this could be better.

Our record on this could do with a little improvement.