Yesterday there were queues outside the Sevco store. Socially distanced queues, but queues nonetheless.

They were different from those who have lined the pavements at the Celtic Ticket Office and at our numerous shops around Glasgow.

There was no jovial conversation, no looking forward to the weekend’s games.

These folk were sullen and angry.

If there was conversation at all it was to compare horror stories.

Tales of shirts with peeling badges.

Tales of deliveries arriving weeks late with the wrong stuff in the packages.

Tales of how folk who spent hundreds of pounds discovered identical products minus the Castore “branding” on sale much, much cheaper … generic junk tarted up to look good.

These Peepul were not there to purchase additional items.

They were there to return stuff they had already bought, and in some cases already worn.

Many of them would have been disappointed. Cash refunds would not have been given in many cases.

Exchanges were not allowed at all.

Read your terms and conditions, Peepul. It’s all in there.

What many of them failed to realise yesterday was that Castore’s statement pretty much ruled out returns.

If you got a Turkish strip and you were angry at not getting a Chinese one, too bad.

Because you got the product they intended to sell you all along.

If you bought a generic top with Castore’s badge sewed on it and then found out you’d bought a school jumper, well that’s too bad too but as long as they didn’t explicitly say it was premium gear they broke no laws. They are under no obligation to refund you.

You have to love the mentality behind what Castore has done here.

There hasn’t been anything this blatant since Del Trotter was flogging Peckham Spring.

What is it he says in that glorious episode of Only Fools and Horses?

That they are just “re-packaging” the water that Thatcher had already sold off and selling it back to the public again?

That’s what we’re talking about here, you know. Exactly that.

Buy a bunch of generic shirts. Stitch a couple of badges on them.

Advertise them alongside premium materials.

Flog them to gullible football fans desperate to show how staunch they are.

We laugh because it’s funny, but we laugh nervously because in another time and place we suspect that this could be us.

We suspect that it has been us.

Still, you need a heart of stone not to be on the outside of this and not find it hilarious.

This is just … perfect. In every way.

And each day brings fresh developments. Yesterday, as fans were queuing to return their Peckham Spring kit, the club posted a picture on its website of Jermaine Defoe in training. Presumably the players are wearing pro-kit, right?

That’s why the flaky condition of the badge on the shorts was hilarious and brilliant.

Their forums erupted. “This is the club’s official media promoting this embarrassment,” one fan raged. 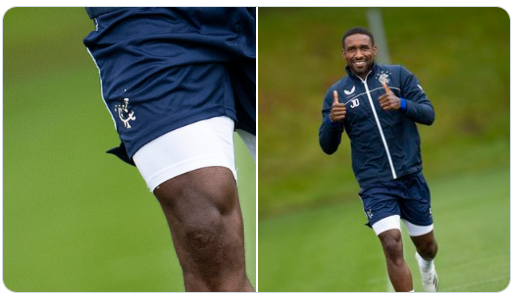 No sooner had those pictures made the rounds on there but the club had taken the image and cropped it, so their humiliation wouldn’t be evident on their own site.

Too late though, as the original picture was already out there and in wide distribution.

Oh dear. Their PR department hasn’t improved one bit, has it?

And this came hot on the heels of the news that the notorious shoddy goods website Alibaba are advertising cheap replica Sevco tops from this year, minus only the Castore logo – in bulk, at wholesale prices, and from China of all places …. which would make even the dumbest person prick up their ears and wonder …

“This surely can’t be the same company supplying the kits, can it?” 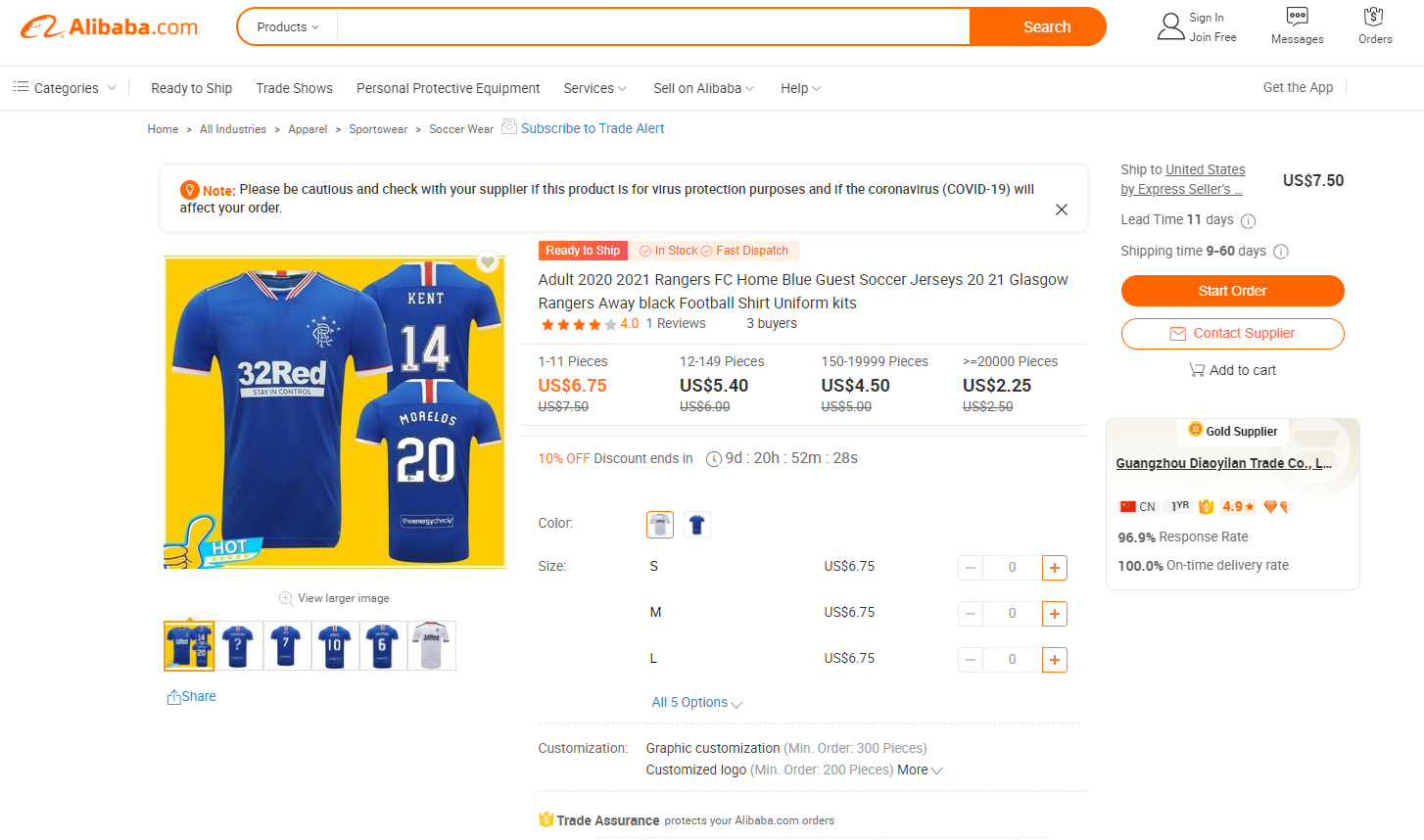 Well, I don’t know about alibaba … but the Forty Thieves are certainly having a field day with this lot.

I mean, look at that wholesale price.

20,000 pieces for a little over two American dollars a shirt.

Look at that and wonder how Castore intends to fill the order, with no manufacturing capability of its own.

Look at that wholesale price and wonder if the scam isn’t bigger than it looks.

Because this is mental stuff here, folks.

We’re talking about a company whose total turnover was mid seven figures before this … a company which, as we all said at the start, has no history in mass producing gear. We all said that a premium product was impossible at these kind of levels … and so it has proved. But are they actually this desperate?

Are Sevco fans actually this gullible? Well, of course they are.

Look, you have to consider all of this in context.

One of the first things Sevco’s new commercial director did when he got the job was to actually place an ad asking for kit manufacturers to get in touch with them. To put out the begging bowl and solicit interest. Do you think Celtic has ever had to do that? Think we ever will?

The club’s reputation with suppliers has been in the toilet for years. The only hope they had was that some fly-by-night operation took a punt … and along came Castore at just the right time, probably trading on their relationship with Gerrard.

If we had a media worth a damn, they’d have asked serious questions here.

But we don’t, of course, and that’s the problem. They accepted this “premium brand” nonsense and did even less due diligence than the Ibrox club seems to have done … or perhaps the Ibrox club, in their own desperation, knew exactly what they were getting and just didn’t care.

I said right at the start of this that with the global health emergency nobody was going to easily source the raw materials for this, because for months on end nobody was working in any of the factories that could have mass produced this stuff. So it has all the hallmarks of a rush job, put together at the last minute.

Do not be surprised if that gear turns out to be exactly what the Sevco fans are wearing right now, dressed up to look good with a Castore logo.

I mean, how else do they think that is being done?

How else do they think this has happened?

Celtic’s Adidas shirts are probably made in a very similar factory, in a very similar way … except that Adidas have a rep to maintain and will care about quality control, rather than just proving that they can meet the vagaries of supply and demand.

This is Castore’s first major deal, and fulfilling the order will take precedence over the quality of it.

They got the perfect club for it too, because for every fan complaining online there are doubtless more who are perfectly happy to wear cheap tat at an outrageous mark-up because “all the money goes to the club.”

Actually, it goes to overpaid, sulky footballers and to paying the electric bill, but that’s par for the course at any club these days.

Remember too, that in that famous Only Fools episode Peckham Spring was becoming a trendy brand before its origins were discovered.

Yes, we can laugh. Stick a fancy label on anything and mugs will queue up to buy it.

Remember that John Sullivan wrote that episode after reading that Coca Cola’s first foray outside of soft drinks came apart when it was discovered that they, like Del, were selling tap-water.

There is nothing new under the sun, folks, remember that.

How does that saying go? “It’ll all come out in the wash.”

In this case, I’d take that literally … and if I were a Sevco fan with one of those “premium” tops from China, I don’t think I’d put it in the machine with anything I wanted to wear again.