The Collapse Of Barcelona Shows Why Celtic Must Take Transition Planning Seriously. 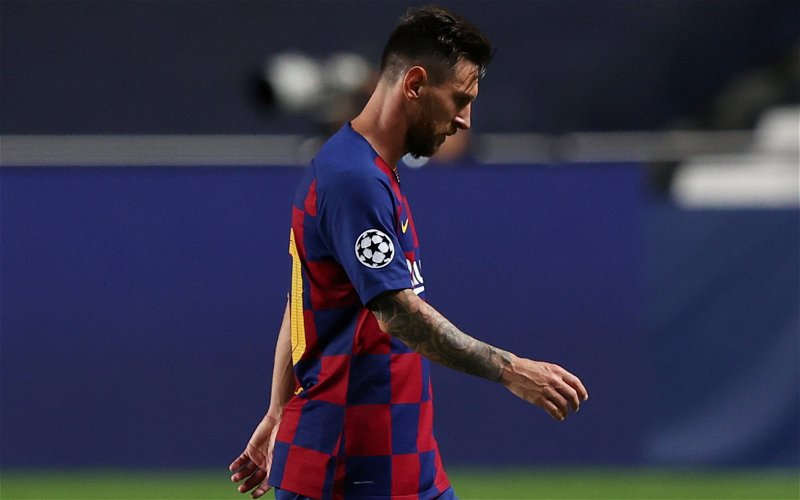 Friday night saw the final collapse of an empire.

It was not the first empire to rise and fall at the Camp Nou and it will not be the last.

Over its course it has produced Champions League winning teams which ranked amongst the finest ever to play the game, and it gave us the world’s greatest ever footballer.

Along the way, the core of that team won a World Cup and a Euros for Spain.

It gave us one of the most frightening, and prolific, forward threes of all time. It dazzled and delighted. When Barcelona were on form they were the most destructive football force the club game has ever seen, capable of dismantling any opponent, no matter their calibre.

Were there shock defeats along the way? Of course there were, and we inflicted one of the most famous, at Celtic Park, on that incredible night in November 2012. Yet the team we beat recovered to go on and become ever more dominant and impressive.

Little by little, the cracks had begun to show.

In 2017 they were hammered 4-0 by Paris St Germain, a defeat that was conveniently – and foolishly – set aside in the aftermath of the incredible comeback in front of their home supporters. They ought to have heeded the warnings, but they didn’t and in the very next round Juventus took three off them in Italy.

There was to be no comeback from that.

That summer, they had a chance to do a rebuild, and failed to. That hubris met its nemesis in Rome, as they travelled there with a 4-1 lead from the home tie only to fall, spectacularly, to a 3-0 reversal which knocked them out of the great competition once more.

And last season it was the turn of Liverpool to ruin everything, after Barcelona rolled into Anfield with a 3-0 lead and somehow contrived, again, to crash out of the tournament. These ignominies were not all a series of freakish coincidences; they were the warnings that things needed to change, that the club needed rebooting, that the glory days were over.

Those warnings, too, went unheeded and on Friday came the greatest reversal of them all, a profoundly numbing lesson, which the word “rout” doesn’t truly do justice. Barcelona, the great swaggering conquerors, were annihilated by Bayern Munich who found the net eight times and could have run up the score even higher.

No football empire has been so thoroughly crushed since Brazil’s brutal humiliation at the hands of Germany, on their own turf, in the World Cup Semi Final of 2014.

There are lessons here for those who wish to heed them, those who want to learn in a way Barcelona failed to.

When Germany was routed 5-1 by England in Munich in 2001, the entire national game was upended and football rebuilt from the youth coaching all the way up. The national team had been in decline for years; that was the turning point, which led, in no small part, to the thrashing of Brazil thirteen years later, and the winning of a World Cup.

Catastrophe can only be averted if decline is recognised and measures to reverse it are put in place.

Managed transition between one era and the next is how football dynasties are built. Barcelona relied on the same core of players for far too long; that is the first step towards disaster, and it was evident for a number of years before the final collapse last week.

There are no signs of our club being on a similar trajectory. We continue to win things.

We continue to dominate in Scotland. Brown may be looking a little leggy but he’s the oldest player of what is still a very young squad. And whilst there are a core group of players here, the personnel have undergone a lot of rotation over the last couple of years.

This team of ours has been fabulous over the years, but when we say goodbye to someone like Lustig or Simunovic or, eventually, Forrest or McGregor it will not simply be that we want the money or we want to free up wages.

There is no such thing as “managed decline”, it’s only decline that goes a little slower than the other kinds. The objective should be to manage your way out of it, not to control the descent. Say whatever you like about Brendan Rodgers, but he knew that.

He was clearly planning to move Celtic from one iteration to another … I hope Lennon has the same plan.

Time is still on our side here. Our squad is young enough that there are years left in these players, and one of the problems Barcelona had the other night was an ageing midfield and central defence which was overwhelmed by Bayern’s pace and power.

Yet even youth is no guarantee that a team will continue to perform if it’s kept together too long. The master at this stuff was Alex Ferguson, who’s Manchester United teams were in constant flux, changing from one form to another as time marched on.

Paul Brennan at CQN has talked about how this Celtic side will most probably break up at the end of this season whether we win the title or not. Ten in a row is what some players have stayed for, he said, and that others will be shipped out as we look to the future.

This would not be a disaster, as long as the plan was in place for the next great era of our club.

One of our biggest problems in recent years was that we allowed the defence to stagnate; last season we signed four fullbacks and a central defender because that was the area of neglect and where we needed to make the biggest changes.

That’s a positive sign, although we should never have left it until a full-scale rebuilding of the defence was necessary. This year, we need to see smarter transfer business … and the signs are good so far that we’re going to get our recruitment right.

The solidity of our club, the core of players who the rest have been built around, is one of the reasons for our success, of course. Teams grow together, but they also start to slide together. It may be the right thing – it almost certainly will be – that this one starts to break up before the decline begins.

It will be sad to see it, but it is necessary.

The alternative is to watch as it starts, and perhaps to realise too late that the slide has become a full-scale collapse. Barcelona have just learned one of the hardest lessons I’ve ever seen handed out in football. This one, they cannot ignore … and neither should we.