Ex Celt Tony Watt’s Failure And A Question: Whatever Happened To The Great Scottish Striker? 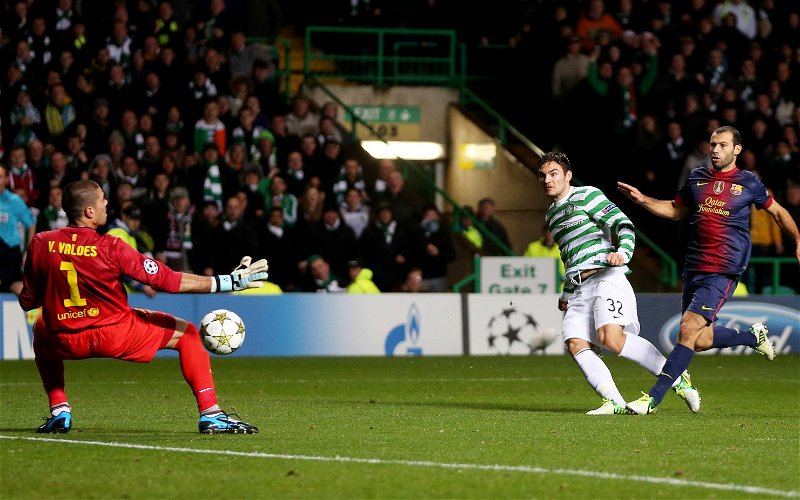 Scotland plays this week. I mention it because some people don’t know, and others don’t care.

I’m one of the latter.

The SFA inspires no loyalty. It has earned no devotion.

The national team fell from our thoughts when McLeish got the job.

He’s no longer there, but those who hired him are still in their posts and so the stink of that decision remains.

Lyndon Dykes has been named to the squad as a striker. Leigh Griffiths absence is glaring. Without him Dykes is what we’re reduced to, that and the fading talents of Steven Fletcher.

Forget McBurnie; I’ve seen nothing from him to suggest he’s a player.

Ewan Paton, of The Sun, couldn’t resist slipping the words “Rangers daft” into today’s headline saying McBurnie had pulled out of the squad.

I don’t know a single Scotland fan who cared.

Let me tell you, if he wasn’t a follower of the eight-year-old Ibrox NewCo the media wouldn’t care one whit about him either.

We played Motherwell at the weekend, and for me as a sometimes Scotland fan there was a moment which summed up our national plight.

Tony Watt came off having done absolutely nothing in the game.

It was grim watching that guy trudge off the park having made no impact whatsoever, playing for the club he made his first appearance and scored his first goals against, at the ground where he had scored one of the most famous strikes in the history of our club.

If anyone had told you, that night, that at 26 he’d have scored less than 50 times, that he’d have a single, solitary international cap and that he would have left Celtic just a year later, initially on loan to Lierse, and that he’d been at ten clubs in the seven years afterwards … well, nobody would have believed it.

In 2017, with his career going nowhere, he nevertheless gave an arrogant interview in which he said that Scottish football was in a dreadful state and that he didn’t see himself playing here in the next five to ten years.

Three years on, as I predicted at the time, this is exactly where he’s ended up.

And he’s not setting the heather on fire.

Watt had made his Celtic debut at Celtic Park against his current club, in the season he scored the Barcelona goal.

He came on and scored twice in five minutes.

His full debut was against Inverness away and he scored another two.

When he came on as a sub for Mikael Lustig that glorious night at Parkhead and showed such alertness, cool and composure to score against the biggest club in the world game, I don’t think any of us doubted he was a major talent.

And that is a double tragedy, for the player and for his country.

Watt was the last major strike-force talent I can remember emerging in Scotland save for Griffiths, and this is the country that used to turn out quality strikers as if on a conveyer belt.

Indeed, our club itself was famous for it, having produced, in my lifetime, two of the finest Scottish strikers not just of their generation but of any generation in Nicholas and Dalglish.

Who was the last truly excellent striker we brought through on our own?

Who was the last truly exceptional Scotland forward?

They used to produce cracking strikers at Ibrox as well as Celtic Park; how long since they produced one?

Longer, even, than we last did.

The national team has suffered for this failure.

Part of it is the modern tradition of our club signing foreigners.

Watt’s time at Celtic Park came to a premature end in part because we’d bought Pukki and Balde in the 2013 window.

Neither of them turned out to be worth a damn, although the Finn has had a career renaissance of sorts since.

Had Watt gone on to be a prolific scorer elsewhere that might have come across as a great historical mistake but he never did, and probably never will.

Every now and again, a hopeful will emerge at some other Scottish club.

Steve May was a good example, and of course the more recent one is Lawrence Shankland.

These guys blow hot and cold.

None has looked remotely as predatory as Griffiths nor as likely to be a success at Celtic Park, which is why we went and spent £5 million this summer on a West Ham reserve when Shankland would have been available at a fraction of the price.

There is no question that we’ve done the right thing there, but I do sometimes wish that there was an obvious star out there who had been produced in our league and who was blazing a trail as the best marksman in the country.

Then we wouldn’t have to watch guys like Dykes be talked up as international class players whilst the national coach waits to see if Griffiths will ever be fit for duty.

This isn’t limited to forwards, of course; we used to produce world class central defenders as well and we don’t do that anymore.

We’ve got a few outstanding midfielders in McGinn, McGregor, Christie, Armstrong and Turnbull, and of course we’ve produced two world class left backs … but it’s been ages since we produced a defender on a par with McLeish himself in his prime … for all I wish it were otherwise (because he’d already be in the Hoops) McKenna doesn’t look like he’s that.

I don’t buy this idea either that we do produce them but just don’t give them a chance.

Kieran Tierney broke into the Celtic first team squad when he was a teenager. So did Mikey Johnson.

McGinn was a Hibs first team footballer as a teen, and so was Scott Brown.

Turnbull and Allan Campbell at Motherwell have been in the squad since before their 20’s.

Class stands out a mile, and that’s why these players get noticed and get played.

It is nonsense to suggest that Celtic has a Shane Duffy type player in the reserves, and we’ve just never given him a chance.

There is talent there, to be sure, but it has to developed and brought on properly but there’s nobody who could step in and do that job right now, just as there’s no up and coming hit-man in the youth academy blasting through the record books.

Scottish football just doesn’t turn these guys out anymore, and when I saw Tony Watt trudging off the park the other day I lamented that fact, the waste of his talent and his career not just to Scotland but to Celtic, because he could have had it all, including a place in the 100 Goals club that Griffiths was good enough to seize and which Forrest is about to.

One day we will see a genuine international class – perhaps even world class – forward break through in Scottish football again, and the chances are that it will be at Celtic Park.

You just wonder if he’s already there, playing at some level, waiting for an opportunity to start smashing his way through the youth leagues and staking his claim … but if he is we haven’t heard of him yet.