Sevco’s Super Yacht Story Is Tacky And Shameful When They Are Laying People Off At Ibrox.

I guess some of you will have seen the story about Sevco and the “super yacht” their players will be staying on during their trip to Gibraltar.

It’s less because it’s not a super yacht exclusively for the elite; it’s a hotel that you or I could book into for as little as £140 a night … and it’s more because this was leaked by the Sevco media department to make their club look bigger than it is.

And that is very telling, isn’t it?

That club continues to act as if the unravelling of the economy and the world at large isn’t happening.

This is yet another effort on their part at pretending that the cold winds of crisis which are sweeping over all else aren’t affecting their club one bit.

It is posturing of the worst sort. And it must be especially painful for some of their supporters to read this kind of stuff when they have very real concerns over how much they’ve been asked to put their hands in their pockets over this summer, and for what.

With the Castore Catastrophe still unfolding, and with Club 1872 pulling itself apart over that affair, with the MyGers scheme locking fans into a permanent cycle of spending, with season ticket prices increasing and a wage bill at the club which continues to spiral upwards there are a lot of their fans who wonder what the future holds.

We’ve told them that, by the way; get used to putting your hands in your pockets, and finding the club’s hand is already there.

Where this story today really leaves a bad taste in the mouth is when the club itself is actually starting to make people redundant. 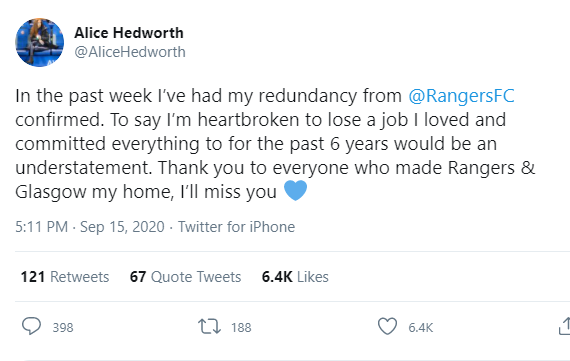 Phil wrote a superb piece yesterday on this, and the girl in question was obviously devastated and has won a lot of plaudits on Twitter for the job she had been doing up until this week.

At a time when people are losing their jobs, for them to be preening and strutting and boasting on how much they are spending on taking their club to play a bunch of part-time footballers, is astonishingly, stunningly, crass and insensitive.

Bear in mind, at a time of severe austerity, when their fans are struggling, when their staff are under the gun … they leaked that story to their media pals.

You wonder what goes on in their heads over there.

But this is Sevco we’re talking about after all, a club without pity.

A club without shame.