Shane Duffy’s Leadership Is The Real Kind. Celtic Must Secure A Permanent Deal For Him. 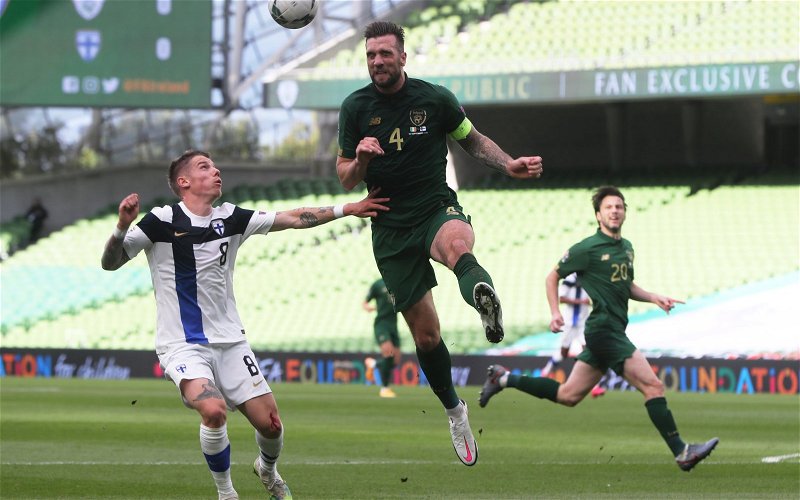 Leadership takes many forms … like that which the SFA has shown itself to be so incapable of offering.

What a contrast between their gutless and selfish form of it and that which was shown by Shane Duffy this week, as the captain of the Republic of Ireland.

After the game in midweek, in which he scored a brilliant equaliser, he spoke to the press and was genuinely fed up in spite of his very decent performance. He took full responsibility of the goal his side had conceded, although I felt watching it that the coaching and the setup were probably a bigger issue than his own positioning.

Still, I was interested in the way he didn’t’ try to shirk his responsibilities and took that one on the chin for the team.

The other night, they slumped to an awful result against Finland, and he didn’t have a great game.

He is still some way short of full sharpness, and he acknowledged as much when he spoke, again, in the aftermath of the match. I could listen to this guy all day, because he really does lead from the front and assumes every bit of the criticism for the rest.

More than that, in spite of the results he was determined to be upbeat and talked about how he and the other players are still trying to adapt to Stephen Kenny’s new system. Duffy talks a lot of sense; you can tell there’s a tactical brain in his head, but it’s the way he puts himself forward as the lightning rod for others that shows one of his biggest qualities.

We are looking for a few more leaders in this team. Ajer, McGregor and Jullien are all capable of stepping up when Brown is gone, but you wonder if two of them have a long term future at the club and whilst those questions persist they are the wrong folk to be considering giving armbands to.

Duffy is here on a season long loan, but Celtic is already looking beyond it.

Scott Brown will probably retire at the end of this campaign, either with the glory of ten as his crowning achievement or in the crushing disappointment the whole club will feel at letting it slip away from us. We are going to need a figure of some stature to replace him.

Duffy might as well be auditioning for the part right now.

Celtic wants him on the long term contract, and I think he’d love to join.

Sweeten the deal with the promise of the captaincy and I think that could swing it as long as the clubs can agree on a fee.

This guy is the real thing, a real leader from the front, what any football clubs wants in a captain.

This answers a huge question which has haunted all at Celtic Park for an age. Duffy is 28, he has years at the top of the game in front of him.

I cannot think of a better, or more substantial figure to build the next phase of our club’s success around.

Get the deal done, Celtic, as soon as we can.